A gunman has opened fire in a southern California church, killing one person and wounding five others before churchgoers detained the suspect and hog-tied him in what officials called an act of “exceptional heroism”.

The mass shooting was reported shortly before 1:30pm on Sunday (20:30 GMT) at the Geneva Presbyterian Church located in the town of Laguna Woods, about 80 kilometers (50 miles) southeast of Los Angeles, the Orange County Sheriff’s Department said on Twitter.

A man died at the scene and four others were critically wounded, while a fifth injured person suffered minor injuries, officials said. The wounded included four men ages 66, 75, 82, and 92 and an 86-year-old woman.

All of the victims were of “Taiwanese descent”, Taiwan’s foreign ministry said in a statement on Monday, expressing “the most sincere and deepest condolences to those killed or injured in the shooting and their families.” 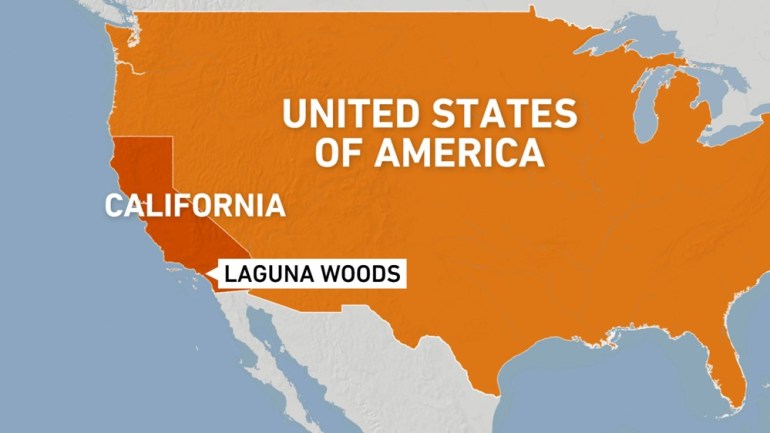 Congregant Jerry Chen, 72, told the Associated Press news agency he had just stepped into the kitchen when the attack occurred. He looked around the corner and saw worshippers ducking and hiding under tables.

Those who survived recounted to him a desperate scene: As the gunman stopped to reload, the church’s pastor hit him on the head with a chair while others grabbed his gun and subdued him.

Jeff Hallock, the Undersheriff for Orange Country, said when deputies arrived the parishioners had the suspected gunman hog-tied. The suspect, an unidentified man of Asian descent in his 60s, was taken into police custody.

“That group of churchgoers displayed … exceptional heroism and bravery in intervening to stop the suspect. They undoubtedly prevented additional injuries and fatalities,” said Hollack.

About 30 to 40 people were in the church when the shooting occurred, Hallock said, and two handguns were found at the scene.

“At this time, we do not know what the suspect’s motive may be or whether he had an intended target, or whether this is even a hate-related incident,” Hallock said, adding that authorities believe the suspect does not live in the area.

He said the many unanswered questions include whether the assailant attended the church service, if he was known to church members and how many shots were fired.

The shooting occurred at an afternoon lunch reception honouring a former pastor of a Taiwanese congregation that has services at Geneva, according to a statement from the Presbytery of Los Ranchos, a church administrative body.

“Please keep the leadership of the Taiwanese congregation and Geneva in your prayers as they care for the those traumatized by this shooting,” the presbytery’s Tom Cramer said in a statement on Facebook.

Carrie Braun, a spokeswoman for the sheriff’s office, said investigators were looking at many factors, including whether the bloodshed could be a hate crime, she said. The attack comes amid a spike in anti-Asian attacks and sentiment in the US fueled by the coronavirus pandemic and its original detection in Wuhan, China.

Federal agents from the Bureau of Alcohol, Tobacco, Firearms and Explosives were responding to the scene. The FBI was also sending agents to the scene to assist the sheriff.

A shooting at a church in Laguna Woods has left multiple people injured. This is upsetting and disturbing news, especially less than a day after a mass shooting in Buffalo. This should not be our new normal. I will work hard to support the victims and their families.

There have been several high profile attacks on houses of worship in the US in recent years.

In 2018, a gunman killed eleven and wounded six when he opened fire in a Pittsburgh, Pennsylvania Synogague, after shouting “All Jews must die”.

In 2017 in Sutherland Springs, Texas, a gunman opened fire during a Sunday service at First Baptist Church and killed more than two dozen people.

In 2015, gunman Dylann Roof fired dozens of bullets during the closing prayer of a 2015 Bible study session at Mother Emanuel AME Church in Charleston, South Carolina. Nine members of the Black congregation were killed in the racist violence and Roof became the first person in the US sentenced to death for a federal hate crime. His appeal remains before the Supreme Court.

Sunday’s incident occurred in an area with a cluster of houses of worship, including Catholic, Lutheran and Methodist churches and a Jewish synagogue.

California Governor Gavin Newsom’s office said on Twitter that he was closely monitoring the situation.

“No one should have to fear going to their place of worship. Our thoughts are with the victims, community, and all those impacted by this tragic event,” the tweet said.

The shooting came a day after an 18-year-old white gunman opened fire at a supermarket in a black neighbourhood in Buffalo, New York state, killing 10 people. Authorities were investigating the attack as a possible hate crime, the gunman believed to be motivated by racist ideology.

“This is upsetting and disturbing news, especially less than a day after a mass shooting in Buffalo,” tweeted Democratic Congresswoman Katie Porter, who represents Orange County in Washington.

“This should not be our new normal.”

Laguna Woods was built as a senior living community and later became a city. More than 80 percent of residents in the city of 18,000 people are at least 65.

The shooting throws the spotlight on mass shootings that have become a sadly familiar scene across the US. There have been over 200 mass shooting incidents in the US in 2022, according to the Gun Violence Archive, an average of about 10 a week. The tracker defines mass shooting by incidents where four or more people are shot or killed.