Every year on May 15, Palestinians around the world mark the Nakba, or catastrophe, referring to the ethnic cleansing of Palestine in 1948.

Having secured the support of the British government for the creation of a Jewish state in Palestine, on May 14, 1948, as soon as the British Mandate expired, Zionist forces declared the establishment of the State of Israel, triggering the first Arab-Israeli war.

Zionist military forces expelled at least 750,000 Palestinians from their homes and lands and captured 78 percent of historic Palestine. The remaining 22 percent was divided into what are now the occupied West Bank and the besieged Gaza Strip. 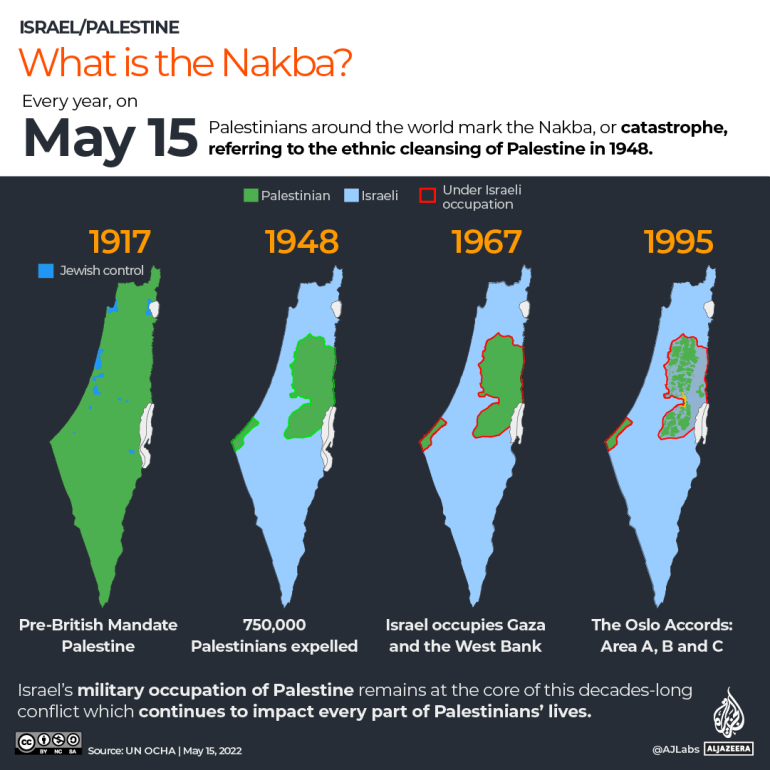 The fighting continued until January 1949 when an armistice agreement between Israel and Egypt, Lebanon, Jordan and Syria was forged. The 1949 Armistice Line is also known as the Green Line and is the generally recognised boundary between Israel and the West Bank. The Green Line is also referred to as the (pre-) 1967 borders, before Israel occupied the rest of Palestine during the June 1967 war.

Israel’s military occupation of Palestine remains at the core of this decades-long conflict that continues to shape every part of Palestinians’ lives.

Between 1947 and 1949, Zionist military forces attacked major Palestinian cities and destroyed some 530 villages. About 15,000 Palestinians were killed in a series of mass atrocities, including dozens of massacres.

On April 9, 1948, Zionist forces committed one of the most infamous massacres of the war in the village of Deir Yassin on the western outskirts of Jerusalem. More than 110 men, women and children were killed by members of the pre-Israeli-state Irgun and Stern Gang Zionist militias. 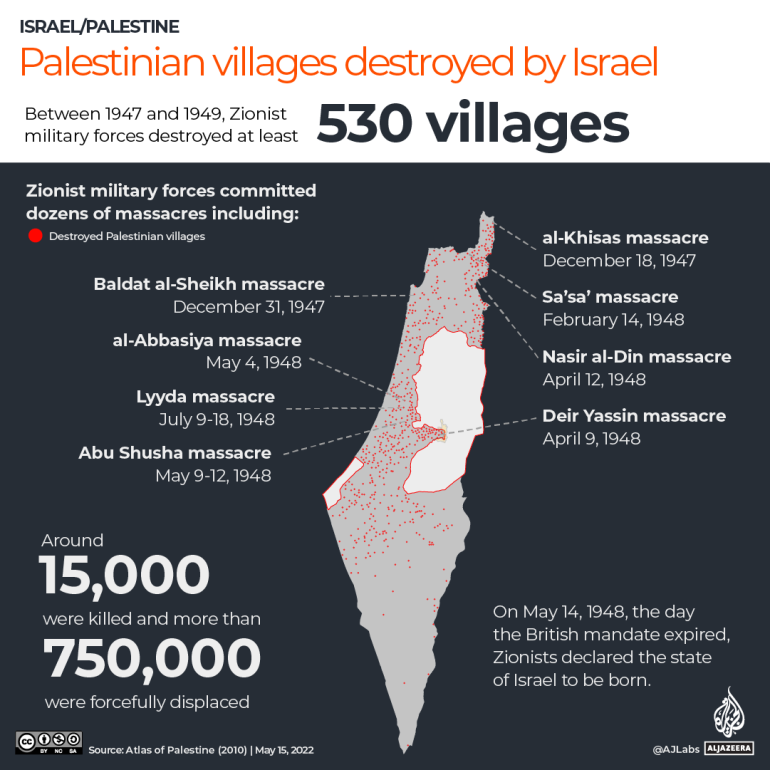 Palestinian researcher Salman Abu Sitta documented detailed records of what happened to these 530 villages in his book – The Atlas of Palestine. Al Jazeera has digitised these records in the interactive visualisation below:

Where are Palestinian refugees today?

There are some six million registered Palestinian refugees living in at least 58 camps located throughout Palestine and neighbouring countries.

The largest camps in each are Baqa’a in Jordan, Jabalia in Gaza, Jenin in the occupied West Bank, Yarmouk in Syria, Eand in El Hilweh in Lebanon.

More than 70 percent of Gaza’s residents are refugees. About 1.5 million refugees live in eight refugee camps around the Gaza Strip.

According to international law, refugees have the right to return to their homes and property from which they have been displaced. Many Palestinians still have hope of returning to Palestine.

The plight of Palestinian refugees is the longest unresolved refugee problem in the world.

In a damning investigation, HRW documented a range of Israeli abuses, including extensive seizures of Palestinian land and property, unlawful killings, forcible transfer, drastic movement restrictions, administrative detention and the denial of citizenship to Palestinians.

Every year, Israel demolishes hundreds of Palestinian homes. According to data compiled by OCHA, between 2009 and 2022, at least 8,413 Palestinian-owned structures were demolished by Israeli forces, displacing at least 12,491 people.

Israel also holds some 4,450 Palestinians – including 160 children, 32 women, and 530 administrative detainees – in prisons.

On April 17 every year, Palestinian Prisoner’s Day is commemorated to highlight the plight of those held in Israeli jails and their struggle for freedom against the Israeli occupation.

Settler attacks against Palestinians and their property are a regular occurrence in the occupied West Bank and occupied East Jerusalem, home to some three million Palestinians.

The Gaza Strip has been under an Israeli sea and air blockade since 2007. Since 2008, Israel has waged four wars on the Palestinian territory, killing more than 4,000 people.

Bordered by Israel and Egypt on the Mediterranean coast, the Gaza Strip is about 365sq km (141 sq miles), similar in size to Cape Town, Detroit, or Lucknow. It is one of the most densely populated areas in the world, and because of Israel’s continuing occupation has been described as “the world’s largest open-air prison”.

In its most recent bombardment of Gaza, which lasted from May 10 to May 21, 2021, Israeli forces killed 261 people, including 67 children, and wounded more than 2,200, according to the United Nations.

For Palestinians, Nakba is not a historical event, it is a continuing process of displacement that has never stopped.