Beirut, Lebanon – Voters in Lebanon crowded into polling stations with no electricity and little stationery, but what the voting centres lacked in amenities was made up for by a sense of hope.

“I hope for some change for my children,” Zeina Tabsh said after voting in Beirut on Sunday.

“I don’t want to have to leave Lebanon. I want change,” Tabsh said, explaining how she is currently unemployed and had chosen to vote for new candidates not from the country’s traditional parties.

Voting closed on Sunday evening in a parliamentary election that was the first since Lebanon’s economy began to spiral in late 2019, leading hundreds of thousands to protest in the streets against the country’s rulers.

Interior Minister Bassam Mawlawi said in a news conference that voter turnout was 41 percent, and with just a few polling stations still unaccounted for no major changes were expected. The turnout figure is lower than the 49 percent seen in 2018.

“I don’t know if it’s because of citizens’ choice or if it’s to serve the political orientation of those who called for boycotts,” Mawlawi said of the lower turnout on Lebanese television earlier on Sunday.

Vote counting is expected to be “a little complicated”, and could take time, he added.

For those who participated in the 2019 protests, new elections were seen as an opportunity to uproot Lebanon’s political establishment and throw out corrupt sectarian parties and cronies.

Voters, however, were managing their expectations earlier on Sunday.

Suleima Abu Merhi said she was less optimistic about what the election might achieve, but she still chose to vote.

“We hope the people we vote for won’t forget their morals if they are elected,” she said.

“I myself am not hopeful, but it is our civic duty to go out and vote.”

Some 3.9 million eligible voters had an opportunity to select their preferred representatives among 718 candidates spread across 103 lists in 15 districts and 27 subdistricts – an increase from 597 candidates and 77 lists in the 2018 election.

President Michel Aoun in a speech on Saturday called on citizens to vote in large numbers.

“The revolution of the ballot box is the most honest one,” Aoun said.

‘Rifle pointed at our backs’

Lebanon’s largest Sunni party, the once Saudi-backed Future Movement, did not participate in the elections.

Hariri left a significant political gap in key constituencies, and analysts told Al Jazeera that Hezbollah’s allies may try and capitalise on his absence.

The Future Movement currently has two-thirds of the allocated Sunni seats in parliament, and a wide array of political groups and candidates swept Sunni constituencies to try to fill the void in Tripoli, Sidon, and Beirut’s second district.

Many Hariri supporters had called for a boycott of the election, and in the Beirut neighbourhood of Tarik Jdide – where portraits of Hariri still hang from buildings –  residents in Hay Berjaoui blocked a main road with an inflatable swimming pool and a swing set.

Residents said they did not vote because the Future Movement was not running.

“Take a look around; today is just an ordinary day for us,” he said.

Abdelaziz dismissed fears of Hezbollah taking advantage of the political gap Hariri left after stepping down, saying the Iran-backed party had always run things in Lebanon using its armed forces as leverage.

“There has always been an obstacle called Hezbollah,” he said.

“Let’s not kid ourselves anymore; there has always been a rifle pointed at our backs.”

The European Union deployed 170 observers all over the country to monitor procedures on Sunday.

Elections monitors from the NGO the Lebanese Association for Democratic Elections told Al Jazeera that Hezbollah and Amal partisans in several southern and eastern towns threatened them and kicked them out of polling stations. One monitor was attacked.

In the eastern town of Zahle, and southern town of Kfar Melki, altercations broke out between Hezbollah and Amal members and Christian Lebanese forces. Several were injured, according to eyewitnesses.

Voter participation was expected to be higher this year following an increase in the Lebanese diaspora voting last week.

This was more than triple the diaspora’s participation in Lebanon’s previous elections in 2018, when voter turnout was just short of 50 percent.

While analysts anticipate anti-establishment candidates will possibly win additional seats in this election, they say the balance of power will ultimately remain the same: Hezbollah and its allies will maintain their majority in parliament. 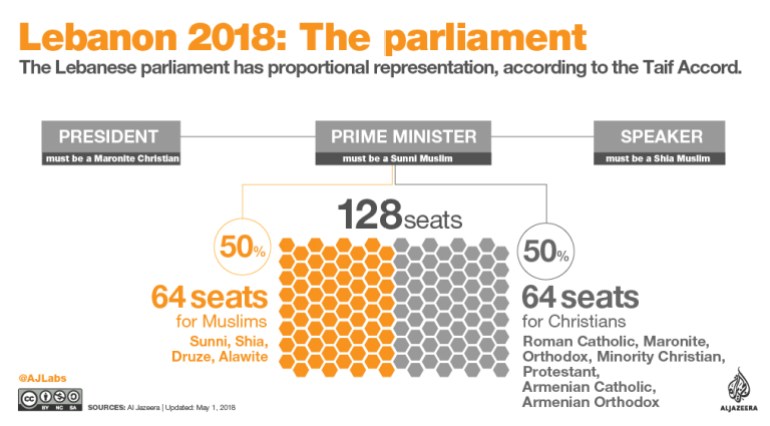