Gagauzia, Moldova – In Congaz, a small village in Moldova’s autonomous region of Gagauzia, a statue of the former Soviet leader Lenin watches over a reception centre for Ukrainian refugees.

“I learned only good things about Lenin: that he was an important leader, that he was a hard-working man like us. That’s why I don’t mind standing next to Lenin’s statue,” Margarita, who hails from Odesa and now lives on the village’s Lenin Street, told Al Jazeera.

Forty-three refugees live at the centre. Washing machines donated from Turkey sit near the entrance, where aid is also received and distributed. 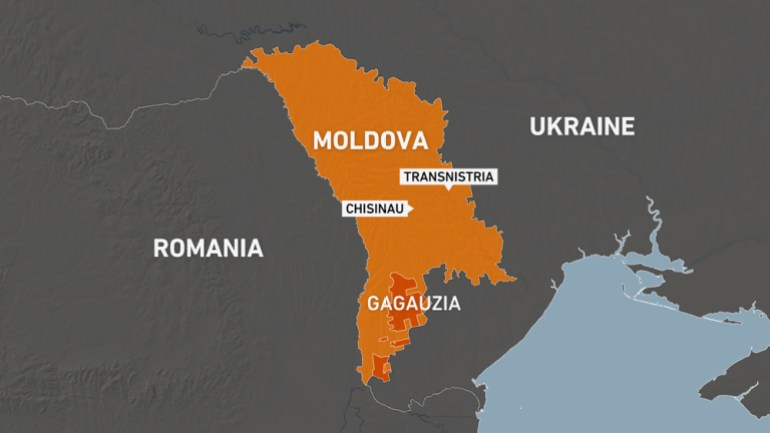 Margarita arrived with her nine-year-old son a few weeks ago, when she moved from Tiraspol, the self-declared capital of Moldova’s pro-Russia breakaway region, Transnistria, after explosions that appeared to relate to the Ukraine war rang out.

At that time, Russian officials said they were looking for easier access to Transnistria, where Moscow’s military has a presence already, in order to capture more of Ukraine.

“We would only go further if something happened here in Gagauzia,” said Margarita, “but now we feel safe here, it’s quiet, like it used to be at home in Odesa. And it helps that everyone speaks Russian here.”

Gagauzia is Moldova’s poorest region, populated by a Russian-speaking Turkic minority that settled in Ottoman times. Now, the European Union, Russia and Turkey are competing for influence in the region.

And like everyone in Moldova, the Ukraine war has startled the people of Gagauzia – which is just 200km (124 miles) from Odesa.

The office of George Sari, deputy mayor of the Gagauzian capital, Comrat, is adorned with Turkish flags and the Turkish eye-shaped amulet.

As he speaks to Al Jazeera his phone rings.

Ankara has made considerable investments in Gagauzia’s infrastructure, hospitals and schools. According to Sari, Turkey has also donated significant sums of aid to host Ukrainian refugees here.

After World War I, Gagauzia became part of Romania, a period when many in this region were persecuted. Because of that, Gagauzians generally do not like Romanians, do not learn Romanian and do not agree with reunification.

In 1940, together with Moldova, Gagauzia was annexed by the Soviet Union following an ultimatum given to Romania by then Soviet-leader Joseph Stalin.

Much like the breakaway region of Transnistria, Gagauzia declared independence in 1990 – when the Soviet Union dissolved.

It reintegrated into Moldova in 1994 and has since been an autonomous region. While it answers to Chisinau, it has its own police force, regional laws and unique economic ties to Russia, the EU and Turkey.

They are Orthodox Christians and primarily speak Russian, but also Gagauzian, a language that is closest to Turkish. Moldova’s national language is Romanian.

The Gagauzian language was not properly taught when the region was part of Romania, so the main goal of authorities and Turkey alike is to revive the local dialect and give it more prominence in overwhelmingly Russian-speaking schools.

The EU, meanwhile, has been investing in the region’s infrastructure through its development bank.

The region’s biggest challenge is its distrust in Chisinau, especially since the pro-European, democratic President Maia Sandu took office in 2020.

“The government in Chisinau is against our people. Because we don’t speak Romanian, they think we are Russian,” said Nikolai, a Comrat local.

Sandu applied for EU membership in March and Moldova has officially become a candidate state.

Accession could take years, but Gagauzians are already against the move.

Nikolai believes that if Moldova joins the EU, “Our people will run free in Europe.”

Anastasia, a 20-year-old preparing to go to university in Comrat, told Al Jazeera that if Moldova joins, there will be “chaos” in Gagauzia.

“We want to be autonomous; we don’t like their laws and the most important reason is that they allow various LGBT parades there,” she said.

Sandu’s government recently banned pro-war symbols associated with Russia’s invasion of Ukraine, such as the letters V and Z, but also a black and orange ribbon used in Soviet medals and on May 9, when former-Soviet countries celebrate the World War II victory.

Gagauzians are mostly pro-Russian and treasure the ribbon.

“A mistake on the part of the government was banning the ribbon,” said Sari, the deputy mayor.

Historically the region supports the socialist party led by former President Igor Dodon, who is known for warming ties with Moscow.

“Our region wanted to have good relations with Russia, to offer us cheaper gas and for our students to be able to study in Russia. Maia Sandu broke this link,” said Anastasia.

“When Dodon was in power, there was no such chaos, prices did not rise so suddenly. We had neutrality and we didn’t go against anyone but it seems that we are now going against [Russia] while we should maintain neutrality.”

Much of the resentment towards Romania, the EU and Chisinau could be down to how much Russian media Gagauzians consume.

In the lead-up to this year’s May 9 parade, Anastasia read reports about Romanian tanks stationed at the border with Moldova, preparing to enter during the parade. She got scared, but the reports ultimately turned out to be misinformation.

Meanwhile, Nikolai believes that news from Romania and Moldova is biased – in support of the West.

“They think we are zombies and can’t think. We are against the war obviously, but Moldovan media thinks we are not capable of analysing things by ourselves, and we are upset about that, it’s unpleasant,” Nikolai told Al Jazeera.

But some young Gagauzians see value in joining the EU.

“I think Moldova and Gagauzia should move towards the EU,” said 16-year-old Lili. “People have a bad opinion about Russia but a good opinion about the EU.”

Lili still likes the idea of Russia, where she will go to continue her education in two months.

When asked if she is afraid of the war in Ukraine, she said she’s “not worried at all”.

While Lili thinks of her future, Margarita is stuck on her past, dreaming of prewar Ukraine.

Even so, she does not have ill feelings towards those who sympathise with Russia.

“It doesn’t bother me in any way that people here are pro-Russian, because I choose peace and quiet in my soul. I don’t want war with others, that’s the important thing for me,” said Margarita.