Ademeta Esther Oluwafeyisayo has lost count of the number of university applications she has filled out since fleeing the war in Ukraine.

The 22-year-old Nigerian student found refuge in neighbouring Hungary on March 10, having escaped weeks of relentless shelling by Russian troops who had surrounded Sumy, the city in which she was studying medicine since 2021.

It had taken a year of tiresome double shifts for Oluwafeyisayo’s parents – a farmer and a food vendor respectively, in the southwestern Nigerian state of Ondo – to earn enough money to send their daughter to study abroad.

“I am my family’s hope,” she told Al Jazeera from Budapest.

But that hope is rapidly dissipating as Oluwafeyisayo struggles to find a scholarship before the temporary permit allowing her to stay in Hungary, expires in early June.

She is not an isolated case.

According to an estimate by several charities, about 10,000 African students, who were studying in Ukraine before Russia’s invasion on February 24, are now spread across Europe facing obstacles as they seek to fulfil their educational aspirations.

Entangled in the complexity of European countries’ migration laws, war-scarred students from third countries find themselves trapped in limbo. Tuition fees in the countries they fled to are too high and scholarships are mostly offered to Ukrainian students.

While a return home is not a viable option for many, they are also excluded from accessing rights under a new European Union scheme. They might have fled Russia’s invasion like their Ukrainian counterparts, but are seen as not native to a war-torn country. Without a strong support system, they have to rely on financially struggling charities for shelter, food and funds.

“European governments have been kind, but not kind enough to treat African students the same way Ukrainians have been treated,” said Enebechi Macaulay Ebuka, vice president of NIDO, an organisation based in Poland that has been assisting Africans fleeing Ukraine.

No hope at home

Thanks to its low university fees and cheap cost of living, Ukraine during the past 20 years became an increasingly attractive destination for students from developing countries, especially in medicine-related fields. More than 80,000 international students, including from Nigeria, Cameroon and Tanzania, were studying in the country in 2020, according to government figures.

After Russia invaded Ukraine and triggered the world’s fastest-growing refugee crisis, universities across Europe rushed to offer a flurry of scholarships and programmes to help students continue their studies.

However, charities, human rights groups and dozens of African students have said that most of these opportunities, aside few cases, are not available to non-Ukrainian nationals.

“Ukrainians are already in classes,” Ebuka said. As for the rest, “[They] are being told to go back home and apply [for European universities’ programmes].”

Home is not an option for Abduljaleel Bayero. The 22-year-old student was in his third year at Ternopil National Medical University, in western Ukraine before the war broke out.

He had left Nigeria’s capital Abuja in 2019 for Ukraine to become a surgeon and find “an environment where I would thrive”, he said from the Polish capital, Warsaw.

Back home there is no future for him, added Bayero, citing Nigeria’s dire economic situation and nationwide university strikes that regularly paralyse its educational system. The last one, which started in February, was extended on Monday for another three months.

Now, Bayero says he is waiting for the 15-day residency permit he received when entering Poland on February 26 to be extended. He has yet to find a university to accept his application as a transfer student.

His only available option so far was to drop medicine and start a university degree from scratch at a fee three times higher than what he paid in Ukraine –  $4,500, inclusive of accommodation – before the war.

Many students said they have struggled to find scholarships at more expensive universities.

“I have a lot of emotions at the moment,” Bayero said. “It’s a terrible experience for me. I am considering deferring my studies.”

Charities have struggled to secure funds for non-Ukrainian students, and have urged the EU and the UN to put forward a package of scholarships designed specifically to support them.

Access to university is not handled at the EU level, an official from the bloc said, noting that third nationals can always apply for asylum or a legal migration status. 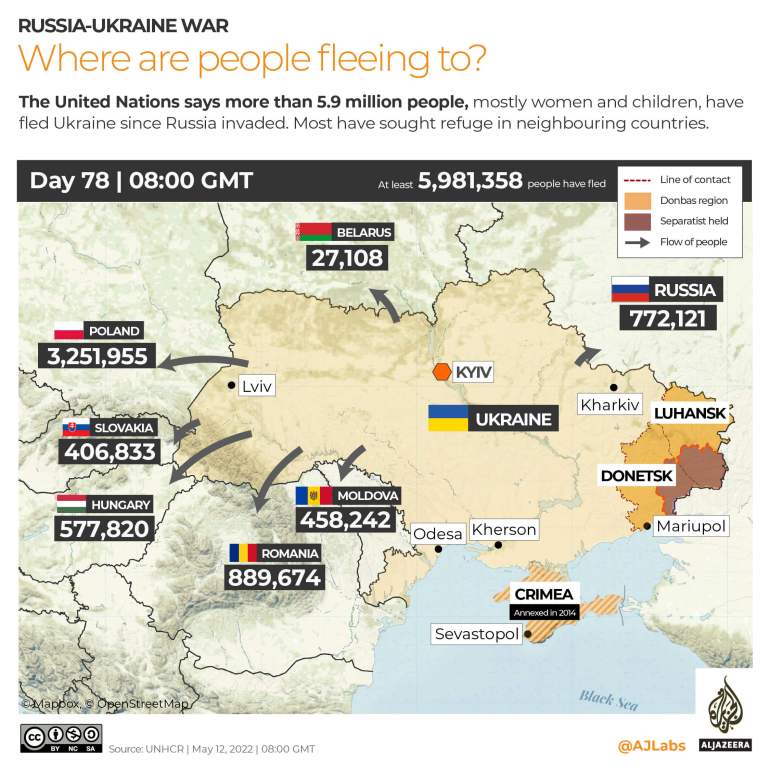 However, third-nation students have also faced a completely different immigration landscape than Ukrainian nationals, which has further complicated their efforts to find work, healthcare and housing.

To handle the mass influx of more than six million refugees who fled Ukraine, the European Union has granted “temporary protection status” to all Ukrainians and those who had a permanent residency in the country before the war began.

The measure, never adopted before by the EU, granted a residency permit for up to three years, and access to employment, housing and medical care.

But the scheme does not cover those who “can return safely” to their country of origin. For these people, each EU state applies its own rules, which in most cases is a residency permit for up to three months. These short-term stays do not guarantee the same rights covered by the temporary protection.

“There is a path to be absorbed in these different countries which is so easy for Ukrainians. For third nationals is just a different game,” said Funmi Adeleye-Oladejo, co-founder of Diaspora Relief, a volunteer platform helping African students. “Ukrainians are settling down, but Africans are still on the journey,” she added.

The lack of a legal permanent status has triggered a series of obstacles beyond their attempts to re-enrol in their studies. Landlords have refused to rent apartments, employers have not offered jobs and students have had to rely on charities or on themselves to secure basic needs, including getting medical treatment.

The medical student, Bayero, organised a daily virtual chat on Twitter for African students to share tips on how to navigate the complexity of European countries’ immigration policies, where to find the latest accessible scholarships or simply to check on each other.

But it has not been enough.

The level of uncertainty over the future, added to the trauma of war, along with the prospect of seeing years of sacrifice evaporating are hitting on some students’ mental health, said Kemi Babagbemi.

A Nigerian doctor based in New York, she has been providing support as an independent volunteer to African students stranded in Europe. After organising several initiatives, social media groups and becoming a point of reference to students, she realised the need for mental health assistance.

So Badagbemi assembled a team of pro bono mental health psychiatrists, psychologists and therapists to assist the students in coping with their stranded reality.

What worries her, she said, was what lay ahead for the students.

“Many of them are realising that they do not have a permanent status in the countries that they fled to and reality is starting to sink in,” she said.

“The biggest challenge is that they are being told to go home and going back is like saying to lay down in a coffin,” Babagbemi said. “These people are desperate to improve their life and they know they can get it through education,” she added.