The 11th week of the Russian invasion of Ukraine saw Kyiv’s forces mount a counteroffensive. Ukrainian troops have recaptured towns to the north and east of the country’s second city Kharkiv, in eastern Ukraine.

Hundreds of civilians were evacuated from the besieged Azovstal steel plant in the Russian-occupied port city of Mariupol, and the European Union struggled to agree on a sixth round of sanctions, as Hungary bristled at a potential oil embargo.

Here, Al Jazeera looks at the major events that marked the eleventh week of the war in Ukraine:

Ukrainian and Russian reports confirm that a Ukrainian counteroffensive north and east of Kharkiv has pushed Russian troops 40km back from the city, in the first major Ukrainian battlefield success since winning the battle for Kyiv. Russian forces launch several unsuccessful attacks in the eastern Donbas region.

In Mariupol, Russian troops reportedly attempted to storm the tunnels under the Azovstal plant, where some 2,000 Ukrainian fighters are holding out. Denys Prokopenko, a commander of the Azov Regiment inside the plant, says Ukrainians are fighting “difficult, bloody battles”. A top Ukrainian parliamentarian confirms that Russian troops are now inside the plant. The United Nations evacuates 344 civilians from Mariupol and surrounding villages to safety in Zaporizhzhia. Ukrainian President Volodymyr Zelenskyy makes an appeal to the UN to save an estimated 200 civilians still in the city’s Azovstal plant.

Russian forces conduct an unsuccessful ground offensive from Kherson towards Zaporizhzhia in the southwest.

The European Commission unveils a sixth round of sanctions, including “a complete import ban on all Russian oil, seaborne and pipeline, crude and refined” by the end of the year, Commission President Ursula von der Leyen tells the European Parliament.

Von der Leyen also calls for banning Russia’s largest bank, Sberbank, from the Swift interbank transaction system, along with Credit Bank of Moscow and the Russian Agricultural Bank. “This will solidify the complete isolation of the Russian financial sector from the global system,” she says. Von der Leyen also calls for a ban on three Russian state broadcasters: Rossiya RTR/RTR Planeta, Rossiya 24, and TV Centre International, and a ban on the sale of accounting, consulting and public relations services to Russia.

Ukrainian officials and military officers confirm that Russian forces have breached underground tunnels at the Azovstal plant in Mariupol.

A Reuters investigation reveals the identities of Russian units believed to have committed war crimes in Bucha. They include the 76th Guards Air Assault Division, an elite paratrooper unit under the personal command of defence minister Sergey Shoigu, and the Vityaz security force, commanded by former Putin bodyguard Viktor Zolotov. The investigation also reveals the identities of Ukrainian civilians allegedly tortured and killed by these units.

A US defence official reveals that the US gave Ukrainian forces intelligence on the whereabouts of the Russian Black Sea flagship Moskva before Ukraine targeted and sank it with two missiles.

Zelenskyy calls for the rescue of the last remaining civilians from the Azovstal plant in Mariupol. 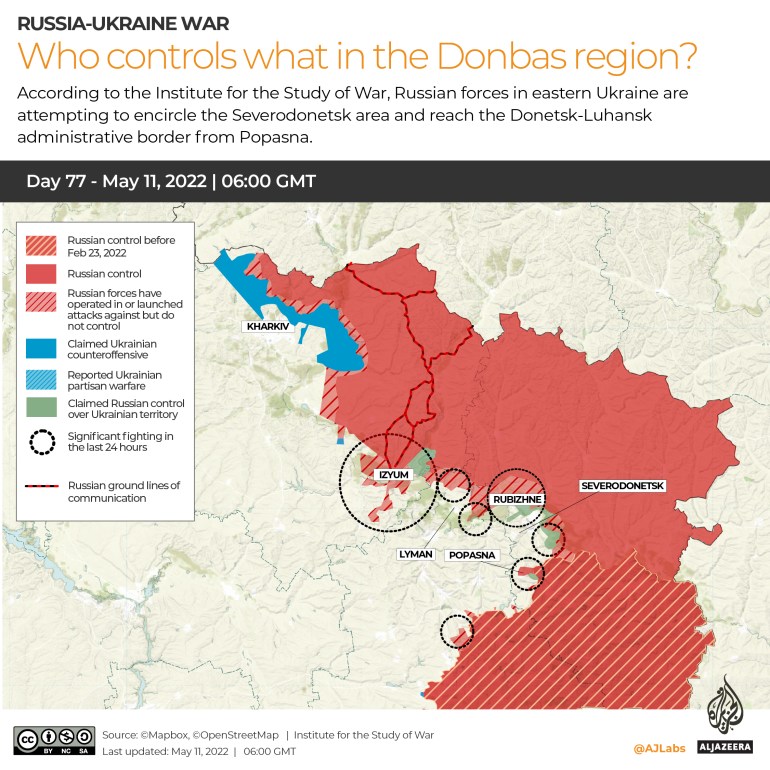 The Pentagon says most Russian forces have left Mariupol to fight in the Donbas region, leaving a garrison of about 2,000 troops – the same as the number of Ukrainians believed to be in the Azovstal plant.  The Red Cross and United Nations evacuate 50 civilians from the Azovstal plant in Mariupol to Zaporizhzhia.

Germany says it will send seven self-propelled howitzers to Ukraine, which had requested a dozen. The Netherlands had already committed to sending five.

The European Commission tweaks its 6th sanctions proposal, giving Hungary, Slovakia and the Czech Republic until the end of 2024 to wean themselves off Russian oil. The Commission also triples a transition period for EU-flagged ships to stop carrying Russian oil for three months. According to some reports, the measure could be scrapped altogether.

Zelenskyy for the first time outlines strict conditions on which he would enter peace talks with Russia, including a withdrawal of Russian forces to pre-February 24 borders, the return of five million refugees, membership in the European Union, and accountability for those Russians who committed war crimes.

The Ukrainian general staff says Russian forces destroy three bridges in their retreat from Kharkiv, at Circuna and Rusky Tyshky, 22km (14 miles) from Kharkiv city centre. The destruction of the bridges indicates that they are unlikely to attempt to retake the territory the Ukrainian counteroffensive is seizing around the city. Russia confirms the withdrawal.

The Russians are also bogged down near Izium, with Ukrainian forces preventing their branching out to take surrounding villages to the west and southwest. There is also no Russian attempt to break out southeast towards Sloviansk, a presumed Russian objective that would help surround Ukrainian forces.

Ukrainian officials confirm that Russian forces have occupied Popasna, an advanced position in Luhansk province, and a presumed jumping-off point to march on Sloviansk.

Mariupol municipal adviser Petro Andryuschenko says Russians are preparing to hold a May 9 parade in the city, and are offering residents food in return for clearing rubble and dead bodies. Deputy Prime Minister Irina Vereshchuk says all civilians have now been evacuated from the Azovstal plant in the city.

Russian forces amass in Belgorod, southern Russia, presumably to move against the Ukrainian counteroffensive around Kharkiv. On the eastern line of contact, Russians continue their offensives in an effort to take all of Luhansk and Donetsk oblasts. Sixty civilians are believed to have been killed by a Russian air raid on a school, where 90 were sheltering. In Izium, Russian forces have paused to regroup. Russian forces continue to attack the Azovstal plant in Mariupol.

In Mariupol, Russian forces continue to conduct artillery raids and assaults on the Azovstal plant, reportedly advancing into its northern side.

Russian President Vladimir Putin says in his Victory Day speech that his “special military operation” in Ukraine was necessary as a preemptive defence of Russia, because NATO and Ukraine were plotting to take aggressive action against his country.

“We saw military infrastructure being ramped up, hundreds of military advisers working and regular deliveries of modern weapons from NATO. [The level of] danger was increasing every day. Russia preventively rebuffed the aggressor. It was necessary, timely and … right. The decision of a sovereign, strong, independent country.”

Putin does not use the speech to order a general mobilisation or to ramp up his war aims.

French President Emmanuel Macron pours cold water on any notion of rapid EU membership for Ukraine, saying it will likely take “many decades”, in a speech to the European Parliament.  Instead, Macron says he supports creating a strengthened form of association with the EU that would enable Ukraine and other EU hopefuls like Moldova and Georgia to enjoy many aspects of membership quickly.

“It is our historic obligation … to create what I would describe before you today as a European political community,” he says. “This new European organisation would allow democratic European nations … to find a new space for political cooperation, security, cooperation in energy, transport, investment, infrastructure, the movement of people.”

The Ukrainian counteroffensive continues to push Russian forces east of Kharkiv city, liberating Bairak, Zamulivka, Verkhnii Saltiv, and Rubizhne (different to the Rubizhne in the Donbas) and reportedly coming within 10km (six miles) of the Russian border. Ukrainian authorities report that Russian forces are retreating to regroup defensively near the border.

“Ukrainians are getting close to the Russian border. So all the gains that the Russians made in the early days in the northeast of Ukraine are increasingly slipping away,” says Neil Melvin of the RUSI think-tank in London.

Russian forces continue assaults in the Donbas, but make no confirmed advances. Pro-Russian reporter Aleksandr Sladkov writes that Russian forces have good morale and are pressing the offensive, but cannot make progress because they are fighting at a 1:1 ratio with Ukrainian defenders, who are being replenished.

Russian forces continue aerial and artillery bombardment of the Azovstal plant. Ukrainian Deputy Prime Minister Iryna Vershchuk says there are 1,000 fighters left in the plant, half the estimate of previous days, without explanation. A hundred civilians are also estimated to be trapped inside. Ukrainian defence intelligence says Russian authorities are trying to round up kindergarten teachers in the Donetsk region to be sent to work in Mariupol. Mariupol municipal adviser Petro Andrushchenko says Russian occupiers are calling steelworkers to return to the Ilyich plant to resume production that will help the Russian armed forces.

At least one person is reported killed as Russian missiles hit a shopping centre in Odesa.

The US House of Representatives prepares to approve $39.8bn in additional funding for Ukraine, even more than the $33bn that President Joe Biden had asked for on April 28. The secretaries of state and defence say they will run out of the existing funding authority for Ukraine by May 19.

Ukraine defence intelligence says it has identified convoys of Russian trucks taking Ukrainian grain, sunflower seeds and vegetables towards the Crimea and the Russian border. Some shipments have reportedly been sent to Syria.