US House Speaker Nancy Pelosi led a Congressional delegation to Kyiv to meet Ukraine’s president in the latest show of support for the fight against Russia by a senior Western politician.

Pelosi, second in line to the presidency after the vice president, is the highest-ranking American leader to visit Ukraine since the start of the war, and her visit marks a major show of support for the country’s struggle against Moscow’s invasion.

“We believe that we are visiting you to say thank you for your fight for freedom… Our commitment is to be there for you until the fight is done,” Pelosi told President Volodymyr Zelenskyy, according to a video from the Ukrainian presidency.

“Our delegation travelled to Kyiv to send an unmistakable and resounding message to the entire world: America stands firmly with Ukraine. We are here until victory is won.”

Moscow calls its actions a “special military operation” to disarm Ukraine and rid it of anti-Russian nationalism fomented by the West. Ukraine and the West say Russia has launched an unprovoked war of aggression.

Zelenskyy took to Twitter to thank the United States “for helping protect the sovereignty and territorial integrity of our state”.

“The US is leading strong support for Ukraine in its fight against Russian aggression,” he said. “We’ll win and we’ll win together.”

The Congressional delegation included Adam Schiff, Jim McGovern, and Barbara Lee, among others. The visit was not previously announced.

The delegation continued its trip to southeast Poland and the capital, Warsaw, to meet President Andrzej Duda and other Polish officials.

Poland has received more than three million refugees from Ukraine since Russia launched its war on February 24.

In a news conference in Poland, Pelosi said she and others in the delegation applauded the courage of the Ukrainian people. 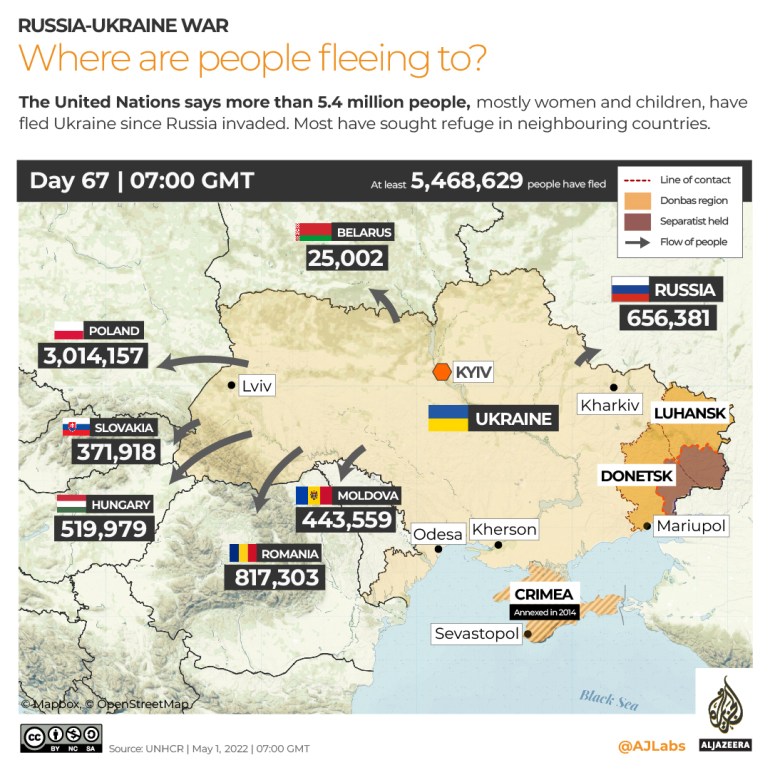 Schiff said the US legislators had a three-hour meeting with Zelenskyy and his administration, talking about sanctions, weapons and aid assistance. Schiff promised intelligence-sharing would continue between Ukraine and the United States.

“This is a struggle of freedom against tyranny,” Schiff said. “And in that struggle, Ukraine is on the front lines.”

McGovern said Russia’s war had repercussions far beyond Ukraine, saying it was exacerbating a food crisis that would be disastrous for poor people across the globe.

Russia’s Foreign Minister Sergey Lavrov urged the US and NATO to stop supplying Kyiv with arms if they are “really interested in resolving the Ukraine crisis”.

Russia has also slammed the West for imposing wide-ranging sanctions largely cutting off Russia’s financial sector from the global economy. Hundreds of multinational corporations have also exited Russia in the wake of the war in a blow to its economy.

European countries have pledged to cut reliance on Russian gas to deprive Moscow of revenue.