At least 50 people, including five children, have been killed and nearly 100 wounded in a rocket attack on a railway station in Kramatorsk in eastern Ukraine, according to Ukrainian officials.

In an online post updating an earlier preliminary death toll of 39 on Friday, Donetsk Governor Pavlo Kyrylenko said the 50 dead included victims who died of their wounds after being taken to hospitals.

Many of the injured were in serious condition, he said.

Ukrainian officials accused Russia for the attack, saying it took place as civilians were at the station in an attempt to evacuate to safer parts of the country. Russia, however, denied any involvement.

Oleksandr Kamyshin, head of the railway company, called it “a deliberate attack on the passenger infrastructure of the railway and the residents of Kramatorsk”. 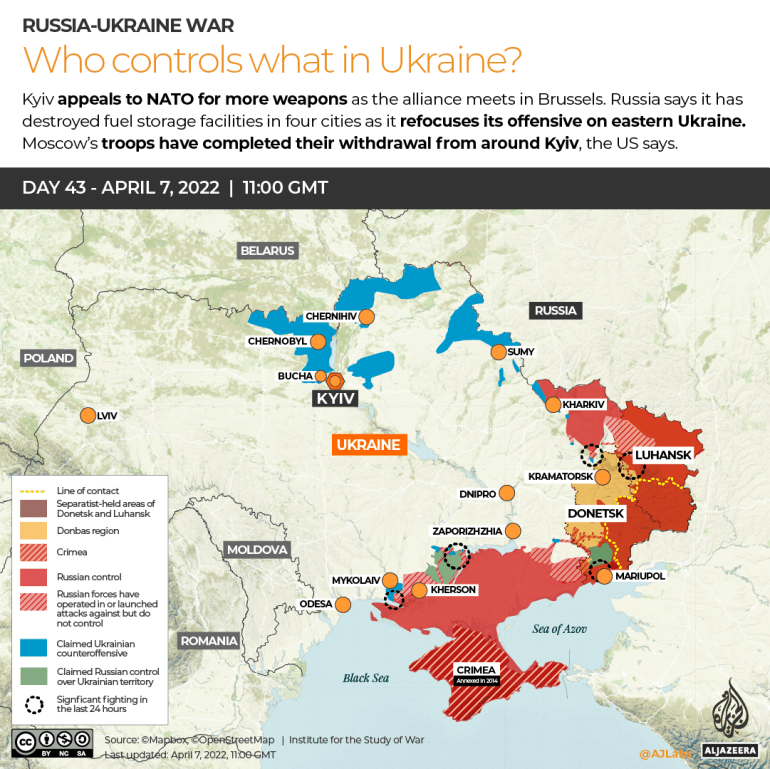 AFP news agency said its journalists at the scene saw at least 20 bodies of people grouped and lying under plastic sheets next to the station. Blood was pooling on the ground and packed bags were strewn outside the building in the immediate aftermath of the attack.

The journalists said four cars next to the station had been destroyed and the remains of a large rocket with the words “for our children” in Russian were lying adjacent to the main building. Bodies were later seen being loaded onto a military truck.

“This is how Russia came to protect the Donbas, how they view the protection of the Russian-speaking population. And this is the 44th day of our reality,” he added, referring to the time that has passed since Russia launched its invasion on February 24.

Earlier on Friday, Kyrylenko said thousands of people had been at the station at the time the rockets struck.

“The ‘Rashists’ [‘Russian fascists’] knew very well where they were aiming and what they wanted: They wanted to sow panic and fear, they wanted to take as many civilians as possible,” he said.

Kyrylenko published a photograph online showing several bodies on the ground beside piles of luggage. Armed police wearing flak jackets stood beside them. Another photo showed rescue services tackling what appeared to be a fire, with a pall of grey smoke rising into the air.

“All statements by representatives of the Kyiv nationalist regime about the ‘rocket attack’ allegedly carried out by Russia on April 8 at the railway station in the city of Kramatorsk are a provocation and are absolutely untrue,” the Russian defence ministry said in a statement on Friday.

“We emphasise that Tochka-U tactical missiles, fragments of which were found near the Kramatorsk railway station and published by eyewitnesses, are used only by the Ukrainian armed forces,” it added.

Kramatorsk was hit by Russian strikes earlier this week but had otherwise largely been spared the destruction witnessed by other east Ukraine cities since Russia’s invasion.

Three trains carrying evacuees were blocked in the same region of Ukraine on Thursday after an air raid on the line.

Ukrainian officials say Russian forces have been regrouping for a new offensive, and that Moscow plans to seize as much territory as it can in the eastern part of Ukraine known as Donbas bordering Russia.

Local authorities in some areas have been urging civilians to leave while it is still possible, and relatively safe, to do so.

One analyst said only Russia would have a reason to attack civilian railway infrastructure in the Donbas, and Ukraine would not deliberately kill its own civilians in “a war of survival”.

“The Ukrainian military is desperately trying to reinforce units in the area … and the railway stations in that area in Ukrainian-held territory are critical for movement of equipment and people,” said Justin Bronk, a research fellow at the Royal United Services Institute in London.

Elsewhere in the Donbas, the governor of Luhansk, Serhiy Haidai, said Russia was concentrating equipment and troops and increasing shelling and bombing to aid their advance.

“We sense the end of preparations for that massive breakthrough, for that great battle, which will happen here around us in the Luhansk and Donetsk regions,” he said in a televised address.