The United Nations General Assembly (UNGA) has voted to suspend Russia from the organisation’s leading human rights body amid allegations that its soldiers killed civilians while retreating from the region around Ukraine’s capital.

The United States-initiated resolution on Thursday achieved the two-thirds majority of UNGA voting members required to pass, with 93 votes cast in favour and 24 against. Fifty-eight countries abstained, but their votes did not count towards the final tally.

The vote, which makes Moscow the first permanent member of the UN Security Council to ever have its membership revoked from any United Nations body, was immediately welcomed by Kyiv but criticised by Moscow.

“War criminals have no place in UN bodies aimed at protecting human rights. Grateful to all member states which supported the relevant UNGA resolution and chose the right side of history,” Ukrainian Foreign Minister Dmytro Kuleba said on Twitter.

Russia’s rights of membership in the UN Human Rights Council has just been suspended. War criminals have no place in UN bodies aimed at protecting human rights. Grateful to all member states which supported the relevant UNGA resolution and chose the right side of history.

For his part, Kremlin spokesman Dmitry Peskov expressed regret about the decision. “We’re sorry about that,” Peskov said in an interview with Britain’s Sky News. “And we’ll continue to defend our interests using every possible legal means,” he said.

Russia had called on an unspecified number of countries to vote “no”, saying an abstention or not voting would be considered an unfriendly act and would affect bilateral relations.

In its so-called “non-paper” obtained by The Associated Press news agency, Russia said the attempt to expel it from the Human Rights Council is a political act by countries that want to preserve their dominant position and control over the world.

That was echoed by Gennady Kuzmin, Russia’s deputy ambassador to the UN, who told a special UNGA session on Ukraine before Thursday’s vote that the US-led resolution “has nothing to do with the human rights situation on the ground”.

“What we see is an attempt by the US to maintain its dominant position and total control, to continue its attempt at human rights colonialism,” Kuzmin said.

But Ukraine’s UN ambassador, Sergiy Kyslytsya, had urged UNGA members to “press the ‘yes’ button and to save the Human Rights Council and many lives around the world and in Ukraine”.

“On the other hand, pressing ‘no’ means pulling a trigger and means a red dot on the screen – red as the blood of the innocent lives lost,” he said.

US Ambassador Linda Thomas-Greenfield made the call for Russia to be stripped of its seat on the 47-member Human Rights Council earlier this week, following videos and photos of streets in the town of Bucha strewn with corpses of what appeared to be civilians.

“We believe that the members of the Russian forces committed war crimes in Ukraine, and we believe that Russia needs to be held accountable,” Thomas-Greenfield said on Monday. “We cannot let a member state that is subverting every principle we hold dear to continue to sit on the UN Human Rights Council.”

US Secretary of State Antony Blinken welcomed the UNGA vote on Thursday. “A country that’s perpetrating gross and systematic violations of human rights should not sit on a body whose job it is to protect those rights,” he told reporters.

The images emerging from the Kyiv region after Russia’s withdrawal have sparked global revulsion and calls for tougher sanctions.

Moscow has denied its troops were responsible for civilian deaths. Russia’s ambassador in Geneva, Gennady Gatilov, called the US action “unfounded and purely emotional bravado that looks good on camera – just how the US likes it”.

“Washington exploits the Ukrainian crisis for its own benefit in an attempt either to exclude or suspend Russia from international organisations,” Gatilov said, in comments relayed by a Russian diplomatic mission spokesman. 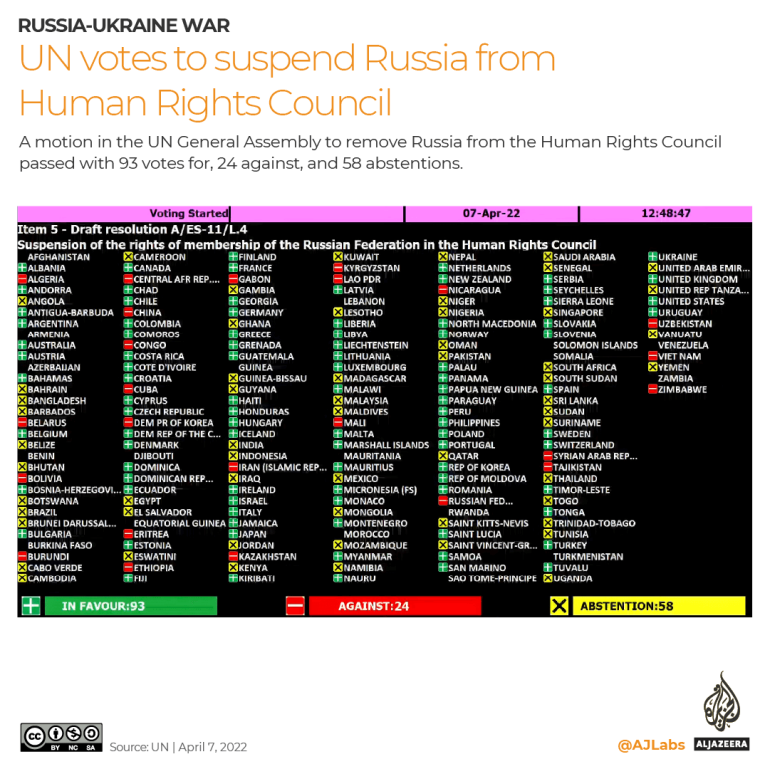 Al Jazeera’s Kristen Saloomey, reporting from UN headquarters in New York, said at least 57 countries had signed on as co-sponsors of the US-led resolution. But others had spoken out against it “on the grounds that it is singling out Russia before an investigation” into allegations of rights abuses in Ukraine.

Saloomey added that while the resolution ultimately “passed easily”, the 58 abstentions demonstrated that “clearly a lot of countries are uncomfortable with this”.

Meanwhile, China, Iran and Syria were among the 24 nations who voted against the resolution.

“Such a hasty move at the General Assembly, which forces countries to choose sides, will aggravate the division among member states, intensify the confrontation between the parties concerned – it is like adding fuel to the fire,” China’s UN ambassador, Zhang Jun, said before the vote.

Russia is a veto-wielding permanent member of the UN Security Council, alongside the United Kingdom, China, France, and the US. All currently have seats on the Human Rights Council, which the US rejoined this year.

While the council cannot make legally binding decisions, its decisions send important political messages and it can authorise investigations. Moscow has been one of its most vocal members and its suspension bars it from speaking and voting, officials say, although its diplomats could still attend debates.

The only other country to have its membership rights stripped at the Human Rights Council was Libya in 2011, when upheaval in the North African country brought down longtime leader Muammar Gaddafi.