Mariupol officials accused Russia of attempting to cover up the killing of possibly “tens of thousands of civilians” in the besieged city by using mobile crematoriums to burn bodies.

The southern port has been subjected to relentless bombardment since Russian troops surrounded it on March 2. Tens of thousands of residents who remain in Mariupol have been left with no access to water, food and medicine.

“One week ago, cautious estimates put the death toll at 5,000. But given the size of the city, catastrophic destruction, the duration of the blockade and fierce resistance, tens of thousands of civilians from Mariupol could have fallen victim to the occupiers,” Mayor Vadym Boychenko said in a post on Telegram on Wednesday.

“The killers are covering their tracks,” the council said in a series of social media posts. “Russia’s top leadership ordered the destruction of any evidence of crimes committed by its army in Mariupol.”

Boychenko said of the more than 5,000 civilians killed during weeks of Russian bombardment and street fighting, 210 were children. He said Russian forces bombed hospitals, including one where 50 people burned to death.

Boychenko said more than 90 percent of Mariupol’s infrastructure has been destroyed by the shelling. The Russian military has besieged the strategic port on the Sea of Azov, cutting food, water and fuel supplies and pulverizing homes and businesses.

Russia has denied its forces had carried out any atrocities and said earlier it would present “empirical evidence” to the UN Security Council meeting proving its troops were not involved. Moscow has said it is not targeting civilians in what it calls a “special military operation” to demilitarise Ukraine. 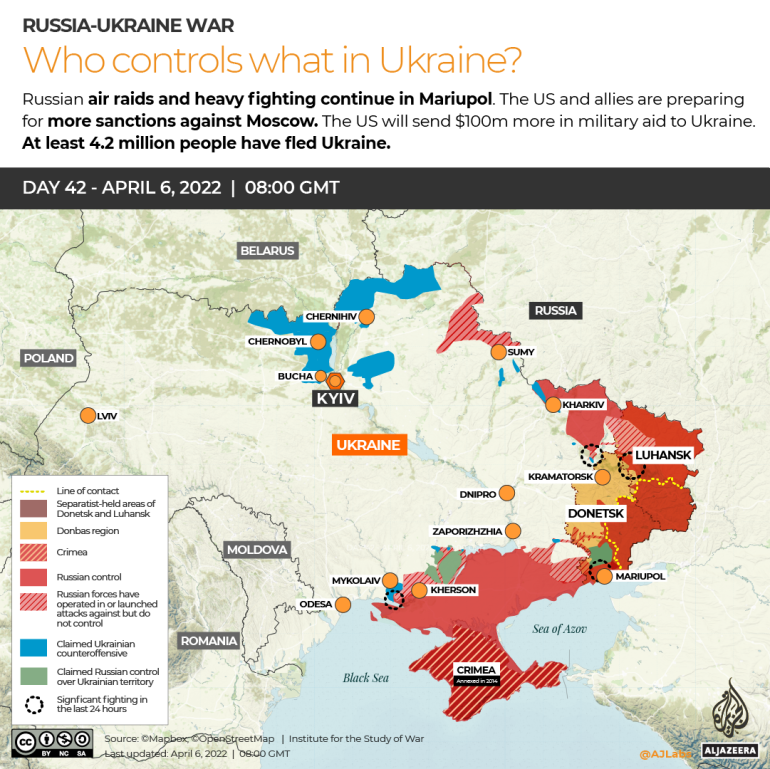 ‘A long road ahead’

At the weekend in the city of Bucha, several bodies apparently shot at close range were found, along with makeshift burials and a mass grave, but Al Jazeera could not independently verify the number of dead or who was responsible.

Satellite images taken in March by US company Maxar Technologies showed bodies of civilians on a street in Bucha, which was occupied by Russian forces until about March 30, undercutting claims by officials in Moscow that the scenes were staged.

However, Russian President Vladimir Putin on Wednesday accused Ukrainian authorities of being behind “crude and cynical” provocations in Bucha.

The Russian defence ministry claimed Ukrainian authorities were preparing “similar provocations” in the towns of Konotop and Trostyanets in northeastern Ukraine and the towns of Borodyanka and Katyuzhanka near the Ukrainian capital Kyiv.

“Yes, I accuse Western media, first and foremost the American outlets, of not only spreading fakes and misinformation but also of complicity in this punitive action to kill civilians in Bucha,” she told reporters.

Meanwhile, Ukrainian authorities searched for bodies and gathered evidence of Russian atrocities on the ruined outskirts of Kyiv, as the two sides geared up for what could be a climactic push by Moscow’s forces to seize Ukraine’s industrial east.

In the scarred and silent streets of towns around Ukraine’s capital that Russian recently troops left, investigators sought to document what appeared to be widespread killings of civilians, some apparently shot at close range, others with their hands bound or their flesh burned. Specialists also cleared mines from the areas.

In Andriivka, a village about 60km (40 miles) west of Kyiv, residents said the Russians arrived in early March and took locals’ phones. Some residents were detained and then released; others met unknown fates. Some described sheltering for weeks in musty, cramped cellars normally used for storing vegetables for winter.

With the sixth week of the war drawing to a close, the soldiers were gone, and Russian armoured personnel carriers, a tank and other vehicles sat destroyed on both ends of the road running through the village. Several buildings were reduced to mounds of bricks and corrugated metal. Residents struggled without heat, electricity or cooking gas.

“First we were scared, now we are hysterical,” said Valentyna Klymenko, 64. She said she, her husband and two neighbours weathered the siege by sleeping on stacks of potatoes covered with a mattress and blankets. “We didn’t cry at first. Now we are crying.”

To the north of the village, in the town of Borodyanka, rescue workers combed through the rubble of apartment blocks, looking for bodies. Mine-disposal units worked nearby.

Thwarted in their efforts to take the capital and forced to withdraw, Putin’s forces are now pouring into the Donbas, Ukraine’s eastern industrial eastern heartland, where the Ukraine military has said is it bracing for a new offensive.

Ukrainian forces have been fighting Russia-backed rebels in Luhansk and the other Donbas region Donetsk since 2014. In advance of its February 24 invasion, Moscow recognised the regions as independent states.