Concerns have been raised about a European Union-funded migrant detention centre near Ukraine’s Lutsk city which appears to continue to hold an unconfirmed number of migrants despite Russia’s full-scale invasion of the country.

Located in a pine forest in northwest Ukraine near the Belarusian border, the Volyn region’s Zhuravychi Migrant Accommodation Centre is a former army barracks constructed in 1961 that was converted into a migrant detention centre in 2007 with EU funds.

In a joint investigation with Lighthouse Reports, a non-profit organisation based in the Netherlands, Al Jazeera spoke to contacts and relatives of detainees who had been recently released, as well as analysed photos and documents, which verified the detainees’ presence in Ukraine before being placed in the centre.

The research shows that weeks into the Russian invasion, there were still people from countries such as Afghanistan and Pakistan detained in this centre.

Several people were recently released with the support of their embassies, but a source confirmed there were still people who remained there.

The European Commission did not answer questions from Al Jazeera regarding its operation and whether there were plans to help evacuate any remaining people. Ukrainian authorities also did not respond to a request for comment.

The wife of one detainee who was released last week said there was no air raid shelter for detainees and that guards ran down the street when the siren sounded.

One staff member of an NGO said she had been in contact with several detainees in recent weeks. Al Jazeera has seen their ID documents and, in some instances, visas used to enter Ukraine.

The detainees she spoke to said there were other prisoners from Sudan, Pakistan and Bangladesh present. Some of those detained had been apprehended in the months previous to the Russian invasion while trying to cross into EU territory, they said, and were handed back to Ukrainian authorities. 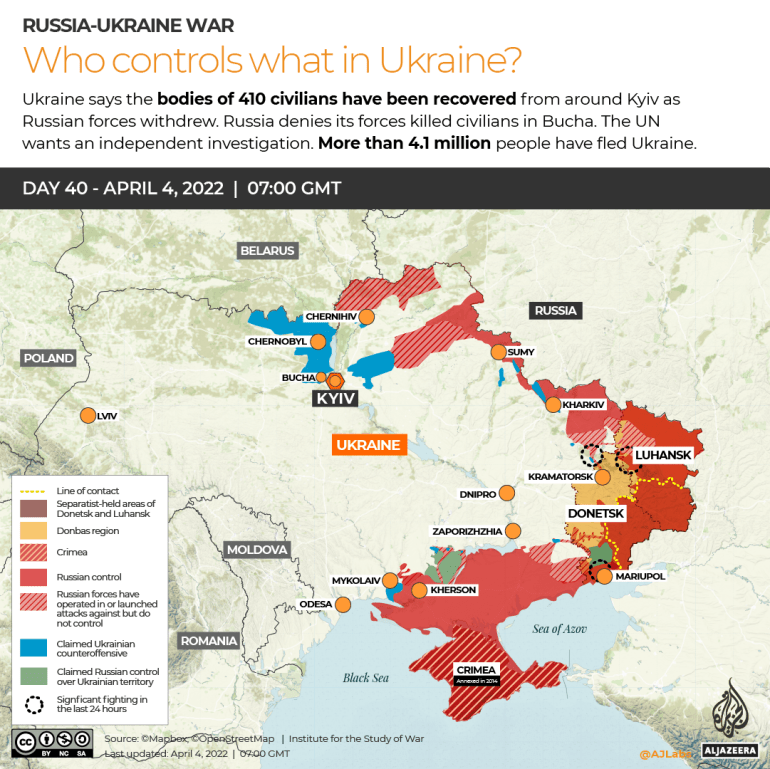 Niamh Ní Bhriain, war and pacification programme coordinator at the Transnational Institute, told Al Jazeera that the centre had been part of EU’s outsourcing of migration detention and that it had allocated 1.7 million euros ($1.8m) for the securitisation of this centre in 2009.

This included the construction of the perimeter security system, a tourniquet system, an electronic door locking system, and security window tapes and bars.

Ní Bhriain said “tens of millions of euros” of EU funds had been made available to Ukraine to “contain migrants outside its borders in detention facilities”.

In the past few years, about 150 people have been held there. Up until recent weeks, about 45 people were detained there, but Al Jazeera could not verify the current number who remain.

Some detainees have been released since the Russian invasion, including several Ethiopian citizens and an Afghan family, but fears remain for those left and there are now calls for the EU to help facilitate their safe passage to the EU.

“It is extremely concerning that migrants and refugees are still locked up in detention centres in war zones, with the risk of being attacked without any possibility to flee,” said Tineke Strik, a member of the European Parliament (MEP) from the Greens/EFA Group.

“I urgently call upon the European Commission to press the Ukrainian authorities to immediately release them and facilitate their safe passage to the EU territory.”

Nadia Hardman, a refugee and migrant rights researcher from Human Rights Watch (HRW), said they had spoken to people inside who were scared for their safety.

“There is simply no reason to continue the detention of migrants and asylum seekers – in a war zone. We call on Ukraine to immediately release these civilians, help them get to Poland to seek refuge and claim asylum if they want to,” she said.

“Human Rights Watch interviewed people detained at Zhuravychi and they’re absolutely terrified. They can hear the sounds of artillery fire and explosions, and have no idea why they’re continued to be locked up,” Hardman said.

HRW spoke to four people detained in the centre in early March who said people had protested against their detention on or shortly after the date of the Russian invasion and asked to be allowed to travel to Poland.

In a report released on Monday, HRW called for the release of immigration detainees still remaining in a war zone.

“There is so much suffering in Ukraine right now and so many civilians who still need to reach safety and refuge,” Hardman said. “Efforts to help people flee Ukraine should include foreigners locked up in immigration detention centres.”

Global Detention Monitoring Project, which has been raising awareness of the situation at the centre on social media, said it first became aware of the situation when it began to receive emails from people who said they knew detainees inside the centre in Volyn.

They added that due to large-scale disinformation campaigns to discredit Ukrainian authorities, it was important to verify as much information as possible.

“We then reached out to our networks of contacts in the international community and gradually built up a picture of what was happening and started drawing attention to a situation that was – and apparently remains – in clear need of urgent attention,” said Michael Flynn from the Global Detention Project (GDP).

Flynn said anyone remaining in the centre should be released and helped to safety.

“The GDP has consistently raised concerns with relevant authorities and international organisations that there is no justification for keeping migrants and refugees in administrative detention in situations of active warfare. All immigration detainees in Ukraine should be immediately released and assisted to find safety or leave the country, and helped to contact their embassies or consulates, should they wish to,” he said.

Ní Bhriain said it was crucial the EU took responsibility for detainees inside given its role in funding it.

“The EU drove the policies and funded the infrastructure which sees up to 45 people being detained today inside this facility in Ukraine and therefore it must call on Ukraine to immediately release those being held and guarantee them the same protection inside the EU as others fleeing the same war.”