Mayor Vitali Klitschko said on Friday a missile attack on his city Kyiv was Russian President Vladimir Putin’s way of giving “his middle finger” to UN Secretary-General Antonio Guterres and the West over the war in Ukraine.

The targeting of the capital on Thursday killed at least one person and wounded 10 others, and was the first on Kyiv since Russia refocused its efforts on the Donbas region in eastern Ukraine. Guterres and his team were not hurt.

The attacks were the boldest Russian attack on the capital since Moscow’s forces retreated weeks ago following their failure to take the city. Russia is now pushing into the Donbas, the country’s eastern industrial region, which the Kremlin has said is its main objective.

Volodymyr Fesenko, a Ukrainian political analyst and head of the Kyiv-based Penta Center think-tank, said the missile attacks carried a message: “Russia is sending a clear signal about its intention to continue the war despite the international pressure.”

He said Putin will continue to attack targets throughout Ukraine.

“With this missile strike, the Kremlin is sending a warning to all international structures and organisations trying to influence or contain Russia’s aggressive military plans,” Fesenko said. “While Russia has so far failed to score any significant gains in Ukraine, it intends to continue its offensive and keep striking cities with missiles.” 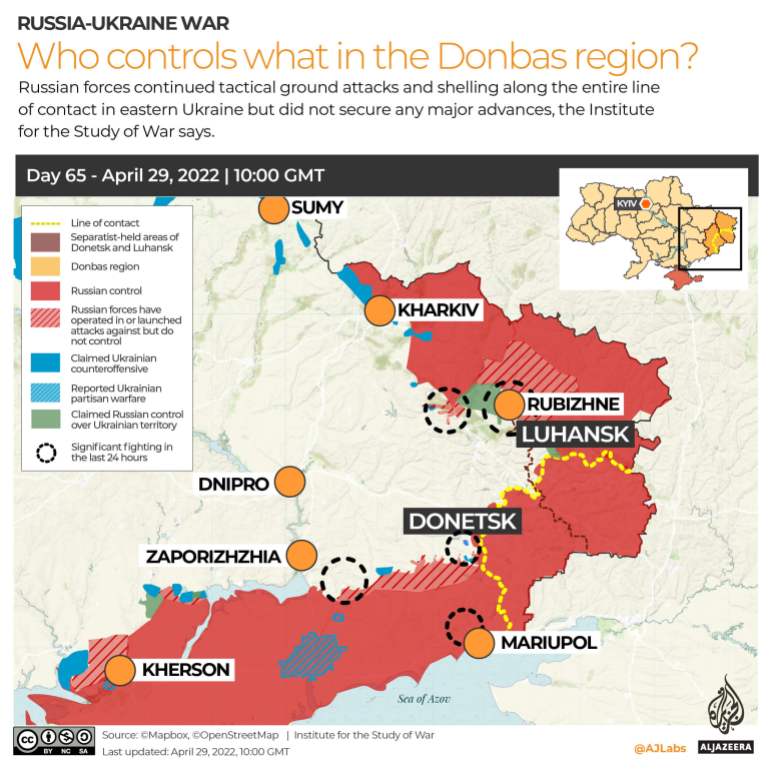 ‘Disrespect for the people of Kyiv’

In an apparent reference to the attack on Kyiv, Russia’s military said it destroyed “production buildings” at the Artem defence factory in a “high precision” missile attack.

The bombardment came barely an hour after Ukraine President Volodymyr Zelenskyy held a news conference with Guterres, who toured some of the destruction in and around Kyiv and condemned attacks on civilians.

“This says a lot about Russia’s true attitude toward global institutions, about attempts of the Russian leadership to humiliate the UN and everything the organisation represents,” Zelenskyy said.

Asked about the Ukraine president’s comments, deputy spokesman for the UN chief, Farhan Haq, said Guterres took Russia’s assault “really as a sign not of disrespect for him … but for the people of Kyiv”.

“Antonio Guterres doesn’t see this attack as about him. He sees this as another sign that there are parties who are wanting to continue this war, and we want to keep our push to make sure that the conflict can be ended,” Haq said.

In the wake of Thursday’s missile attack in Kyiv, Radio Free Europe/Radio Liberty said the body of Vira Hyrych, a journalist who lived in one of the buildings, was found in the rubble. Ten people were wounded, at least one who lost a leg, according to emergency officials.

Radio Free Europe President Jamie Fly said the organisation was “shocked and angered by the senseless nature of her death at home in a country and city she loved”.

‘Russians aren’t afraid of anything’

Kyiv had been relatively unscathed in recent weeks, and cafés and other businesses started to reopen. But Thursday’s attack shattered weeks of relative calm in the capital.

Russia has faced harsh criticism for its heavy bombing that has struck civilian areas, but also for accusations its soldiers on the ground have killed or harmed civilians. Moscow insists it is doing all it can to protect non-combatants.

Thursday’s blasts shattered windows and cracked walls for hundreds of metres in every direction, and significantly damaged a local health clinic.

“I think the Russians aren’t afraid of anything, not even the world’s judgement,” said Anna Hromovych, deputy director of the clinic, as she and others cleaned up the damage on Friday.