UN Secretary-General Antonio Guterres has called for Moscow and Kyiv to work together to set up aid and evacuation corridors in war-torn Ukraine.

“We urgently need humanitarian corridors that are truly safe and effective,” he told a press conference in Moscow on Tuesday after talks with Russian Foreign Minister Sergey Lavrov.

“To that end, I have proposed the establishment of a humanitarian contact group bringing together the Russian Federation, Ukraine and the United Nations to look for opportunities for the opening of safe corridors,” he said.

Guterres told Lavrov that he was ready to fully mobilise the organisation’s resources to save lives and evacuate people from the besieged Ukrainian city of Mariupol.

“Thousands of civilians are in dire need of lifesaving humanitarian assistance, and many have evacuated,” Guterres said at the news conference.

“The United Nations is ready to fully mobilise its human and logistical resources to help save lives in Mariupol,” he said, proposing coordinated work with the Red Cross to allow those citizens holed up with the city’s last defenders inside Mariupol’s Azovstal steel plant to leave.

“One thing [Guterres] emphasised was that, in the humanitarian corridors that they want to see established there, they would have to ensure that those civilians leaving Mariupol would be allowed to go in any direction that they choose,” Jabbari said.

“This is important because we have heard in the past accusations from Ukrainian officials saying that the Russians are allowing civilians to leave these areas in Mariupol but only to enter into Russian territory … [an allegation] Russian officials have dismissed so far.” 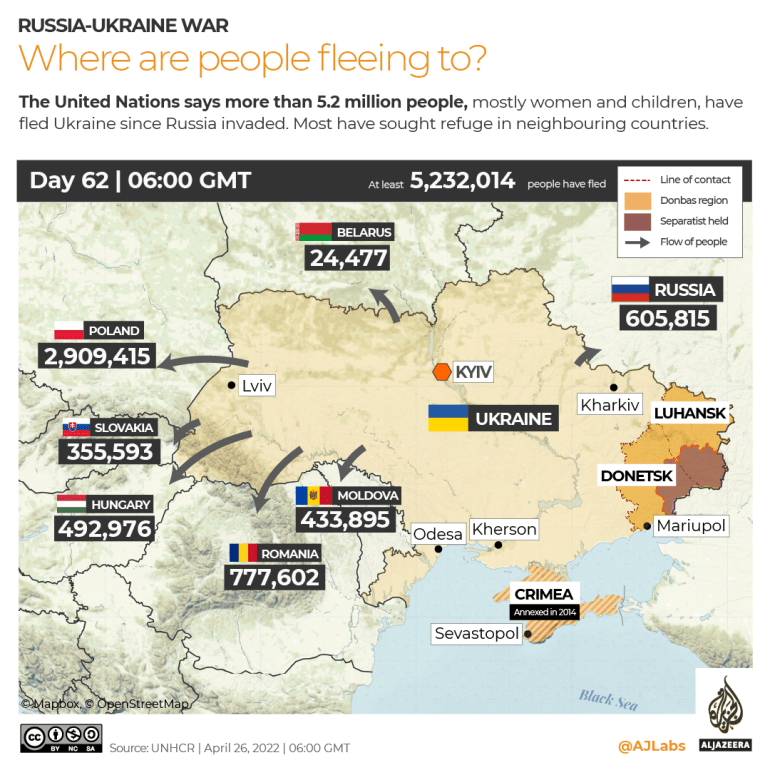 Lavrov said Moscow was ready to cooperate with the UN to help civilians in Ukraine.

He said Russia was in favour of resolving the conflict in Ukraine with peace talks, but said it was “depressing” the way the Kyiv delegation and Ukraine’s President Volodymyr Zelenskyy behaved.

Speaking at a news conference in Moscow, Lavrov said that if the Ukrainian delegation continues the current line of ignoring Russia’s proposals, the peace talks will not succeed.

“We are for a negotiated solution. But the way the Ukrainian delegation behaved at the talks, the way President Zelenskyy behaved, refusing to confirm that they received our new proposals a week ago, is depressing. Apparently, they are not particularly interested in negotiations,” he said.

“If this will continue, the talks will hardly have any result, but I repeat that we adhere to a negotiated solution, adhere to a ceasefire,” he said.

For his part, Guterres also called for an independent investigation into “possible war crimes” in Ukraine.

“I am concerned about the repeated reports of violations of international humanitarian and human rights law and possible war crimes. And they require independent investigation for effective accountability,” Guterres said.

He is set to meet with Russian President Vladimir Putin later on Tuesday.