The incidents on Tuesday came after local officials reported several explosions at the state security ministry in the city of Tiraspol at 6pm (15:00 GMT) the day before, on a public holiday for the Orthodox Easter.

Moldovan authorities are sensitive to any sign of growing tensions in Transnistria, an unrecognised Moscow-backed sliver of land bordering southwestern Ukraine, especially since Russia invaded Ukraine on February 24.

Russia has had troops permanently based in the region since the collapse of the Soviet Union in the early 1990s. Ukraine fears Transnistria could be used as a launchpad for new attacks on its soil.

“We urge citizens to keep calm and feel safe,” Moldovan President Maia Sandu said after a meeting of the national security council.

Sandu said this was “an attempt to escalate tensions,” and blamed “internal differences between various groups in Transnistria that have an interest in destabilising the situation”.

She recommended stepped up patrols and vehicle checks near a buffer zone with Transnistria, tighter public safety measures, and security checks on critical infrastructure.

‘Terrorist act on our territory’

Transnistrian leader Vadim Krasnoselsky  suggested Ukraine was to blame and asked Kyiv to investigate the “illegal movement of … fighters on Transnistria’s territory and their committing a terrorist act on our territory”.

The conflict in Ukraine has sparked fears in Moldova that it could become Russia’s next target.

The Kremlin expressed “concern” over the explosions. Russian state news agency RIA Novosti quoted a source in the Transnistria government as saying attackers had entered from Ukraine.

“We are observing closely and the news prompts concern,” Kremlin spokesman Dmitry Peskov said, while declining comment on who was behind the attacks.

The Organization for Security and Cooperation in Europe (OSCE), the world’s largest security body, condemned “all attempts to destabilise [the] situation” in Transnistria and its buffer zone. 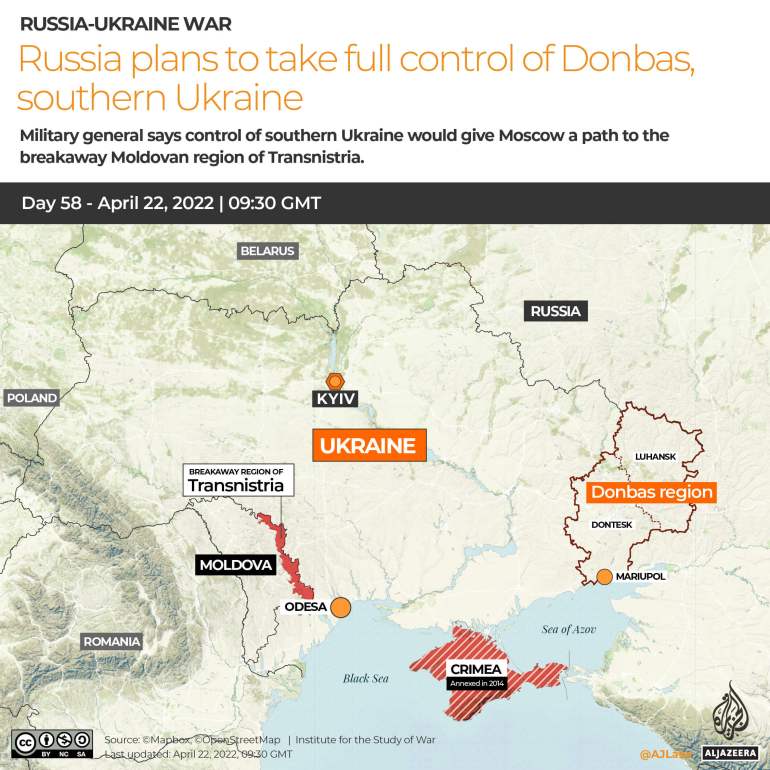 Earlier Tuesday, Transnistria’s interior ministry said “two explosions occurred in the village of Maiac, Grigoriopol district: the first at 6:40 and the second at 7:05”.

No residents were hurt but two radio antennae that broadcast Russian radio were knocked out, it added. There were no reported injuries from Monday’s incident at the ministry, either.

In a statement on Facebook, Transnistria’s interior ministry said some of the building’s windows were broken and that “smoke is billowing out of” the structure.

No one has claimed responsibility for either incident.

Transnistria, a strip of land with about 470,000 people, has been under the control of separatist authorities since a 1992 war with Moldova. Russia bases about 1,500 soldiers there, calling them peacekeepers, but concerns are high that those forces could be used to invade Ukraine from the west.

On Monday, Moldova’s foreign ministry said the Tirapol blasts were aimed at creating “pretexts for straining the security situation in the Transnistrian region, which is not controlled by the constitutional authorities”.

This attack comes after a senior Russian military official last week raised the issue of Russian speakers in Transnistria in the context of Russia’s military operation in Ukraine.

Major-General Rustam Minnekaev, acting commander of the central military district, said on Friday that Russia’s military action in Ukraine included a plan to take full control of southern Ukraine, which could provide access to Transnistria, “where there have been cases of oppression of the Russian-speaking population”.

The comments echoed one of Moscow’s justifications for the war in Ukraine.

Moldova summoned Russia’s ambassador over Minnekaev’s comments, which it called “unfounded and contradicting Russia’s position in support of the sovereignty and territorial integrity of our country within internationally recognised borders”.

The United States has previously warned Russian forces could launch “false-flag” operations to create a pretext for invading the territory of other nations.

Russian officials have rejected such charges.