Ukraine has urged Russia to hold a “special round of talks” on evacuating fighters and civilians holding out in a vast steel plant in the shattered port city of Mariupol.

The call from an adviser to Ukraine’s President Volodymyr Zelenskyy on Sunday came as new footage of people purportedly sheltering at the Azovstal steel plant showed women saying they only had water and food to last a few more days.

The steelworks is the last remaining pocket of resistance in southern Mariupol, and hundreds of Ukrainian fighters and some 1,000 civilians are estimated to be hiding in underground tunnels there.

Oleksiy Arestovych said Mariupol’s defences were “on the brink of collapse” and appealed to the Russians to hold talks at Azovstal.

“We invited Russians to hold a special round of talks on the spot, right next to the walls of Azovstal,”  Arestovych said in an interview on a Russian former lawyer’s YouTube channel.

He later said on the Telegram messaging app that Ukraine is proposing to establish humanitarian corridors and the exchange of Russian war prisoners for the fighters still in the plant.

There was no immediate response from Russia.

Its president, Vladimir Putin, had ordered his forces not to assault the plant, but Ukrainians say the attacks continue unabated.

Mykhailo Podolyak, another presidential adviser, tweeted on Sunday that the Russian military was attacking the plant with heavy bombs and artillery while accumulating forces and equipment for a direct assault.

(1/2) Orthodox Easter 2022. But right now, RF is continuously attacking the Mariupol Azovstal. The place where our civilians & military are located is shelled with heavy air bombs & artillery. RF accumulates forces & equipment for the assault. Who gave the order "not to storm"?

Meanwhile, in a message posted on social media on Sunday, Sviatoslav Palamar – deputy commander of the far-right Azov Regiment, which is sheltering at the steel plant – said Russian forces continued to rain down fire on Azovstal.

“The enemy continues air strikes, artillery from the sea… enemy tanks continue to strike and infantry is trying to storm,” he said.

The Azov Battalion also released a new video that it said was filmed inside the bunkers on Sunday, which showed women saying their children cannot sleep due to constant shelling and that they have not seen the sun in months.

One toddler is seen wearing homemade diapers made of cellophane and people are seen hanging laundry on makeshift hangers.

“Please help us,” one woman in the video said through tears, appealing to world leaders. “We want to live in our city, in our country. We are tired of these bombings, constant air strikes on our land. How much longer will this continue?” 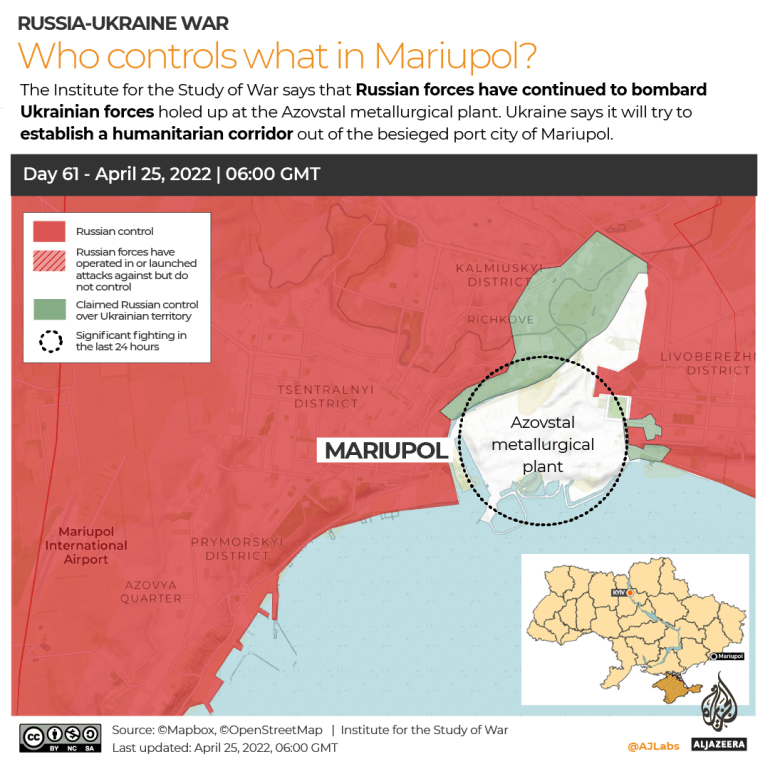 Mariupol, which the Kremlin claims to have “liberated”, is pivotal to Russia’s war plans to forge a land bridge to Russian-occupied Crimea – and possibly beyond, as far as Moldova.

Ukrainian authorities estimate more than 20,000 civilians have been killed. Recent satellite images showed what appeared to be mass graves to the west and east of Mariupol.

On Sunday, the United Nations’ Ukraine crisis coordinator Amin Awad called for an “immediate stop” to fighting in Mariupol to allow trapped civilians to leave.

“The lives of tens of thousands, including women, children and older people, are at stake in Mariupol,” Awad said in a statement.

“We need a pause in fighting right now to save lives.”