“I think we have to continue on this route. Always with the red line that we will not become parties to the conflict.”

Built by partly state-owned arms maker Nexter, the Caesar is a 155mm howitzer mounted on a six-wheeled truck chassis, capable of firing shells at ranges of more than 40km (25 miles).

Zelenskyy has also urged the West to impose tougher sanctions on Russia and accused the Russian army of committing many atrocities in Ukraine, including in the port city of Mariupol.

The move came a day after US President Joe Biden announced a new package of $800m in military aid for Ukraine, saying it would help Kyiv’s forces in the fight against Russian forces in the eastern Donbas region.

“This package includes heavy artillery weapons, dozens of howitzers, and 144,000 rounds of ammunition to go with those howitzers. It also includes more tactical drones,” Biden said on Thursday.

Although some countries such as the US have been quick to respond, others – notably EU heavyweight Germany – fear further antagonising Moscow by delivering more powerful arms for Ukraine.

“There is no textbook for this situation where you can look up at what point we will be seen as party to the conflict,” Chancellor Olaf Scholz told weekly Der Spiegel on Friday.

But he added Germany would replace Soviet-made weapons sent to Ukraine from eastern NATO and EU allies, including Slovenia, with new German-made ones.

“This is a debate that goes to the heart of Germany’s political life. It’s a sovereign choice that belongs to Germany and we respect it,” Macron was quoted as saying, adding he recently spoke to Scholz.

“We have the same strategy as the chancellor, which is to say that we will aid the Ukrainians as much as possible, but must be careful never to become parties to the conflict.”

Scholz on Friday hit back against accusations his centre-left Social Democrats have been too lenient towards Russia, as critics accuse Berlin of dragging its feet on deliveries of heavy weapons to Ukraine.

Opponents have confronted his Social Democratic Party (SPD) with a “distorted and slanderous depiction” of its Russia policy, Scholz said in an interview with German weekly Spiegel.

“That annoys me,” he said, adding the SPD was “bound into the Western and transatlantic alliance”.

Germany has come under fire for refusing to directly send heavy weapons to Ukraine, even as allies such as the US, Britain, Czech Republic, and the Netherlands up their deliveries.

Much of the criticism has been directed at Scholz, who has faced pressure even from his two junior coalition partners to take tougher action.

But the government has said after decades of chronic underinvestment, the German army, called the Bundeswehr, is simply not in a position to send the weapons Ukraine wants.

The potential to send arms to Ukraine from the stocks of the Bundeswehr had been “largely exhausted”, Scholz said in the interview.

Russia launched its all-out invasion of Ukraine on February 24 after a months-long standoff that saw Moscow amass troops near the Ukrainian borders as Russian President Vladimir Putin demanded an end to NATO expansion into former Soviet republics.

But in recent weeks, Moscow has scaled back its war objectives, shifting its military efforts to the eastern Donbas region after failing to capture the Ukrainian capital. 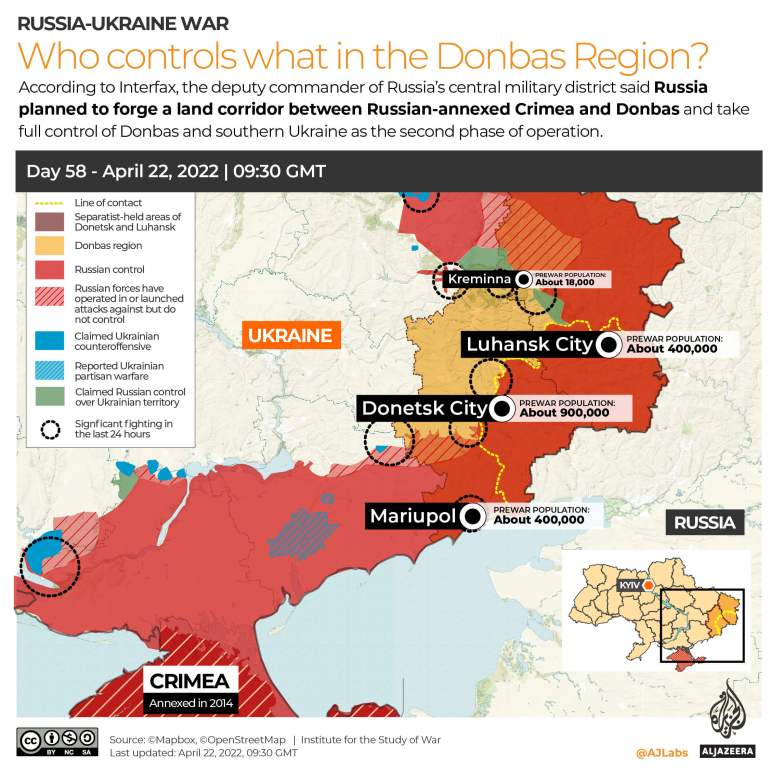