Students were among the casualties in the blasts at one school in Kabul’s Dasht-e-Barchi neighbourhood, police said on Tuesday.

The explosions occurred inside the Abdul Rahim Shaheed High School and near the Mumtaz Education Centre several kilometres away. There were no immediate reports of casualties at the education centre.

No group immediately claimed responsibility, however, the area has been targeted in the past by Afghanistan’s ISIL (ISIS) affiliate, which reviles Shia Muslims as heretics.

Tuesday’s explosions occurred as students were coming out of their morning classes at the school, which can house up to 1,000 students, witnesses said. It was not immediately clear how many children were in the school at the time of the blasts.

“We were leaving school and had just stepped out from the rear gate when the explosion occurred,” Ali Jan, a student wounded in the first blast, told the AFP news agency at a hospital in the area.

The second blast took place as rescuers arrived to ferry victims from the first explosion to hospitals.

“Some of our friends have lost hands, while some were covered in blood,” said Saeed Rahmatullah Haidari, a student at the school. “There were pieces of broken glass and pools of blood … My whole body was shaking.”

Outside a hospital treating the wounded, Taliban fighters beat back the families of students who gathered searching for information. Women cried out as they scanned through pictures of victims posted on nearby walls by medics. 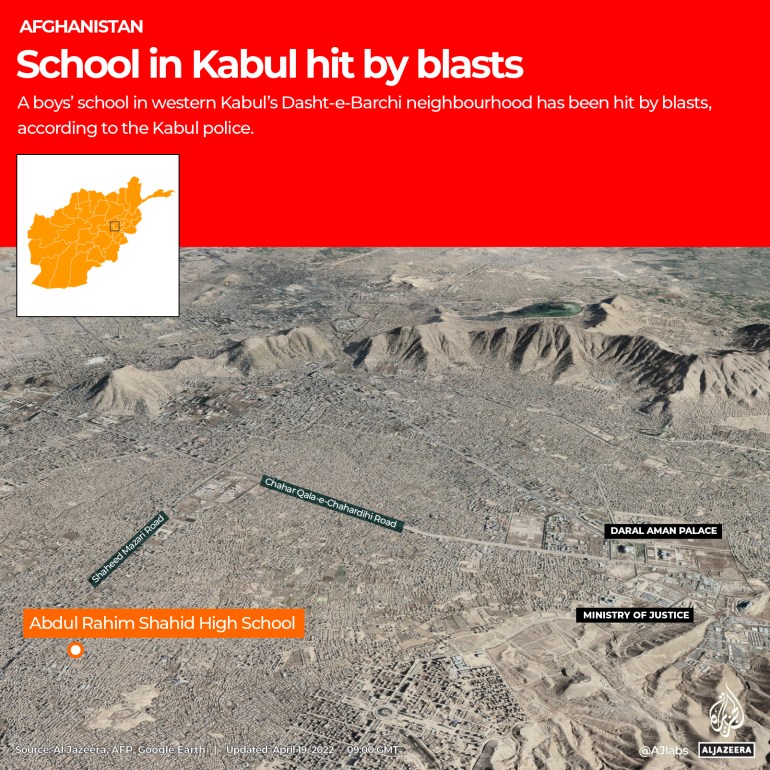 The attacks, which occurred in rapid succession, were being investigated and more casualties were feared. Several of the wounded were in a critical condition.

An official familiar with the matter, who declined to be named, told the Reuters news agency the explosive devices had been hidden in backpacks, and one detonated inside the school gates.

“Save the Children is outraged and strongly condemns the reported attack on a high school today in Kabul. We’re deeply saddened about reports that children have been injured, and possibly killed, in the blasts,” he said in a statement.

The UN’s high commissioner for refugees, Filippo Grandi, said on Twitter he joined the world body’s special representative for Afghanistan, Deborah Lyons, in offering condolences to families of the victims. He said the attack against the school was “horrific and cowardly”.

The attack follows a lull in violence over the cold winter months and after foreign forces withdrew last year.

Afghanistan’s Taliban rulers say they have secured the country since taking power in August. Many of the attacks in the past several months have been claimed by ISIL.

In May last year, at least 85 people – mainly female students – were killed and about 300 were wounded when three bombs exploded near their school in Dasht-e-Barchi.

ISIL has presented the biggest security challenge to the Taliban rulers, who swept into Kabul as the United States ended its 20-year war.