Russia’s President Vladimir Putin has said that the barrage of Western sanctions imposed against Russia over its invasion of neighbouring Ukraine has failed.

Putin said on Monday that the West “expected to quickly upset the financial-economic situation, provoke panic in the markets, the collapse of the banking system and shortages in stores”.

He added that “the strategy of the economic blitz has failed” and instead led to a “deterioration of the economy in the West”.

The Russian leader spoke in televised remarks during a video call with top economic officials.

Western countries have imposed unprecedented sanctions on Russia’s corporate and financial system since it sent troops into Ukraine on February 24 in what it calls a “special military operation”.

Putin noted that “Russia has withstood the unprecedented pressure”, arguing that the rouble has strengthened and the country has recorded a historic high trade surplus of $58bn in the first quarter of the year.

Instead, he contended that the sanctions backfired against the United States and its European allies, speeding up inflation and leading to a drop in living standards.

Putin acknowledged a sharp hike in consumer prices in Russia, saying they rose by 17.5 percent as of April on a year-to-year basis and directing the government to index wages and other payments to alleviate the impact of inflation on incomes.

Putin said Russia should use its budget to support the economy and liquidity in conditions of contracting lending activity even though the central bank’s rate cuts will make lending cheaper.

He also said Russia should speed up the process of using national currencies in foreign trade under the new conditions.

The World Bank has said it expects the economy to shrink by more than 11 percent this year.

The Central Bank of the Russian Federation more than doubled its key interest rate to 20 percent on February 28 as the first wave of sanctions hit, before trimming it to 17 percent on April 8. It is expected to lower it further at the next board meeting on April 29.

“We must have the possibility to lower the key rate faster,” Central Bank Governor Elvira Nabiullina said on Monday. “We must create conditions to increase the availability of credit for the economy.”

Although inflation in Russia has accelerated to its highest since early 2002, the Central Bank “will not try to lower it by any means – this would prevent business from adapting”, Nabiullina said.

The current inflation spike is caused by low supply, not high demand, and the Central Bank aims to bring it to its 4 percent target in 2024 as the economy adapts to western sanctions, she said, speaking at the lower house of parliament.

“The period when the economy can live on reserves is finite. And already in the second and third quarter, we will enter a period of structural transformation and the search for new business models,” Nabiullina said.

She also said Moscow planned to take legal action over the blocking of gold, forex and assets belonging to Russian residents, while adding that such a step would need to be painstakingly thought through.

Foreign sanctions have frozen about $300bn of the roughly $640bn that Russia had in its gold and forex reserves. 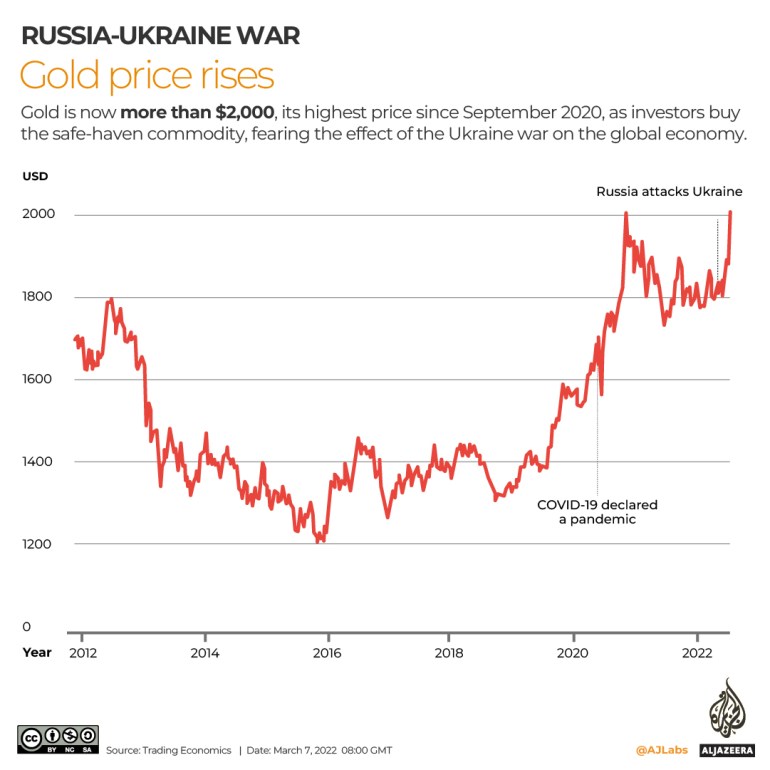 Sanctions had mainly affected the financial market, “but now they will begin to increasingly affect the economy”, Nabiullina said.

She said Russian companies would need to adapt.

“Russian manufacturers will need to search for new partners, logistics, or switch to the production of products of previous generations,” she said.

Exporters would need to look for new partners and logistical arrangements and “all this will take time”, Nabiullina said.

She said the Central Bank was considering making the sale of forex proceeds by exporters more flexible.

In February, Russia ordered exporting companies, including some of the world’s biggest energy producers from Gazprom to Rosneft, to sell 80 percent of their forex revenues on the market, as the Central Bank’s ability to intervene in currency markets was limited.

The bank may soften the terms of the timing and volume of mandatory sales, Nabiullina said.

Nabiullina’s comments “are directly or indirectly targeted at preventing the rouble from firming”, Promsvyazbank analysts said.

But the Russian currency extended gains on Monday, firming to 81.4025 to the euro, a level last seen on April 8, helped by upcoming tax payments that will prompt export-focused companies to convert FX revenues to roubles to meet their liabilities.