The EU aims to address rising wheat and fertiliser prices and expected shortages in the Middle East and North Africa (MENA) and the Balkans with “food diplomacy” to counter Russia’s narrative on the impact of its Ukraine invasion.

Food insecurity is causing “resentment” in vulnerable countries in these regions, while Moscow portrays the crisis as a consequence of Western sanctions on Russia, one European Union diplomat said.

This posed a potential threat to EU influence, the diplomat added, which it plans to tackle with “food diplomacy and a battle of narratives”.

MENA nations, particularly Egypt and Lebanon, are highly dependent on wheat and fertilisers from Ukraine and Russia. They face a price spike after a drop in supplies since Moscow began what it calls a “special military operation” in Ukraine.

“We cannot take the risk of losing the region,” a second European diplomat said.

The 27-member bloc also wants to boost international efforts to mitigate the effect of shortages and will together with the UN World Food Programme announce new initiatives soon.

France, the EU’s biggest agricultural producer, has been pushing an initiative called “FARM”, which would include a global food distribution mechanism for poorer nations.

France aims to secure international agreement on its plan before the end of its six-month presidency of the EU in June, Foreign Minister Jean-Yves Le Drian told reporters after talks on Tuesday between EU officials and UN food agencies in Rome.

Hungary has suggested boosting the EU’s agricultural output by altering its climate goals.

And the Food and Agriculture Organization of the United Nations (FAO) confirmed it was considering a food import financing facility.

However, the EU’s foreign affairs service said cooperation with the FAO’s Director-General Qu Dongyu in global food insecurity was “challenging”, an EU document seen by Reuters showed, adding the EU was pushing the FAO to act quickly.

The FAO did not comment on Qu’s relations with the EU.

In a list of recommendations on the FAO’s website, Qu said, “Countries dependent on food imports from Russia and Ukraine should look for alternative suppliers to absorb the shock.”

Brussels considers Russia’s communication campaigns on the food crisis as disinformation, the first diplomat said, adding the EU is not restricting food trade with Russia.

EU sanctions on Russian exports have usually exempted food, but not fertilisers, whose export from Belarus and Russia has been restricted.

“It’s not sanctions that are creating the risk of a future food crisis, it’s Russia’s occupation … of Ukraine,” France’s Le Drian said.

And while wheat storage facilities are full, Ukraine cannot export because of a shortage of fuel, EU officials said.

The EU is trying to facilitate food exports via Poland and is supporting the delivery of fuel to Ukrainian farmers to ease the situation, the officials said.

The EU is also providing financial support to the most vulnerable nations, last week announcing 225 million euros ($244m) in aid to the Middle East and North Africa.

Nearly half of this will be directed to Egypt, while Lebanon, Jordan, Tunisia, Morocco and the Palestinian Authority are to receive emergency funds of between 15 and 25 million euros ($16.2m and $27.1m) each.

Another 300 million euros ($324.8m) in agriculture support is to be provided to Western Balkan countries, as part of regular EU funding to the region, with Serbia considered of concern because of intensive Russian communications there, EU officials said. 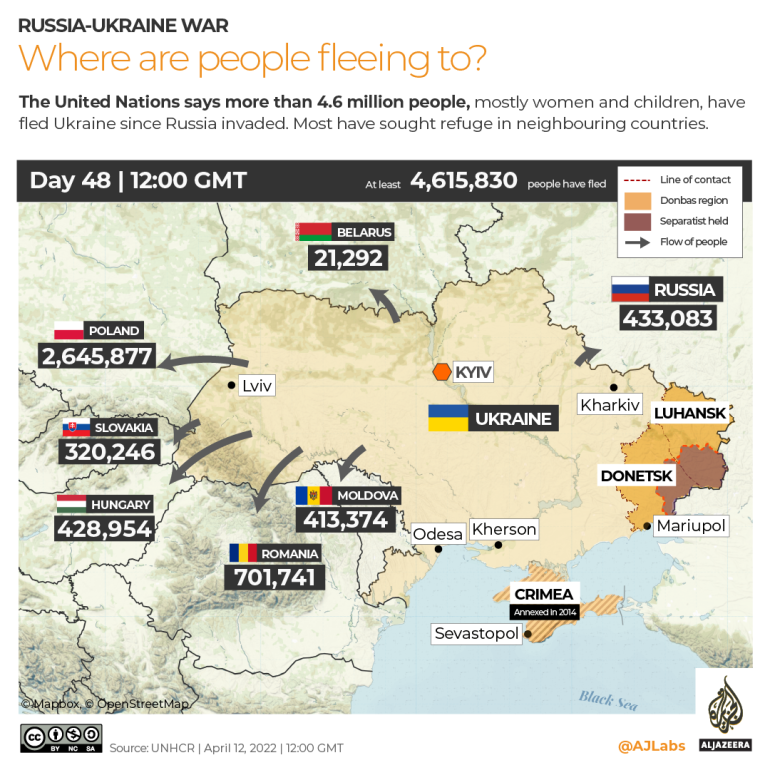