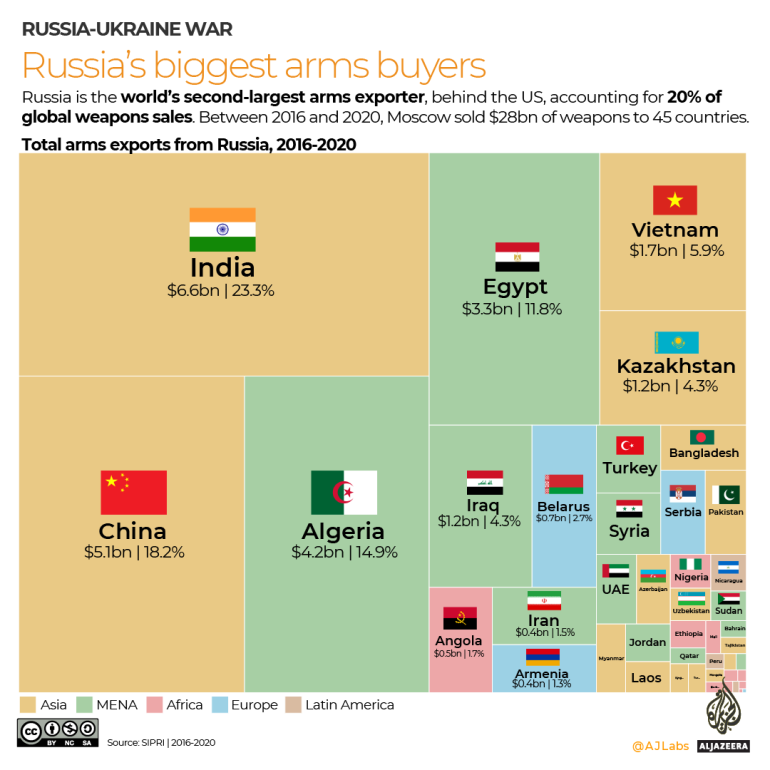 Aircraft make up nearly half (48.6 percent) of Russian arms exports. Between 2016 and 2020 Russia delivered about 400 fighter jets including the Sukhoi and MiG family of jets, to at least 13 countries. India bought at least half of them. India is also one of only six countries in the world that operate nuclear-powered submarines it has on lease from Russia.

While a lot of Russia’s weapons are upgrades to their Soviet-era arsenal, it is increasingly developing more advanced systems, including the S-400 surface-to-air missile defence system which has been sold to China, India, Syria and Turkey. Several other countries have expressed interest in purchasing the long-range mobile systems, which cost about $400m per unit. 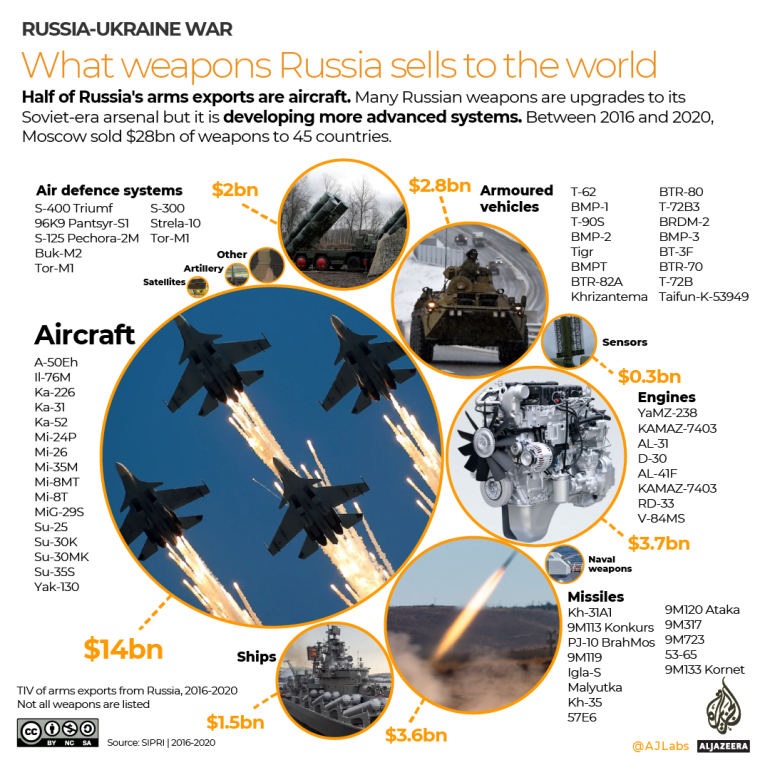 The most famous Russian weapon is the AK-47, or Kalashnikov.

Developed by Soviet army general Mikhail Kalashnikov in the 1940s, the cheap, durable and easy-to-use assault rifle is the standard infantry weapon for more than 100 countries. The AK refers to “Avtomat Kalashnikova”, Russian for automatic Kalashnikov, and the number “47” represents the year the rifle was developed.

There are an estimated 100 million AK-47s, or similar variants, around the world, making it the most widely owned assault rifle in the world. 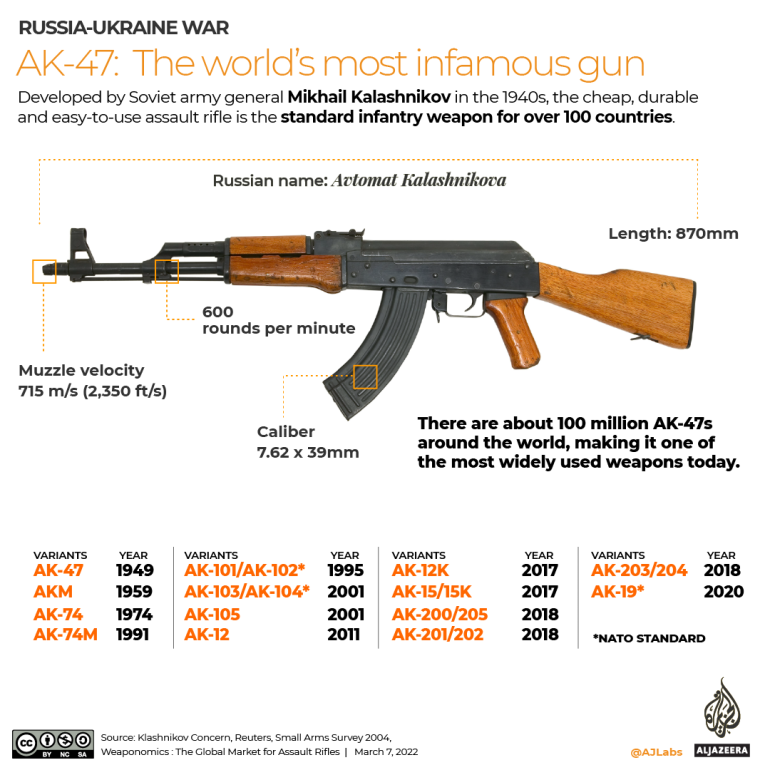 In 2020, the US spent $778bn on its armed forces – the largest military spend in the world and more than the next 10 highest-spending countries combined, according to SIPRI. 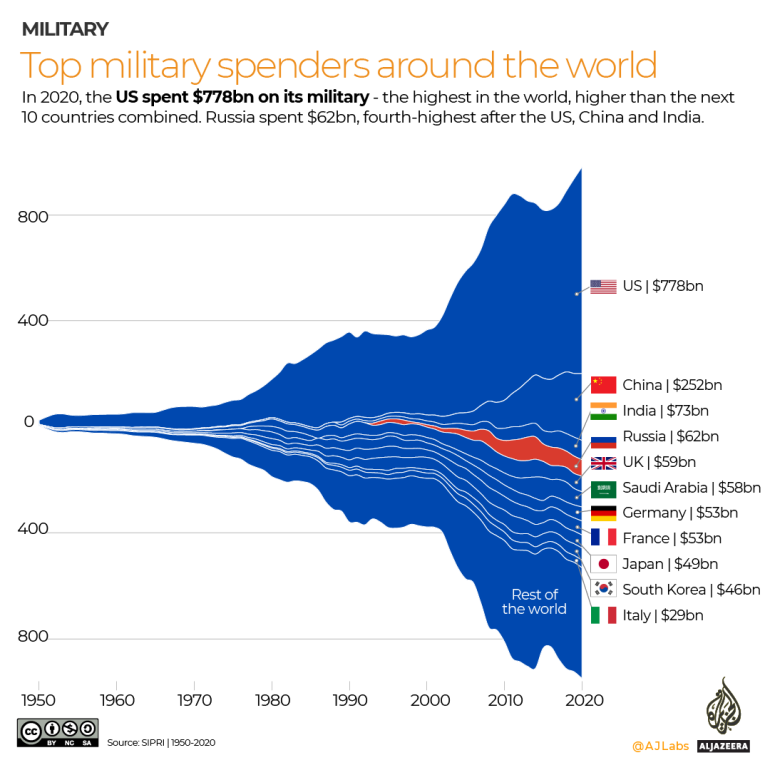 Russian military expenditure has grown significantly over the past three decades. In 2020, Moscow spent about $62bn (4 percent of its GDP) on its military.

Russia’s arms industry consists of some 1,300 companies employing about two million people. The largest of these companies is Rostec, founded in 2007 by President Vladimir Putin. 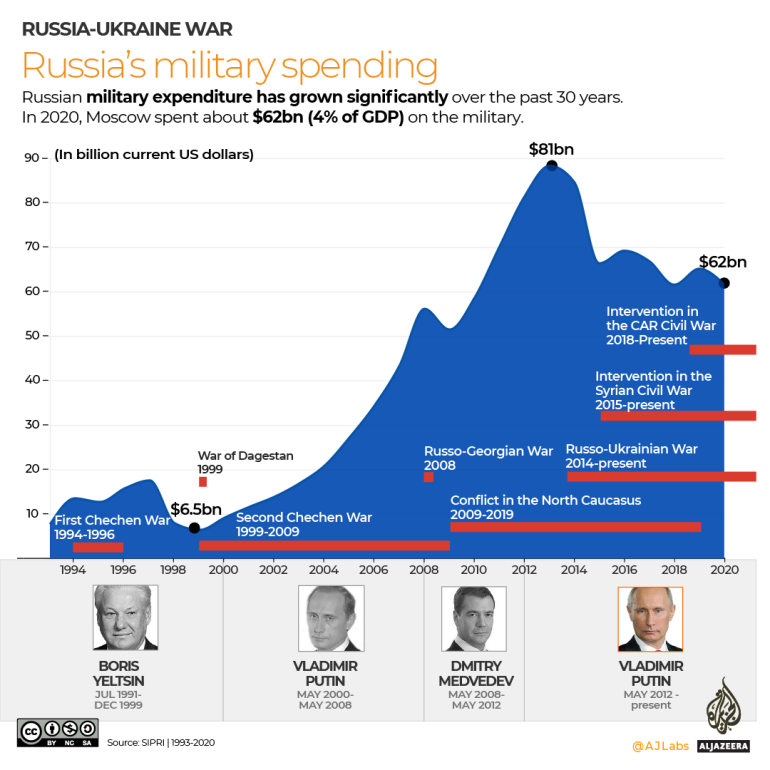 Russia has been in a number of conflicts since it became a federation after the dissolution of the Soviet Union in December 1991. In 1994, the Kremlin launched an offensive against Chechnya, a breakaway republic bordering Georgia, in an effort to crush its separatist leadership but were defeated after a 20-month battle.

Three years later, Russia launched the second Chechen War to retake the republic. It laid such a harsh siege on Grozny, Chechnya’s capital, that the United Nations called it “the most destroyed city on Earth”.

In 2015, Russia formally entered the Syrian civil war on the side of President Bashar al-Assad, and its heavy weaponry managed to shift the dynamics on the ground. The war, which has displaced tens of millions and killed hundreds of thousands, is now in its eleventh year.

In 2018, the government of the Central African Republic – embroiled in civil war – invited Russia to send military contractors to train its armed forces. UN experts have repeatedly expressed concerns over reports of “grave human rights abuses” by the mercenaries. Russia has rejected these claims.