A top Russian diplomat has announced plans for another ceasefire in Ukraine, saying Moscow will open humanitarian corridors to let civilians in besieged Ukrainian cities evacuate in the direction of their choice.

Vassily Nebenzia’s announcement at the United Nations Security Council on Monday came after Ukraine rejected an earlier Russian plan that proposed evacuation routes mostly to Russia and its ally, Belarus.

Nebenzia, the Russian ambassador to the UN, said Russian forces will observe the new ceasefire at 10am Moscow time (07:00 GMT) on Tuesday and open humanitarian corridors leading away from the cities of Kyiv, Kharkiv, Chernihiv, Sumy and Mariupol.

“Incidentally, this proposal makes no demands that citizens be sent necessarily to Russia – to Russian territories,” he said.

“There’s also evacuation offered towards Ukrainian cities to the west of Kyiv, and ultimately it will be the choice of the people themselves where they want to be evacuated to.”

But Ukrainian President Volodymyr Zelensky accused Russia of reneging on previous escape route agreements, and trying to stop people such as by planting explosives on roads.

“There was an agreement on humanitarian corridors. Did that work? Russian tanks worked in its place, Russian Grads (multiple rocket launchers), Russian mines,” Zelensky said in a video posted on Telegram.

Accusing Moscow of “cynicism”, Zelensky also said Russian troops destroyed buses that were due to evacuate civilians from the combat zones.

“They ensure that a small corridor to the occupied territory is open for a few dozen people. Not so much towards Russia as towards the propagandists, directly towards the television cameras,” he said.

“This includes allowing safe passage for civilians to leave areas of active hostilities on a voluntary basis, in the direction they choose.”

Griffiths also said the UN urgently needed a system of “constant communication” with all sides, adding it had sent a team to Moscow for a first technical meeting at the Russian defence ministry.

The goal, he said, is to work on better humanitarian civil-military coordination to be able to “scale up” UN operations.

A senior UN representative, speaking on condition of anonymity, told the AFP news agency that officials also hoped to ensure that humanitarian convoys were not targeted by Russian attacks.

To date, the UN has had no involvement in the establishment of humanitarian corridors.

More than 1.7 million Ukrainians have fled to Central Europe since Russia invaded their country on February 24. 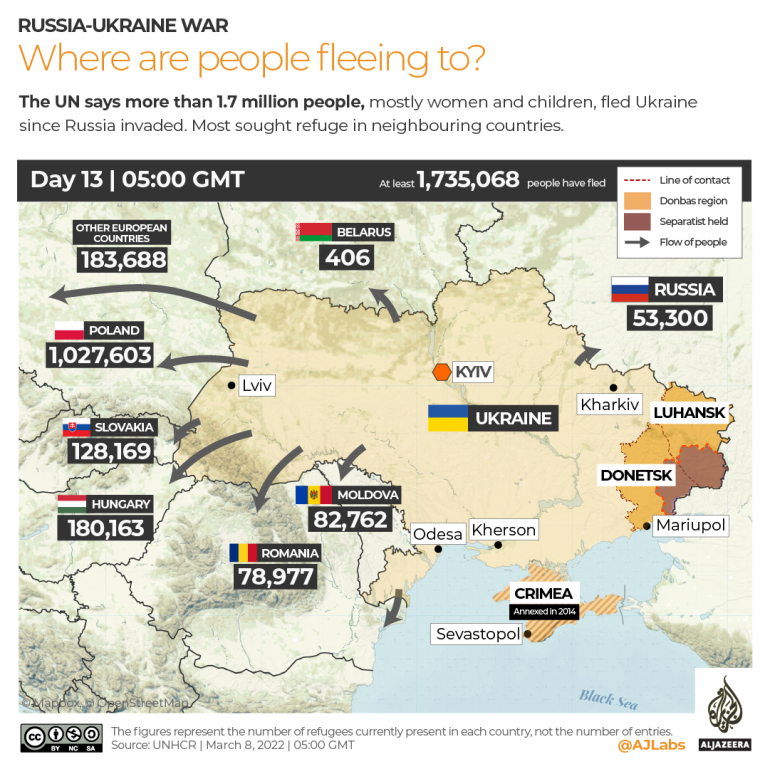