A second attempt to evacuate civilians from the besieged port city of Mariupol, in southern Ukraine, has collapsed as both Ukrainians and Russians blame each other for violating a previously agreed ceasefire.

“Amid devastating scenes of human suffering in Mariupol, a second attempt today to start evacuating an estimated 200,000 people out of the city came to a halt,” the International Committee of the Red Cross said in a statement on Sunday.

The ceasefire was meant to last from noon until 9pm local time (19:00 GMT) to allow civilians to move from Mariupol to Zaporizhzhia.

Al Jazeera’s Charles Stratford drove 60km along the route of the planned humanitarian corridor on Sunday. He said he had been expecting to see buses full of civilians moving towards the direction of Zaporizhzhia amid the ceasefire

“What we saw was an increasing number of private vehicles taking families out; there was no sign of that convoy,” he said.

A source from the Azov Battalion, a paramilitary group that is now part of Ukrainian security services, told Stratford that Russian forces had started shelling as efforts to get people on buses in Mariupol began. Al Jazeera was not able to independently verify the claim.

Mariupol’s city council said that the convoy of evacuees was not able to depart due to attacks by Russian forces. “It is extremely dangerous to take people out under such conditions,” the city council said in a statement. 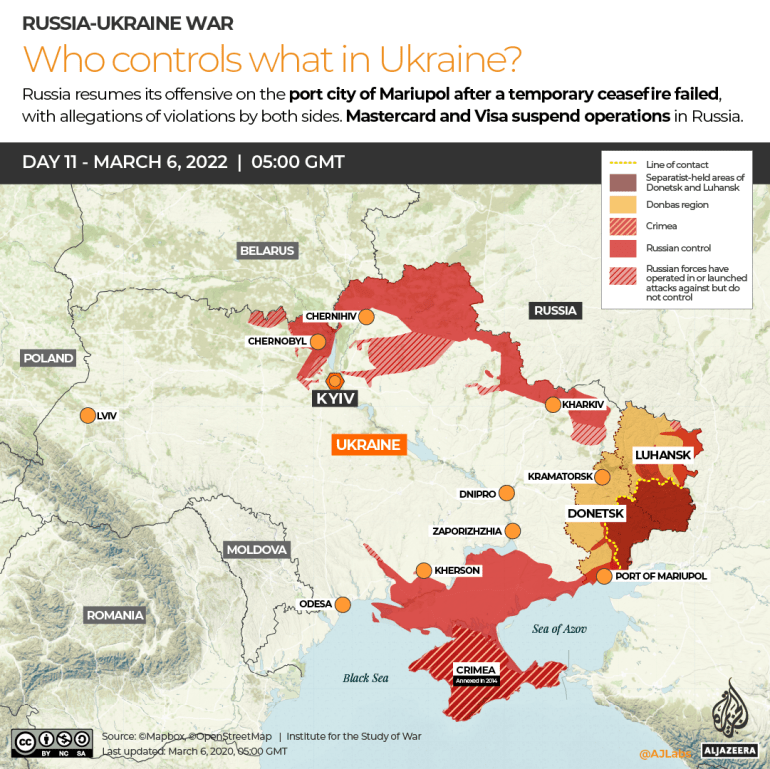 Sunday marks the second failed attempt to establish a humanitarian corridor along the same route. In a second round of negotiations held on Thursday, Kyiv and Moscow had already agreed on a first ceasefire to be implemented on Saturday. But the deal fell apart with both sides accusing each other of breaking the terms of the agreement.

Mariupol has been pounded by heavy shelling since Thursday, when Russian forces encircled the city of about 400,000 people. Residents were left without food, heat and electricity in a situation that humanitarian aid workers have described as “catastrophic”.

“We know from our staff that they are desperately trying to keep safe as heavy attacks continue and food supplies run dangerously low,” Laurent Ligozat, the emergency coordinator for Doctors Without Borders in Ukraine, said on Saturday.

“Internet and phone services have been cut off,” he said. “Hospitals, supermarkets, and residential buildings have suffered heavy damages.”