US Secretary of State Antony Blinken has met with his Ukrainian counterpart Dmytro Kuleba on Ukraine’s border with Poland to discuss how to further support Kyiv while isolating Russia as the war entered its tenth day.

The two leaders held talks on Saturday at the border where so far more than 750,000 refugees have passed through amid the nearly 1.5 million people who are fleeing Ukraine into neighbouring countries, UN figures show. Poland has so far received the highest number, followed by Hungary.

The two men walked on both sides of a painted line that appeared to mark the end of Polish territory.

“The entire world stands with Ukraine, just as I am standing here in Ukraine with my friend, my colleague,” Blinken said.

“I hope the people of Ukraine will be able to see this as a clear manifestation that we have friends who literally stand by us,” Kuleba responded.

The two discussed the provision of weapons to Ukraine and the campaign to isolate Russia internationally and damage its economy with sanctions, Kuleba said. Kyiv will win its war with Russia eventually, he said, but its international supporters need to provide more help to end the conflict sooner.

“We need… big air-defence systems to ensure the safety of our skies. If we lose the skies, there will be much more blood on the ground,” Kuleba said.

NATO said Friday that the idea would bring the alliance into direct conflict with Russia and risked expanding the war.

“I think it’s a sign of weakness,” Kuleba said as he and Blinken stood together on the border.

“It’s the people of Ukraine who will pay the price for the reluctance of NATO to act,” he added. 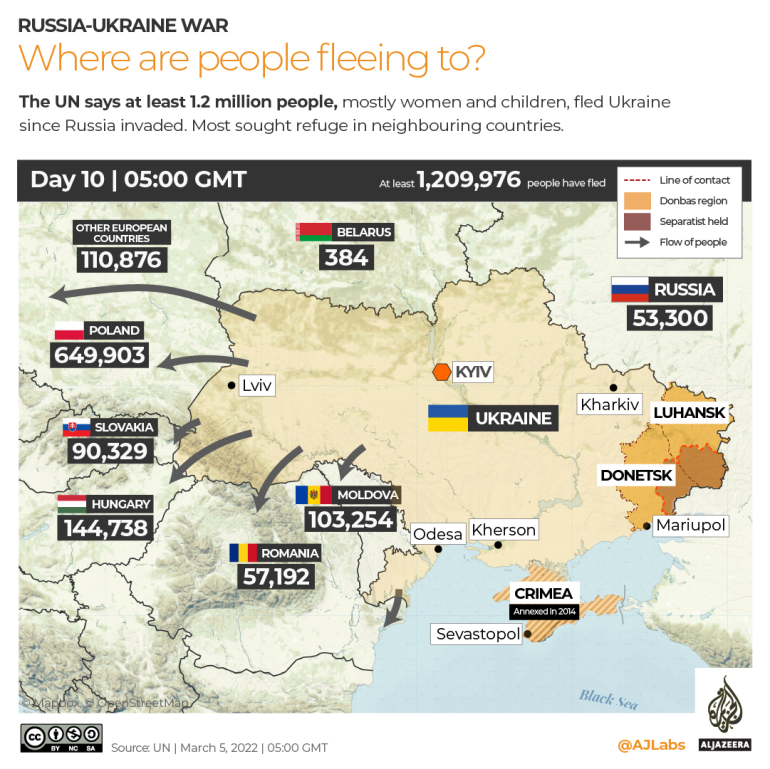 Kuleba said he saw no progress in talks with Russia on a ceasefire, being held on Ukraine’s border with Belarus, but “we have to continue talking”.

On Thursday, the two parties seemed to agree on a halt of hostilities to allow the evacuation of civilians through humanitarian corridors, starting with the city of Mariupol and Volnovakha. But the ceasefire collapsed with both sides accusing each other of resuming hostilities. A third round of talks is scheduled for Monday.

Blinken arrived in Poland from Brussels, where he met foreign ministers from the NATO alliance, the G7 grouping and the European Union on Friday to discuss the West’s efforts to deter Russia through a programme of harsh sanctions.

Blinken said the sanctions were producing “concrete results”, referring to the damage to Russia’s economy in recent days. “That pressure too will not only continue, it will grow until this war of choice is brought to an end,” he said.

Kuleba on Saturday expressed gratitude for global coordination in placing hefty sanctions on Russia in support of Ukraine but he expressed concern that countries would grow weary of implementing those sanctions, especially as they also have an economic effect on the countries enforcing them.

“If anyone in the world one day starts feeling sanctions fatigue, for example, then more people in Ukraine will be dying, suffering.”