Ukrainian authorities said on Friday Russian shelling had caused a fire at a building in the plant complex that was later put out. The blaze raised alarm from leaders worldwide of a potential massive disaster. Russia blamed the attack on Ukrainian saboteurs, calling it a “monstrous provocation”. 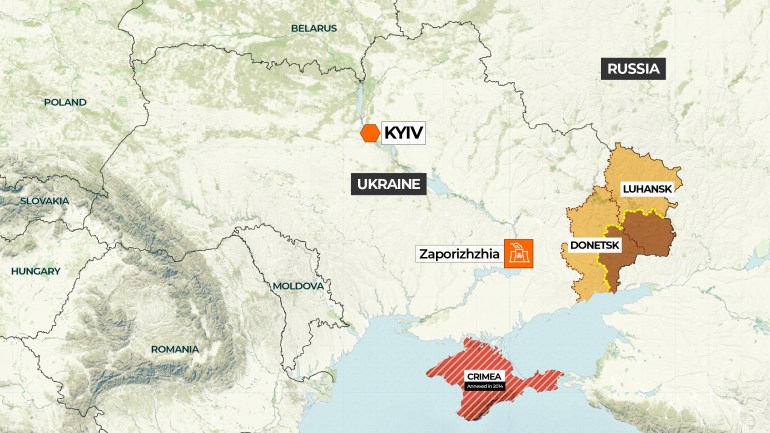 Where is it located?

The Zaporizhzhia nuclear power plant is located in the southern Ukraine steppe on the Dnieper River, some 550 kilometres (342 miles) southeast of Ukraine’s capital, Kyiv, and about 525km (325 miles) south of Chernobyl, the site of the world’s worst nuclear power plant accident in 1986, which has also now been seized by Russian forces.

The plant has a total capacity of about 6,000 megawatts, enough to power about roughly four million homes.

On Wednesday, residents carrying Ukrainian flags had blocked the road to the plant, in an apparent standoff with Russian forces.

But on Friday Russian troops were accused of attacking the plant, in an assault Ukraine’s President Volodymyr Zelenskyy branded “nuclear terror” and said could endanger the continent.

A video feed from the plant showed shelling and smoke rising near a building at the plant compound.

The night-time footage showed one building aflame, and a volley of incoming shells, before a large candescent ball lit up the sky, exploding beside a car park and sending smoke billowing across the compound.

⚡️⚡️⚡️Surveillance cameras captured moments of the shelling of the #Zaporizhzhia NPP pic.twitter.com/ZNLX4pZeXI

The emergency services, in a statement on Facebook, said “the fire in the training building of Zaporizhzhia NPP in Energodar was extinguished” at 06:20 (04:20 GMT).

“There are no victims,” it added.

The Ukraine regulatory authority also said the fire at the site had not affected “essential” equipment and personnel were taking mitigatory actions. They also said there “was no reported change in radiation levels at the plant”.

The mayor of the nearby town of Enerdohar said fierce fighting and “continuous enemy shelling” had caused casualties in the area, without providing details.

Is there a radiation danger?

The reactors at the Zaporizhzhia plant operate on fuel enriched with fissile isotope uranium-235.

They work by the core heating steam, but unlike other reactors, the nuclear-contaminated steam is not used to generate energy. Instead, it is used to power another uncontaminated steam circuit which then turns the turbines.

This means that radiation levels for workers at the plant are relatively low.

Background radiation levels around the plant are currently about 0.1 microsieverts per hour, according to the plant’s operator.

That is below the global average of background radiation and much less than flying on an aeroplane or getting an x-ray.

During the Chernobyl disaster, radiation levels were about 300 sieverts per hour, many millions of times higher.

United States energy secretary Jennifer Granholm and The International Atomic Energy Agency also confirmed there were no “elevated radiation readings near the facility”.

The plant’s reactors are protected by robust containment structures and reactors are being safely shut down. 3/3

“These plants were never designed to be in a warzone and they are not capable of dealing with the vulnerabilities that are inherent with being in a fire zone,” Henry Sokolski, executive director of the Nonproliferation Policy Education Center, told Al Jazeera.

“If they do other military operations either there or in other reactors, something relating to the main power core or the spent fuel pond would release an enormous amount of radioactivity.”

Early reports of the incident at the power plant sent financial markets in Asia spiralling, with stocks tumbling and oil prices surging further.

There were quick reactions to the attack. Zelenskyy in a video address called on “Europeans, please wake up. Tell your politicians Russian troops are shooting at a nuclear power plant in Ukraine.”

.@ZelenskyyUa: “Russian army has opened fire on Zaporizhzhia NPP. No state except Russia has ever opened fire at nuclear power units. For the first time in human history, a terrorist state has resorted to nuclear terror. Only immediate European action can stop Russian troops”.

US President Joe Biden and United Kingdom Prime Minister Boris Johnson both spoke with Zelenskyy to get an update on the situation at the plant.

“President Biden joined President Zelenskyy in urging Russia to cease its military activities in the area and allow firefighters and emergency responders to access the site,” the White House said.

.@POTUS also spoke this evening with Under Secretary for Nuclear Security of the U.S. Department of Energy and Administrator of the National Nuclear Security Administration to receive an update on the situation at the plant. The President will continue to be briefed regularly.

Johnson said Russian forces must immediately quit their attack and agreed with Zelenskyy that a ceasefire was crucial.

“The prime minister said the reckless actions of President Putin could now directly threaten the safety of all of Europe,” Downing Street said.