A powerful bomb has exploded inside a Shia mosque in Pakistan’s northwestern city of Peshawar, killing at least 62 people and wounding dozens more, many of them critically.

The explosion occurred as worshippers had gathered in the Kucha Risaldar mosque in Peshawar’s old city area for Friday prayers. More than 190 people were left injured by the blast.

ISIL (ISIS) later claimed responsibility for the attack in a statement.

One assailant and one policeman were killed in the gun battle, and another policeman was wounded. The remaining attacker then entered the mosque and detonated a bomb.

A witness who identified himself as Naeem lives next door to the mosque.

“First I heard five to six gunshots and then I saw the suicide bomber enter the mosque and a huge explosion occurred,” told Al Jazeera. “The doors of my house opened with a bang and I fell down on the ground. When I entered the mosque, there was smoke and dust and people were lying in blood.”

The bomb disposal unit said about 5kg of explosives was used and ball bearings were added. Ambulances rushed through congested narrow streets and took the wounded to Lady Reading Hospital.

“We are in a state of emergency and the injured are being shifted to the hospital. We are investigating the nature of the blast but it seemed to be a suicide attack,” police officer Mohammad Sajjad Khan said. 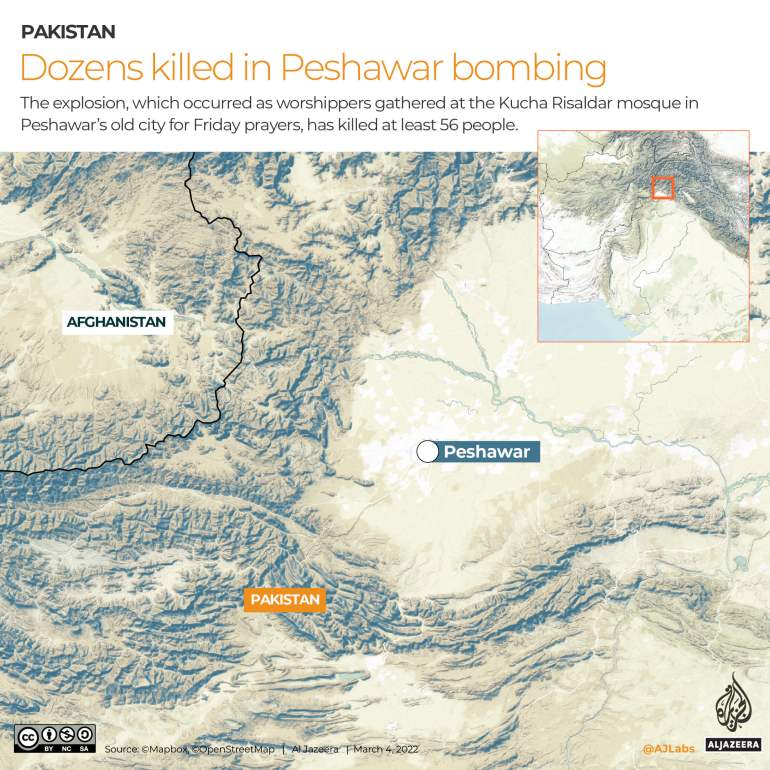 Similar attacks have occurred in Peshawar – 190km (120 miles) west of the capital, Islamabad – located near the border with neighbouring Afghanistan.

Shayan Haider, a witness, had been preparing to enter the mosque when the powerful explosion threw him to the street.

“I opened my eyes and there was dust and bodies everywhere,” he said.

At the Lady Reading Hospital’s emergency department, there was chaos as doctors struggled to move the many wounded into operation theatres.

“I saw a man firing at two policemen before he entered the mosque. Seconds later I heard a big bang,” said witness Zahid Khan.

Retired army officer Sher Ali who had been inside the mosque at the time of the explosion was injured by flying shrapnel. He made an impassioned plea to the Pakistani government for better protection of the country’s minority Shia Muslims.

“What is our sin? What have we done? Aren’t we citizens of this country?” he said from the emergency department, his white clothes splattered with blood.

In recent months, Pakistan has experienced an increase in violence. Dozens of military personnel have been killed in scores of attacks on army outposts along the border with Afghanistan.

Zahir Sherazi contributed to this report from Peshawar.