Russia said on Thursday that it had taken control of Mariupol, apart from the sprawling, Soviet-era Azovstal steel plant, where hundreds of Ukrainian fighters and civilians remain holed up.

Ukrainian officials disputed Russia’s claim of victory, saying the strategic, southeastern port city remained in their hands, as they called on Moscow to facilitate urgent evacuations.

On the Sea of Azov, Mariupol was home to about 400,000 people before the war began on February 24 with Russia’s full-scale invasion.

Weeks of relentless Russian bombardment destroyed much of the city, while a humanitarian crisis deepened with civilians who failed to flee trapped amid the fighting, with few supplies.

Tens of thousands are feared to have died in the city.

Its seizure would mark Russia’s most significant capture of territory in this conflict, enabling Moscow to create a land bridge to the annexed Crimean Peninsula and potentially freeing up Russian troops to push ahead with their offensive in Ukraine’s eastern Donbas region.

Here is a timeline detailing the unfolding events in Mariupol:

As the invasion begins, Russian troops advance towards Mariupol from parts of eastern Ukraine controlled by Russia-backed separatists.

Boychenko says Mariupol has lost power and has no running water or gas supplies. Local authorities later pinpoint this day as the start of Russia’s blockade. Russia reiterates that it does not target civilians.

The city is running out of food, the mayor says. He appeals for military assistance and for a humanitarian corridor to evacuate some of the city’s 400,000 residents.

Russia and Ukraine agree to a partial ceasefire to open a humanitarian corridor for several hours. The ceasefire collapses, with both sides blaming each other for the failure.

A Russian air raid hits a maternity hospital, triggering global outrage. Local authorities say three people are killed and later report the death of another pregnant woman. Russia says the hospital had no patients, but photos from the scene suggest otherwise.

A humanitarian corridor is agreed with Russia and the first convoy of evacuees leaves Mariupol in 160 civilian cars.

Ukraine accuses Russia of illegally deporting thousands of Mariupol residents to Russia under the guise of evacuation. Earlier, Russian media reported that “evacuation buses” were taking civilians from Mariupol to Russia.

Ukraine accuses Russia of bombing a school where about 400 people had taken refuge.

Moscow calls on Ukrainian forces in Mariupol to surrender, saying they will be given safe passage out of the city. Ukraine rejects the proposal.

Boychenko’s office estimates that nearly 5,000 people have been killed in Mariupol since the start of the siege and that 40 percent of buildings were destroyed entirely.

A Ukrainian presidential adviser says half the city is in the hands of Russian forces. Russia announces a new ceasefire to evacuate civilians.

The International Committee of the Red Cross (ICRC) says its team was unable to reach the city to help people leave.

Kyiv announces the evacuation of several thousand more civilians from the city, but accuses Russia of blocking the ICRC’s efforts.

A new mayor of Mariupol installed by pro-Russian forces, Konstantin Ivashchenko, says about 5,000 civilians have died in the city.

Boychenko, who would go on to leave Mariupol, says about 100,000 civilians still require evacuation.

Ukrainian troops say they are preparing for a “last battle”, adding they have been “surrounded” by Russian forces.

Boychenko accuses Moscow of carrying out a “genocide”.

Kyiv says it has no information about the alleged incident.

The head of the United Nations World Food Programme says people in Mariupol are being “starved to death” and laments aid workers’ lack of access to the city. 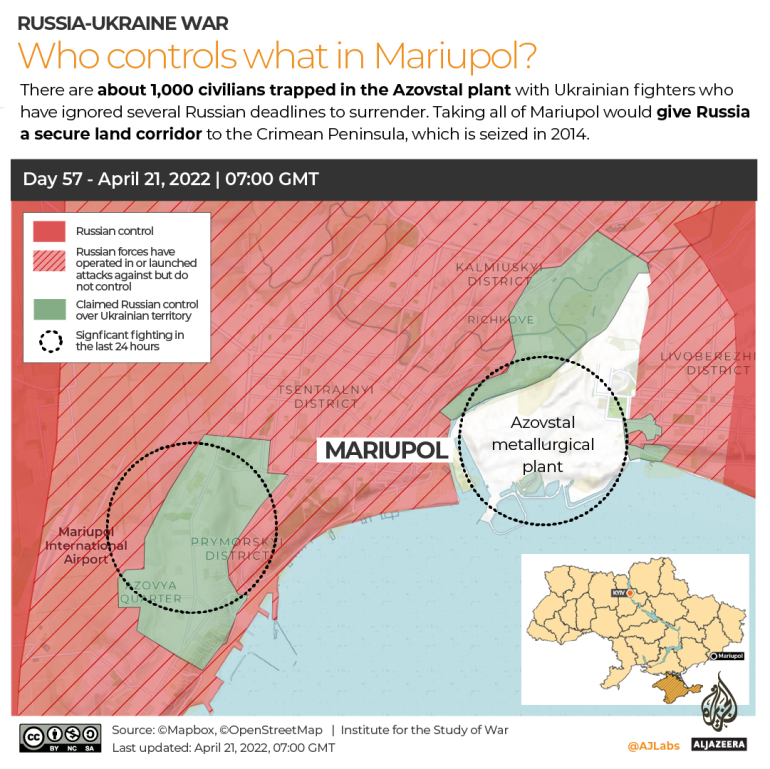 Moscow calls on them to surrender, saying it is their only “chance to save their lives”.

Zelenskyy says Ukraine could withdraw from talks with Russia over ending the war if the troops are killed.

Troops in Mariupol again refuse to surrender after Moscow set a deadline.

Mariupol’s city council says about 1,000 civilians are hiding in underground shelters beneath the vast Azovstal steel plant as Kyiv calls on Russia to allow civilians to leave.

Russia says it has opened up an evacuation corridor for Ukrainian forces who want to leave Azovstal after issuing another surrender demand.

Kyiv says it is ready to negotiate with Russia in Mariupol and blames Moscow for violating a previous agreement to allow civilians to leave Azovstal.

Ukrainian troops warn they may be facing their last days, “if not hours”, and plead for international help.

Women, children and the elderly are evacuated from the city.

Russia says it has “liberated” the strategic port city of Mariupol in its entirety, aside from the steelworks.

President Vladimir Putin orders Moscow’s troops not to storm the site, but to blockade it “so that not even a fly can escape”.

Putin calls on Ukrainian fighters at Azovstal to surrender, saying Russia will treat them with respect and provide medical assistance to those who are wounded.

Kyiv calls on Moscow to evacuate the civilians and injured soldiers to Ukrainian territory.