The separatist leader of Georgia’s breakaway region of South Ossetia says the Moscow-backed territory is planning to take steps in the near future to become part of Russia.

Russia recognised South Ossetia as an independent state in 2008 after fighting a short war with Georgia. It has provided the separatist region with extensive financial support, offered Russian citizenship to its population and stationed thousands of Russian troops there.

“I believe that unification with Russia is our strategic goal, our path, the aspiration of the people,” Anatoly Bibilov, the separatist leader of South Ossetia, was quoted as saying by the press service of the United Russia party.

“We will take the relevant legislative steps shortly. The republic of South Ossetia will be part of its historical homeland – Russia.”

Bibilov’s spokeswoman Dina Gassiyeva on Thursday told Russia’s RIA Novosti news agency that the region planned to hold a referendum and the decision was “linked with the window of opportunity that opened in the current situation”, referring to Russia’s invasion of Ukraine.

Georgian Foreign Minister David Zalkaliani said on Thursday “it is unacceptable to speak of any referendums while the territory is occupied by Russia”.

“Such a referendum will have no legal force,” he told journalists. “The European Court of Human Rights has ruled that the Georgian region is occupied by Russia.”

Also on Thursday, Kremlin spokesman Dmitry Peskov said Moscow has not taken any “legal” steps on the matter.

“But at the same time, we are talking about people of South Osseita expressing their opinion and we treat it with respect,” Peskov told reporters.

Meanwhile, Abkhazia, another Russian-backed breakaway region of Georgia, said on Wednesday it had no plans to join Russia.

“Russia is our strategic partner, a dear and close state, but we in the republic [of Abkhazia] have no intention of joining the Russian Federation,” parliamentary speaker Valery Kvarchia told Interfax news agency.

Another official from Abkhazia, Security Council Secretary Sergei Shamba, told the TASS news agency that the region supported South Ossetia’s aspirations but that it did not share its goal to join Russia. 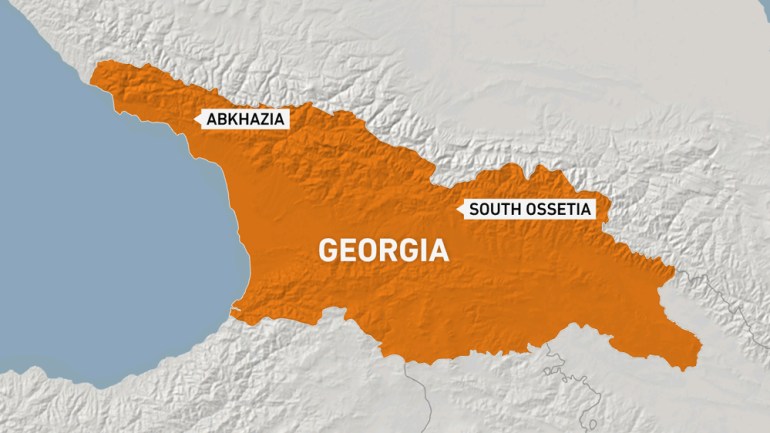 Separately, on Wednesday, South Ossetia’s former separatist leader Eduard Kokoity said that “hundreds of fighters” had joined Russia’s war in Ukraine, adding that they were treated as “cannon fodder”.

“I don’t doubt that the boys who already returned home could go back to the special operation zone and help complete the liberation of Donbas IF THEY FIND IT NECESSARY,” Kokoity wrote on Telegram on Wednesday according to reports by news outlet Ekho Kavkaza.

“But I’d like to emphasise that the organisation of their participation should be maximally responsible. We have to protect each life,” he wrote.

A day before he criticised Moscow for the deployment of South Ossetians in the region of Donbas, saying his people were not “cannon fodder”.

However, he was also clear on his support for Russia.

“We understand that if Russia loses, all of us will lose,” he was quoted by the Ekho Kavkaza website as saying. “No man in Ossetia says no. On the contrary, we say: ‘Yes, we support Putin, we support Russia.'”

South Ossetia and Abkhazia broke away from Georgia with Russian backing in the early 1990s as the Soviet Union collapsed. Moscow gained complete control over the two regions in 2008.

As in the Russian-speaking Donbas region of eastern Ukraine, Moscow has used recognition of the breakaway regions, and the awarding of citizenships, to maintain an armed presence in an area of the former Soviet Union that it sees as part of its natural sphere of influence.

With additional reporting by Mansur Mirovalev