Arguably frustrated by the lack of progress in his war on Ukraine, President Vladimir Putin has put Russia’s deterrent weapons – including its nuclear arms – on alert.

Since this provocation, the question has become all the more critical as to how many nuclear weapons Russia possesses and whether these could be indeed a realistic option for Putin.

“Putin is using his nuclear arsenal in this way because it is a tool he has, one that is mysterious and utterly terrifying,” Dakota S Rudesill, associate professor at Mershon Center for International Security Studies at Ohio State University, told Al Jazeera.

Moreover, the resistance the Russians have met in Ukraine so far has played a pivotal role in the decision, he said.

“Putin is reaching for it at this point because the war is probably not going as well as he anticipated. He wants to change the game and regain the initiative, wants his adversaries to be off-balance and frightened, wondering how he might escalate next and against whom,” Rudesill added.

However, one can also argue that Putin’s announcement was somewhat of a strategic mistake, said Alexander Lanoszka, assistant professor at the department of political science at the University of Waterloo.

“It seemed that it was an inevitable tactic played too early. For Putin, this might be problematic because future threats might not be believed. The United States, NATO, and the EU do not appear to be too fazed by it because we have observed no changes in the US, French, or British nuclear operations,” Lanoszka said.

However, it is particularly its nuclear capacity that makes Russia a force to be reckoned with. 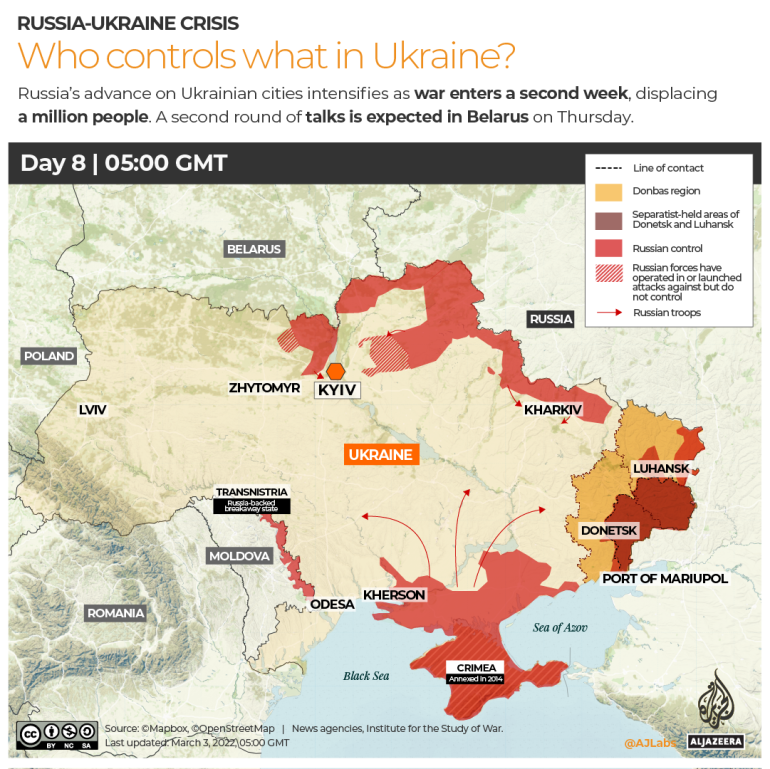 Its stockpile makes Russia the largest nuclear power in the world, closely followed by the United States. The two together possess about 93 percent of all nuclear weapons globally.

The US possesses 3,750 active and inactive nuclear warheads with an estimated 150 at various sites in Europe.

The United Kingdom has a sea-based deterrent that has expanded to about 225 nuclear warheads, about half of which are operationally available on four submarines.

At any given moment, one-third or so are on active deployment. France has a nuclear stockpile of about 300 nuclear weapons, said Lanoszka.

This discrepancy in numbers is the reason why observers are pointing to gaps in NATO’s deterrent posture.

The sheer number of nuclear warheads available globally becomes even more terrifying when looking at how swiftly they can be launched.

However, there has been speculation on Russia’s nuclear modus operandi.

“For many decades, there has been debate in the West about whether the Soviet Union built a system that would allow for the automated launch of nuclear weapons in the event that the Soviet leadership was decapitated,” Rudesill said.

“Keep in mind that Putin’s recent announcement most relates to staffing at various nuclear command and control centres. It does not yet appear that strategic and nonstrategic forces have changed their posture. The risk of nuclear weapons use is obviously elevated relative to normal circumstances, but the threat remains low for now.”

The primary reason that has prevented any nuclear attacks in the past is mutual assured destruction (MAD), a doctrine of military strategy and national security policy in which a full-scale use of nuclear weapons by two or more opposing sides would cause the complete annihilation of both the attacker and the defender.

Moreover, there is still Putin’s persona to consider, said Erika Simpson, professor of international politics at Western University, president of the Canadian Peace Research Association, and the author of NATO and the Bomb.

“Putin’s threat to use nuclear weapons over Ukraine is crazy. Is he a madman? Has he lost his mind over the last two years, isolated from his family due to COVID? It looks like it. And nuclear deterrence does not work with an irrational madman,” Simpson told Al Jazeera.

“MAD is supposed to apply – but we did not expect Putin to invade a sovereign country and put Russian forces at risk with over 4,200 casualties already. Putin is risking soldiers’ lives, like pawns in a chess game… These factors make it impossible for nuclear deterrence to work properly as it requires rational decision-makers, as we learned from the 1962 Cuban missile crisis,” she said.

“A nuclear attack at the tactical level may be possible, but then a dangerous MAD escalation will ensue.”