Russia’s invasion of Ukraine has triggered severe economic sanctions and condemnation from the United States and its allies.

Oil prices have surged due to concerns about disruptions to global supply, eight percent of which comes from Russian exports, leading traders to seek out alternative sources in an already tight market.

The spiralling prices are a particular concern for the US, the world’s biggest oil consumer, where inflation is already running at a four-decade high.

How much oil does the US import from Russia?

The US imports Russian oil, but it is not highly dependent on the country for its supplies.

In 2021, the US imported an average of 209,000 barrels per day (bpd) of crude oil and 500,000 bpd of other petroleum products from Russia, according to the American Fuel and Petrochemical Manufacturers (AFPM) trade association.

According to the AFPM, imports of Russian crude oil have increased since 2019, when the US imposed sanctions on Venezuela’s oil industry. US refiners also temporarily boosted Russian imports last year after Hurricane Ida disrupted oil production in the Gulf of Mexico. 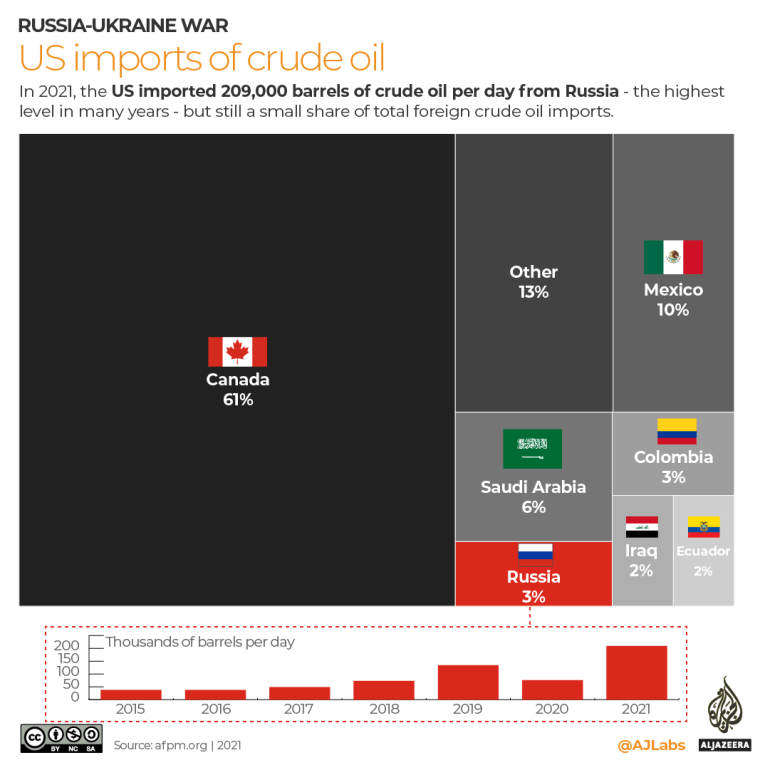 How would restrictions on Russian oil exports affect the US?

There are two potential scenarios to consider, according to analysts.

“The first is with the oil supply, and the short answer is it would not affect the US that much,” Adam Pankratz, a professor at the University of British Columbia’s Sauder School of Business, told Al Jazeera.

“If it really goes drastic the US has a strategic petroleum reserve,” he said.

However, according to Pankratz, there is also a broader economic effect to consider.

While the sanctions against Russia have not specifically targeted its energy supply, the measures do cover banks and financial institutions, which indirectly hampers the country’s ability to export oil and other fuels.

On Wednesday, crude prices surged to more than $110 a barrel, posing a challenge for governments trying to curb rising inflation.

“While there aren’t sanctions in place [against the oil market] we are seeing a lot of self sanctioning,” Pankratz said.

“So banks and traders … they don’t know exactly what’s going to get caught up in the Russian sanctions, and they don’t want to risk getting an investigation for having imported or dealt with a Russian company when they shouldn’t have been doing that.”

“It’s not sanctioned fully, but it’s having trouble being sold, because people are nervous [about violating sanctions],” he said.

What will be the political fallout of rising oil prices for the Biden administration?

Inflation in the US rose at an annual rate of 7.5 percent in January, the Bureau of Labor Statics said, the fastest pace since July 1982.

That translates into a $276 increase in monthly expenses for the average American household, according to a recent study by Moody’s Analytics.

The war in Ukraine is likely to only make the situation worse.

Rising prices have already dealt a blow to US President Joe Biden’s approval ratings, which are in the doldrums after sinking to a record low of 33 percent in January. Further increases in inflation would further weaken the president’s standing ahead of crucial mid-term elections in November.

“People tend to vote on what we would call the kitchen table issues,” Pankratz said. “What’s the price of gas? How much can we afford to go on holiday? Families are asking themselves if they are richer this year … and in that regard, inflation could be a serious problem.”

Inflation is robbing families of the gains they might otherwise feel from our growing economy. I get it.

That’s why my top priority is getting prices under control.