About 300 people were killed after a Russian air attack blew up a drama theatre in Mariupol last week, Ukrainian authorities have claimed.

The theater had been used as a shelter for civilians as Russian forces increased their attempts to take the Ukrainian port city.

If confirmed, the catastrophic loss of life is likely to further crank up pressure on Western nations to step up military aid.

For days, local authorities in Mariupol were unable to give a casualty count for the March 16 attack. However, on Friday, the city council cited witnesses who reported the death toll. It was not immediately clear whether emergency workers had finished excavating the theatre ruins or how witnesses arrived at the figure of lives lost.

“From witnesses comes information that about 300 people died in the Mariupol Drama Theatre as a result of the bombing by a Russian plane,” the Mariupol city council said in a statement.

“Up until the very last moment, one does not want to believe this horror. But the words of those who were inside the building at the time of this terrorist act says the opposite.”

Petro Andrushenko, an adviser to the mayor of Mariupol, gave the same estimate without providing any further details.

The head of the United Nations human rights monitoring mission in Ukraine, Matilda Bogner, also said that her team had not been able to obtain enough information to verify the theatre death toll.

“We are getting less and less information from there [Mariupol] and in that specific case we are still trying to verify the details,” she told Geneva-based journalists via videolink.

Russia has denied bombing the theatre, and the Kremlin has repeatedly said that Russian forces have not targeted civilians since invading Ukraine on February 24.

Still, the emerging picture of gruesome casualties could refocus attention on the refusal thus far of countries from the NATO alliance to supply warplanes or fly patrols to protect Ukraine’s airspace, despite repeated pleas from the country’s embattled president.

The scale of devastation in Mariupol, where bodies have laid unburied amid bomb craters and buildings have been hollowed out by relentless attacks, have made information difficult to obtain.

But soon after the attack, the Ukrainian Parliament’s human rights commissioner said that more than 1,300 people had taken cover in the theater, many of them because their homes were destroyed in Russia’s siege. The building had a basement bomb shelter, and some survivors did emerge from the rubble after the attack.

In her remarks to journalists, the UN’s Bogner said that monitors had received more information about mass graves in Mariupol, including one that appeared to hold 200 bodies.

“We have got increasing information on mass graves that are there,” Bogner said from Ukraine, saying some of the evidence came from satellite images.

The UN rights office, which has some 50 staff in the country, has so far counted 1,035 civilian deaths since Russia invaded Ukraine.

But verification difficulties meant that toll included “very few” from Mariupol, which has been under heavy bombardment for weeks, Bogner said.

“The extent of civilian casualties and the destruction of civilian objects strongly suggests that the principles of distinction, of proportionality, the rule on feasible precautions and the prohibition of indiscriminate attacks have been violated,” she said.

NATO nations fear that providing planes, tanks, and a no-fly zone in Ukraine’s airspace could increase the risk of them being drawn into direct conflict with Russia.

The US and the European Union on Friday did announce a move to further squeeze Russia economically: a partnership to reduce Europe’s reliance on Russian energy and slowly dry up the billions of dollars the Kremlin gets from sales of fossil fuels.

Even without a direct conflict between Russian and NATO forces, Europe’s most serious security crisis since World War II has pushed relations towards breaking point.

The Kremlin is bristling at the tightening noose of sanctions around Russia’s economy, currency and business leaders accused of being supportive of President Vladimir Putin. On Friday, his foreign minister, Sergey Lavrov, characterised Western pressure as “a real hybrid war, total war”.

“And the goals are not hidden … they are declared publicly — to destroy, break, annihilate, strangle the Russian economy, and Russia on the whole,” he said. 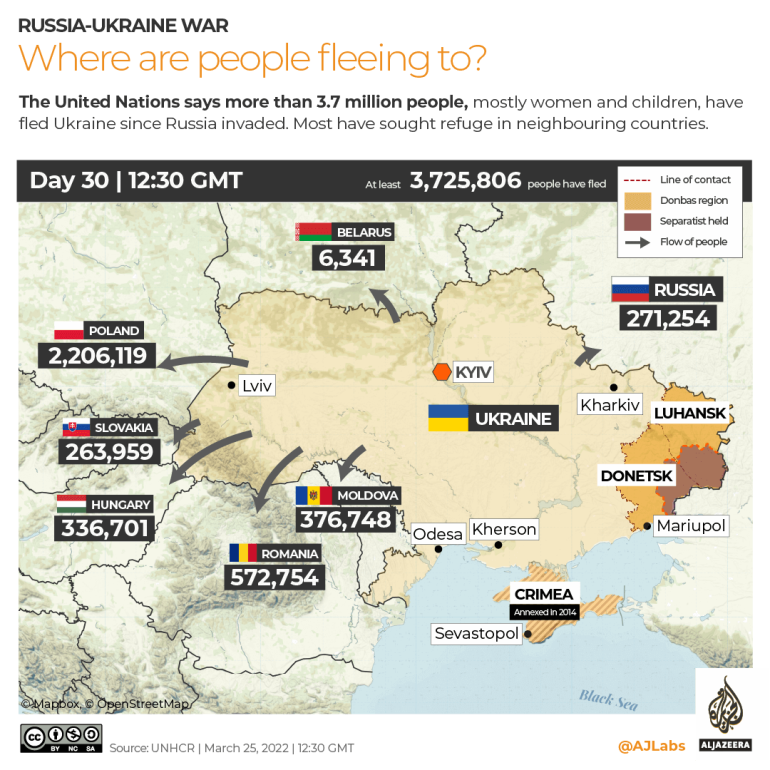