Vinnytsia, Ukraine – When Belarus, Russia’s oldest and staunchest post-Soviet ally, evacuated its embassy from the Ukrainian capital, Kyiv, on Saturday, the ambassador received a humiliating “gift”.

A Ukrainian border guard threw 30 pieces of silver at Belarusian Ambassador Igor Sokol, according to a video shot at an unnamed border checkpoint – a symbolic gesture.

“With hate!” the guard shouted as he threw the bag of coins at Sokol.

For its part, Russia closed down its embassy in Kyiv two days before the invasion began on February 24.

A border guard, on the order of the Head of the #Ukrainian Border Guard Service, gave 30 pieces of silver through #Belarusian Ambassador Igor Sokol to the Chairman of the State Border Committee of #Belarus Anatoly Lappo. pic.twitter.com/YcehIb3yah

The Belarusian step is not just a show of support for Russian President Vladimir Putin from his Belarusian counterpart Alexander Lukashenko. It may signal a game-changing military move.

Ihor Romanenko, a retired lieutenant-general and former deputy chief of Ukraine’s General Staff, told Al Jazeera Belarus may join the fray on Moscow’s side – and send between 10 and 15 tactical battalions of up to 800 men each to help the stalled Russian army which has been taking heavy losses and barely moving in recent days.

“Judging by how things unfold, the possibility is high,” Romanenko said.

He said this would follow weeks of purges within the Belarusian military after many servicemen and officers refused to fight Ukrainians.

The Belarusians will only move in alongside Russian forces – and only after Moscow completes deploying reserves such as paratroopers from the Pacific fleet that are being hastily flown to western Russia and Belarus, he said.

“The most likely date is when Putin gathers his reserves, will take a part of them to the north [of Ukraine that borders Belarus], to the northeast,” Romanenko said.

“The capital is the principal goal.

“Understandably, Putin thinks that if the capital is taken, the matter [of victory over Ukraine] will be solved at once and in principle.”

On Tuesday, a top intelligence official in Kyiv predicted Belarus may send three waves of servicemen to Ukraine – of about 5,000 each – to help the Russian military,

“A chance of invasion from Belarus is pretty high,” Major General Viktor Yagun of the Ukrainian Security Service said in televised remarks.

He claimed that Lukashenko “no longer” commands his army as Belarusian top brass are “managed by Russia”, adding Belarusians may target the western Volyn region that serves as a main supply route for Western military aid. 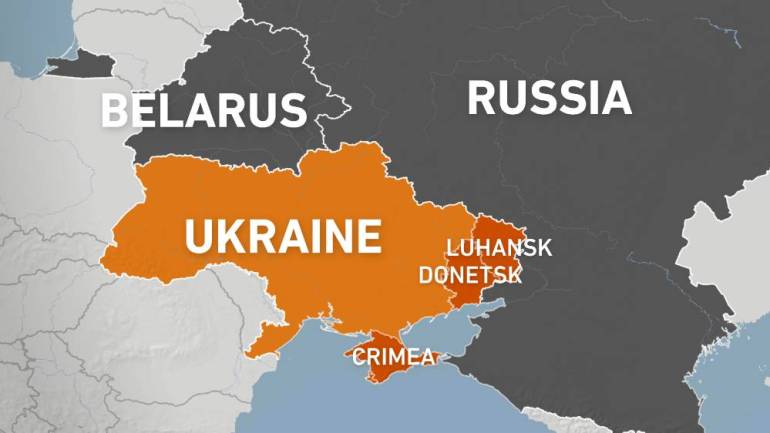 Another expert also thinks Lukashenko’s forces may spearhead the Russian advance on western Ukrainian regions that have so far been relatively untouched by the hostilities.

“Possibly, the invasion will be more full-scale,” Nikolay Mitrokhin, a Russia researcher with Bremen University in Germany, told Al Jazeera.

He said the Belarusians may help Russia advance towards three major western Ukrainian cities to dissect Ukraine and to cut it off from the sources of Western military aid.

“The invasion may go to Lviv, Kovel, Lutsk so that it could cut Ukraine from its western borders or, at least, get Ukrainian reserves entangled in the war and to test how [battle-ready] they are,” he said.

Lukashenko allowed Russia to use its territory to invade Ukraine and amended his ex-Soviet nation’s constitution to allow the deployment of Russian nuclear weapons in Belarus.

But when the invasion began, he said he was not going to back Putin militarily.

“We are not going to get dragged into the war, no one is asking us to do that,” the 67-year-old former collective farm chairman told Belarusian top brass in February.

However, on March 15, he threatened to “respond strongly” after claiming a cruise missile had been intercepted and destroyed over Belarus.

“Why is it done? To get us excited, to get us to respond. But we are not that simple. If we respond, we will respond strongly. So that everyone can feel it. But so far, we’re being patient,” Lukashenko said – but fell short of specifying who launched the missile.

Belarus has beefed up its forces along the Ukrainian border, although its top commander claimed it had nothing to do with the possibility of their participation in the war.

“The movement of troops is in no way connected with the preparation, let alone participation of the Belarusian military in [Russia’s] special military operation in Ukraine,” Deputy Defence Minister Viktor Gulevich said on March 12.

Ukraine’s top security official said on Sunday that Lukashenko may, after all, enter the war – and issued a warning to his servicemen.

“If a single Belarusian soldier crosses the border with Ukraine, he will be destroyed,” Security Council head Oleksiy Danilov told Ukrainian media.

“The Russian president is forcing Alexander Lukashenko to start an invasion of the Belarusian army, but the latter understands that it would crush Belarus,” he said.

In 2020, the Kremlin helped Lukashenko survive the largest popular protests in his nation’s post-Soviet history that followed a disputed presidential election that handed Lukashenko victory.

The West did not recognise the results, lambasted Lukashenko for a violent crackdown on protests and imposed tough sanctions that made Minsk more dependent on Moscow’s financial and political backing.

Tens of thousands of Belarusians who fled Lukashenko’s crackdown on protests settled in Ukraine.

Meanwhile, the Kremlin dispatched teams of state-approved journalists and spin doctors to help “improve” the coverage of the protests on Belarusian television.

Average Ukrainians have long been aware of Lukashenko’s pro-Russian sympathies and the pressure Minsk has been under.

“So, the response will be like it’s the belated news report everyone is ready for,” he said.

But militarily, it will be a problem – whether Belarusians only concentrate on helping Russians take over Kyiv, or help them subjugate western Ukraine.

“Either way, it is going to be problematic,” said Romanenko, the retired lieutenant-general.

With just 48,000 servicemen, the Belarusian army is small in comparison with those of Russia and Ukraine and has far less combat experience.

But it has often held drills with Russians, has a similar post-Soviet structure, arms and other equipment as Ukraine effectively retrained tens of thousands of its servicemen in accordance with NATO standards and received hefty shipments of Western arms.