Odesa, Ukraine – On a sandy beach in Odesa, Ukraine’s third-largest city and biggest port, dozens of men fill bags with sand and pile them onto a van to be transferred to the front lines for the urban battle they fear is coming soon.

Long stretches of the shoreline, meanwhile, have been laid with landmines to delay any beach landing amid reports that a large Russian amphibious fleet is now approaching the city on the Black Sea coast from the Russian-annexed Crimean Peninsula.

After capturing the port city of Kherson further east on March 2, Russian forces advancing west are believed to be closing in on Odesa by land and sea – and the feeling is it is just a matter of time before an attack takes place.

Situated 300km (186 miles) west of Crimea, Odesa is seen as a strategic asset by both Ukraine and Russia – and its fall would have significant repercussions.

Taking it would effectively cut the rest of the country off from the Black Sea and leave it landlocked. 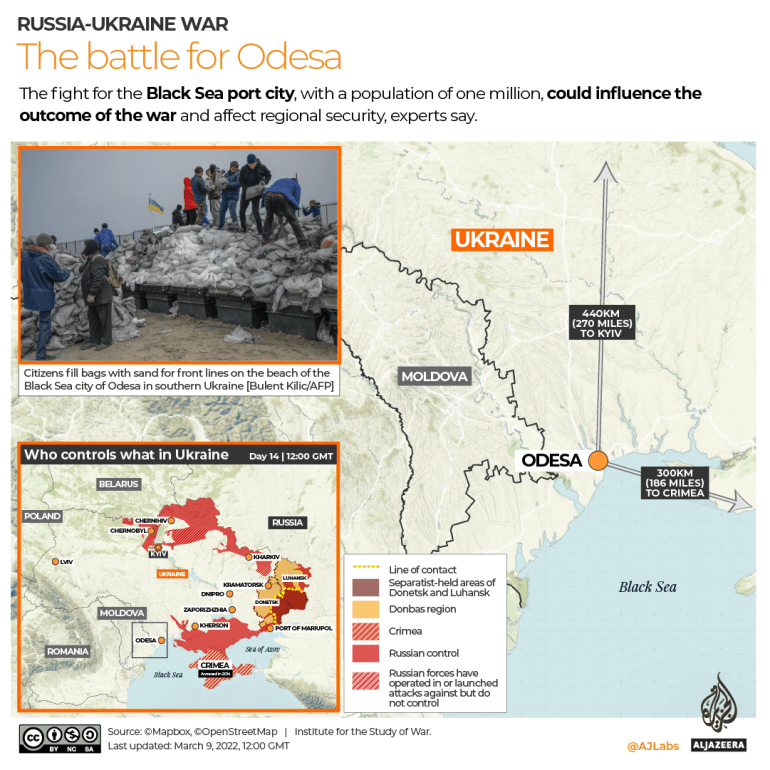 Earlier this month, President Volodymyr Zelenskyy warned that Russia was preparing to bombard the city and called on all Ukrainians to join the war effort.

A tall, long-haired opera singer, Kharlamov said he believed this was going to be a long war despite the ongoing negotiations between Russian and Ukrainian officials and complained that his country has been left to fight alone.

“They are not closing the sky. They are not taking away Russia’s ability to bomb our peaceful cities, and annihilate women, children and the elderly,” he said, echoing Zelenskyy’s insistent demands to Western countries to impose a no-fly zone over Ukraine.

“They are not protecting the ‘humanitarian corridors’ from Mariupol,” continued Kharlamov, referring to the besieged southern city where several evacuation attempts have failed. “They don’t want to help us right now. They promised weapons, more active involvement in the war, fighter jets. Now the US is refusing and [US President Joe] Biden hasn’t delivered.”

‘Under threat from several fronts’

If Odesa falls into Russian hands, it will inflict a serious blow to Ukraine’s war effort. Thus, the city has been frantically building its defences.

Civic organisers say they have so far filled more than 400,000 sandbags. The Ukrainian military, meanwhile, established defensive positions across the city, imposed a curfew and set up roadblocks at all entrances to the city of one million people. The ports have been closed to commercial shipping, while the evacuation of civilians is ongoing.

Earlier this week, the United Kingdom’s defence ministry said Russian naval forces had established a distant blockade of the Black Sea coast, effectively isolating Ukraine from international maritime trade. Some 70 percent of all Ukrainian imports and exports are in the form of sea cargo – and Odesa handles about 65 percent of that.

“Odesa is under threat from several fronts,” Al Jazeera’s Hoda Abdel-Hamid, reporting from the city, said. “The Russian army is trying to advance towards the city from the south, while Russian warships are trying to approach the coast but that won’t be so easy because this city is heavily fortified.”

Inside Odesa, air raid sirens go off day and night but the city has not been directly hit. Capturing the city of about 1 million people would also have a particular symbolic significance, given the significant place the city holds in Russian culture and history.

Founded in 1794 by Russian Empress Catherine the Great, Odesa became a key seaport and a cosmopolitan urban centre, home not only to Russians and Ukrainians, but also to Armenian, Bulgarian, Greek, Jewish and other communities. With its ornate architecture designed by Italian artists and rich cultural life, the city turned into one of the symbols of Russia’s imperial prestige and power, embracing its Russian identity ever since.

But with an assault looming, and the sandbags assembled at the beaches now surrounding cultural buildings, those voices have gone all but silent. The city that was saved by the Soviets during World War II is now getting ready to defend itself from its former protectors.

“We are talking about saving the heritage,” Kiril Lipatov, head of the Odesa National Art Museum, told Al Jazeera.

“Ukrainian, European, Russian – it doesn’t matter. We are saving art. The museum in Kharkiv was bombed and sadly the collection there was mostly lost,” Lipatov said, referring to the destruction of cultural institutions in Ukraine’s second-largest and predominantly Russian-speaking city.

“There is something that’s been bothering me a lot. Ukrainian museums have to protect masterpieces of Russian art from the Russian aggression. It is a paradox. We want the world to know about that.”