In Slovakia, leaflets have been handed out to Ukrainians at the border, informing them of their rights in the country.

On the Polish border, large billboards outside a hall temporarily accommodating people read: “Poland Will Help You!”

There is an abundance of solidarity from civil society and states and as many observers have noted, the welcome is almost unrecognisable compared with similar moments over the past 10 years, when refugees from Middle Eastern, Asian and African countries fleeing conflict have sought shelter in Europe.

And aid workers say that working to solve the Ukraine refugee crisis feels easier now with the support of governments.

“The situation is very different [now],” Marta Górczyńska, a human rights lawyer based in Warsaw, told Al Jazeera, referring to the refugee crisis of late 2021 on the Belarus-Poland border when thousands of people from nations such as Iraq tried to enter Europe.

Working on the Belarusian border, “you had to deal with the hostility from the [Polish] authorities, harassing and intimidating you, telling you that actually it’s not legal to help people who are crossing the border from Belarus to Poland”, said Górczyńska.

“There was a state of emergency introduced and a ban of entry to the border area, which meant that no humanitarian organisations, human rights organisations, or even journalists were allowed to enter,” she said.

“[Now], the Polish authorities [are] welcoming refugees fleeing Ukraine with open arms and providing them with assistance.”

She noted that NGOs working at the Ukraine border were also active on the Belarus border, but now enjoy a different reception from authorities.

“These are the same people doing the same job, providing assistance to people fleeing their countries because of war, persecution, or violence – and receiving very different treatment from the authorities for doing the same job.

“It’s an amazing outcome of such cooperation [between civil society and governments] and you think it could be the same at the Belarusian border, if only the government allowed us to help.” 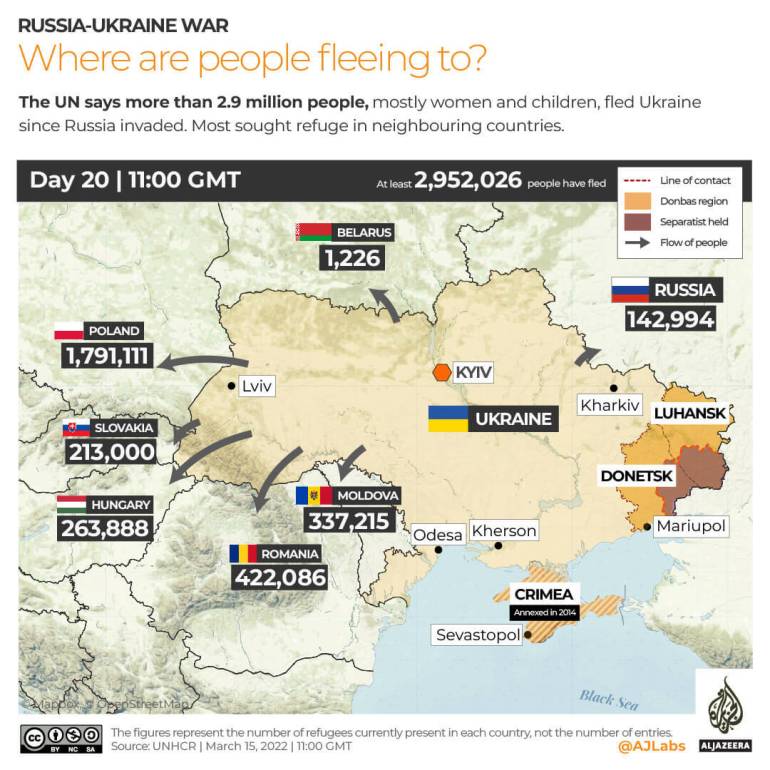 While Polish authorities allow aid to be freely distributed to refugees crossing from Ukraine, fines are still imposed on aid workers and activists who seek to enter the so-called exclusion zone on the Belarusian border to help.

It was reported that on February 23, Ahmed al-Shawafi, 26, from Yemen, died of hypothermia in a Polish forest.

In Greece, the government’s approach towards asylum seekers from the MENA region has been hardening for years, with well-documented pushbacks on its land and sea borders.

But recently, Migration Minister Notis Mitarachi said Ukrainian refugees were “real refugees” – and his country has pledged to take in thousands.

Similarly, Hungary’s notoriously anti-immigration, populist leader Viktor Orban has supported hosting Ukrainian refugees, recently saying “we are able to tell the difference between who is a migrant and who is a refugee”.

Apostolos Veizis, head of the Greek charity INTERSOS, told Al Jazeera: “For me, these are not refugee crises, these are policy-made crises or management crises.”

He noted that outbursts of Greek solidarity, seen in 2015 and 2016, were cracked down upon.

“The Greek government started by criminalising gradually individuals, organisations and refugees and migrants themselves,” he said.

Over the years, Greek authorities have suggested that some NGOs in Greece were involved in people smuggling and even taken aid workers to court.

But as the Ukraine refugee crisis grows, Veizis said Greece has sought the help of NGOs.

“They’ve been organising meetings with the NGO and other civil entities,” he said, “while a few months ago it was the same government and the same European Union who were saying that we’re taking over control from NGOs … [and] we’re taking control of the migration cause.”

‘Nothing has changed at the Belarusian border’

Sonia Nandzik, co-founder of ReFOCUS Media Labs, which runs a media training lab for asylum seekers on the Greek island of Lesbos, has also been present at the Polish-Belarusian border.

She said the difference in attitudes between authorities at the Belarus and Ukraine borders was startling.

Nandzik said the process of helping someone crossing the Ukrainian border was far simpler compared with the Belarusian border, which is highly securitised.

“[Here] if you’re just saying you’re passing by to pick someone up, they say, ‘OK, no problem. Better hurry up so they don’t wait for you and they’re not freezing,’. They’re extremely polite,” she said.

Natalie Gruber, founder of Josoor, an NGO which supports survivors of pushbacks and other refugees in Turkey, has worked with displaced people across Europe, but along with her organisation is the subject of two criminal cases in Greece for espionage, facilitation of illegal entry, violating state secrets and forming a criminal organisation.

Last year, they were accused of paying for fake testimonies of human rights violations.

“Now, apparently you can host Ukrainians in your place while they are on the move. If they were not Ukrainians but any other refugees, you would be at high risk of being persecuted for facilitation of illegal stay,” Gruber said.

“It Is not surprising to anyone working in this field … It’s a relief to see it because this is what we’ve been saying all this time. I’m happy that this whole hypocrisy is out so openly that you can’t deny it any more.”