At least four people have been killed and 94 injured after a powerful earthquake hit northeastern Japan, shaking buildings some 275 kilometres (170 miles) away in Tokyo and leaving hundreds of thousands without power including in the capital.

The 7.4 magnitude earthquake struck off the coast of the Fukushima region at a depth of 60km just before midnight on Wednesday.

Prime Minister Fumio Kishida said four people had died and that the government would be on high alert for the possibility of further strong tremors over the next two to three days.The Fire and Disaster Management Agency said earlier on Thursday that at least 94 people had been injured, including four seriously.

An earlier tsunami warning for the northeast coast was lifted and power had been fully restored to the capital by the early hours of Thursday although people elsewhere remained without power. Transport links to the northeast also remained disrupted, with the Shinkansen bullet train service indefinitely suspended and at least one major highway to the region closed for safety checks.

The Fukushima region was devastated by one of the world’s most powerful earthquakes 11 years ago, and the tsunami it generated destroyed the nuclear plant at Fukushima triggering a meltdown. 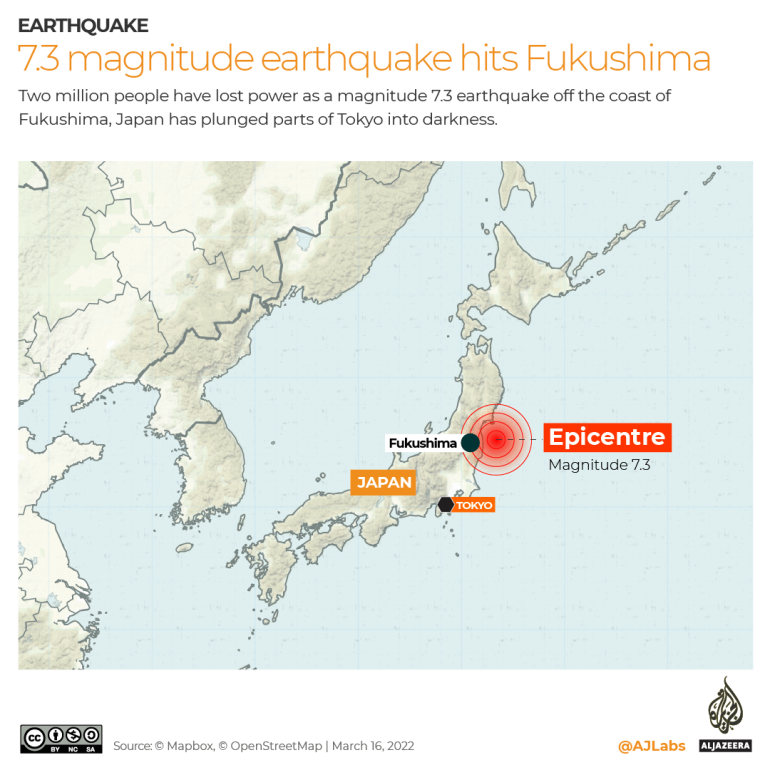 Authorities earlier said a fire alarm had been triggered at a turbine building at the crippled Fukushima plant.

Separately, a Shinkansen bullet train derailed with some 100 people on board, although there were no reports of injuries.

Photographs following the quake, initially measured at a magnitude of 7.3, showed Tokyo’s usually buzzing cityscapes plunged into darkness, with police officers in an eerie red glow trying to direct traffic.

In the northeast, social media showed roads buckled by the quake and goods thrown form supermarket shelves onto the floor beneath collapsed ceilings.

Video footage on social media showed a train in the capital Tokyo rocking violently and rattling gaming machines at an arcade in Fukushima.

Utility Tokyo Electric Power Company (TEPCO) said that about 2 million households lost power on Wednesday after the quake, including 700,000 in the capital. Tohoku Electric Power, another utility provider, said about 38,500 homes were still without power as of 7.40am local time Thursday.

Japan sits on the Pacific “Ring of Fire”, an arc of intense seismic activity that stretches through Southeast Asia and across the Pacific basin.

The country is regularly hit by earthquakes, and has strict construction regulations intended to ensure buildings can withstand strong tremors, but it remains haunted by the memory of the 2011 disaster.

A minute’s silence was held last Friday, the anniversary of the quake and tsunami, to remember the some 18,500 people left dead or missing.