For years, Ukraine has aspired to join NATO, a move that would significantly boost its military in the face of Russian aggression, but the chances of membership remain slim even as the war devastates the former Soviet country.

Russia refuses Western allegations that it wants to influence Ukraine, and claims its main desire is for Ukraine to be neutral, a buffer state, and out of NATO.

But on February 24, Russia invaded Ukraine after months of tensions – and the bloody conflict has now made the scenario of a neutral Ukraine more conceivable.

Since 2019, joining NATO has been enshrined in the Ukrainian constitution. Russia has demanded that Ukraine renounce this and declare itself neutral.

After two weeks of the war, it appears Ukraine is no longer insisting on NATO membership and it has not ruled out talks about the country’s possible neutrality in negotiations with Russia.

In international law, neutrality means the obligation of a state, brought about by unilateral declaration or coercion, not to interfere in military conflicts of third states.

Examples of neutrality exist, such as Switzerland, Ireland, Sweden, Finland and Austria, with the four latter being post-neutral states since they are part of the European Union.

However, while the EU has a common foreign, security and defence policy, opt-out clauses are available to avoid an overall deadlock. 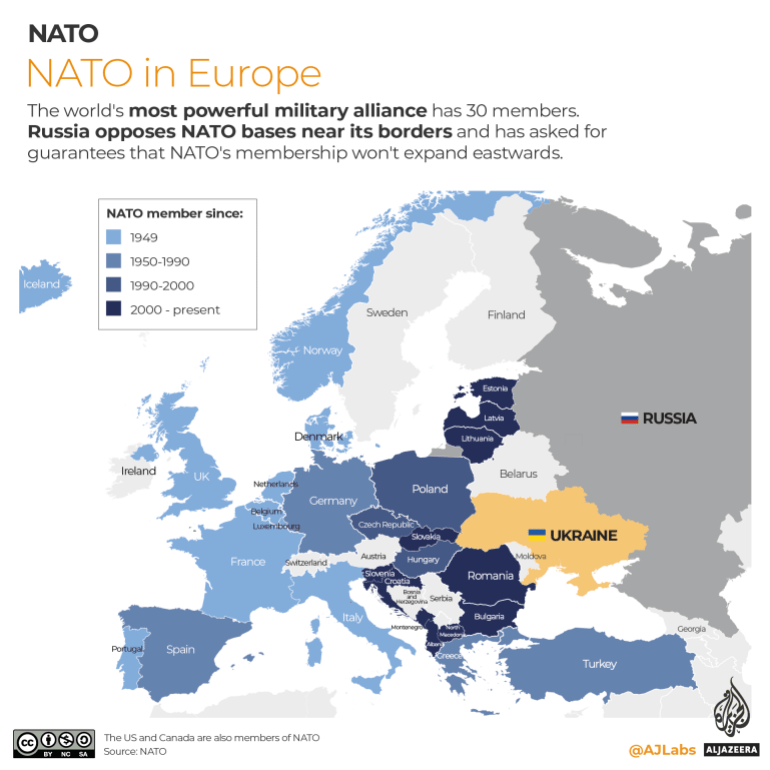 According to Fotios Moustakis, associate professor in strategic studies at the University of Plymouth, Russia’s insistence that it does not want to influence Ukraine is hardly believable.

“The truth of the matter is that since 2008 and following the Bucharest NATO Summit Declaration, Russia has made it clear to the West that Ukraine will not be allowed to escape Russian orbit and influence,” he told Al Jazeera.

“Russia openly and consistently declared that the Bucharest NATO Summit Declaration in April 2008, which confirmed that Georgia and Ukraine will become NATO members, was a colossal strategic mistake and posed a direct threat to the core strategic interests of Russia.”

But the invasion of Ukraine is “not about re-establishing a Soviet Empire 2.0”, he added.

“It is about securing what is considered vital to Russian strategic interests. If Russian interests are not taken into consideration by the West, Putin will wreck Ukraine, which he is currently in the process of doing.

“Russia does not have the desire or capacity to fully occupy the country. Neutrality is a panacea to solving the current crisis, and Finland is the model that provides a reasonable path ahead,” Moustakis said.

However, questions remain about what neutrality would mean to Ukraine, Katharine AM Wright, senior lecturer in international politics at Newcastle University, told Al Jazeera.

“For any conditions made by [Ukraine President Volodymyr] Zelenskyy to be realistic, they will need to have the buy-in of Ukrainians who have lived in the shadow of an increasingly aggressive neighbour for a long time and have now seen their worst fears come to fruition,” she said.

“A neutral Ukraine would no longer be a NATO partner, although other neutral states, notably Finland and Sweden, are NATO partners. Such a pathway to NATO membership, however unlikely it is to be fulfilled, will be a red line for Putin who views Ukraine differently.

“For Putin, Ukraine is part of an imagined ‘Russian World’ or community built on the markers of the Russian language, culture and a ‘common glorious past’ in a way Finland and Sweden are not, and this has been a driving motivation behind the decision to invade Ukraine,” Wright said.

The most pressing issue now is whether neutrality could deliver peace.

“A neutral Ukraine would need to seek security ties outside of NATO to prevent a recurrence of an invasion, given Russia is the aggressor this would need to come from them, but Ukraine would likely look to other members of the UN Security Council [China, France, UK, US] to help uphold this,” Wright noted.

Overall, experts seem to agree that neutrality is the way forward.

“It would go a long way towards solving it. In his ideal world, Putin may have dreamed of a Ukraine united with Russia in a single overarching state form, but events of the last weeks have shown that is a highly unlikely outcome,” said Graham Gill, professor emeritus at the University of Sydney.

He told Al Jazeera that “while there is still a substantial pro-Russian sentiment in some parts of the country, the invasion has soured many Ukrainians’ views of the Russians”.

He added: “Putin will hopefully realise unification is not on the cards. At least in the short term, a Ukrainian government that enjoys wide authority in the country is unlikely to be pro-Russian in outlook. Neutrality may then appear more attractive.”

At the start of the crisis, Putin has demanded that NATO guarantee non-membership for Ukraine and sought the withdrawal of NATO forces away from the Russian border.

“These were rejected out of hand by NATO and US leaders,” Gill said. “Had those negotiations been undertaken realistically, the conflict may have been avoided. Unfortunately, I doubt either NATO or the US will draw that conclusion because to do so would be to admit some responsibility for the conflict.”

Wright concurred, saying that a neutral Ukraine is “likely to be key to a peaceful resolution of the current conflict and to bring an end to the Russian invasion”.

However, the resolution of this conflict will rely on significant concessions on both sides, and Putin as the aggressor will want to withdraw his forces without losing face.

The idea of neutrality is likely to be a central part of any negotiations.

“The key message of the war in Ukraine is that every state should rely purely on its own forces for deterrence … In order to maintain peace and stability, it is sometimes necessary to surrender some of your ideals,” Moustakis said.

He added that in the end, “neutrality is not only realistic but also reasonable and pragmatic”.