Kyiv, Ukraine – Russian forces continued to surround Ukraine’s capital, Kyiv, on Friday as civilians gave accounts of soldiers forcing people from homes and shooting at those fleeing cities nearby.

Svitlana Dekhtiar from Bucha, about 60km (25 miles) northwest of Kyiv, said she and her family, along with other residents of her apartment complex, were assured that they would not be harmed after Russian troops occupied the city.

“The Russians told us not to be afraid, they will not hurt us,” Dekhtiar told Al Jazeera.

“But they create conditions that are very frightening. We see that people who try to move out of the city by cars carrying their things are being shot at. We could see the front seat [of one vehicle] covered in blood.”

Dekhtiar said her family was forced to flee and left everything behind after Russian troops shot at her flat and then took over the building they had been hiding in for days with little water and food.

“They said nothing to people whose apartments they occupy. To one person they said ‘just go to the basement’,” she recalled from a makeshift shelter in Kyiv.

“One neighbour wanted to come to his flat to take some clothes before evacuating but they did not allow him. He left with only his documents.”

The planned mass evacuation of civilians from Bucha earlier this week was cancelled after the Russian military blocked dozens of buses, officials from the Bucha City Council said. It was “impossible to negotiate” with the “occupants”, the council said.

In some instances, Russian soldiers threw smoke grenades into basements to force people out, residents said. One woman, who asked to remain anonymous, told Al Jazeera she witnessed the killing of an 11-year-old boy as Russian forces seized the city. 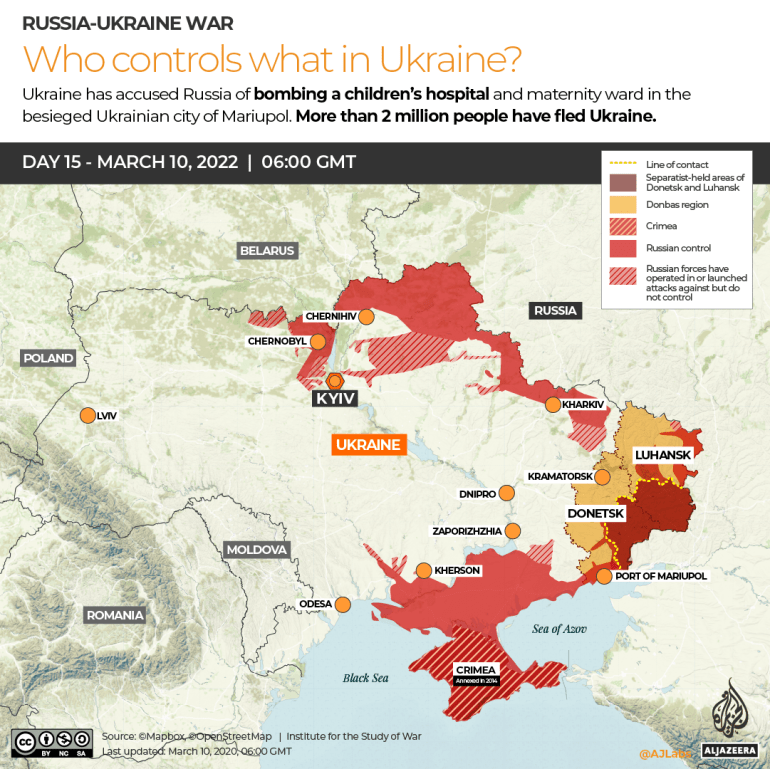 The battle for Bucha resulted in heavy casualties on both sides, residents said.

“In the streets of Bucha, there is a large column of destroyed Russian tanks,” said a man who identified himself as Volodymyr. “But close to our house there is a column of Ukrainian tanks also destroyed.”

“I asked them, ‘Guys what are you doing here? Everyone here is speaking Russian. Who are you trying to liberate?’ Many here are from Donbas, we came in 2014. They gestured to me that they had no idea,” he said.

Many Ukrainians said they believe Russian President Vladimir Putin is aiming to seize Maidan Square in the centre of Kyiv – a symbol of the revolution eight years ago that brought Ukraine closer to Europe.