The United States has announced plans to expel 12 Russian diplomats from Moscow’s mission to the United Nations in New York, accusing the officials of engaging in “espionage activities”.

In a statement on Monday, the US mission to the UN said it had started the process of expelling the diplomats – whom it described as “intelligence operatives” – for “engaging in espionage activities that are adverse to our national security”.

“We are taking this action in accordance with the UN Headquarters Agreement. This action has been in development for several months,” the statement read.

The move comes amid widespread international condemnation of Russia over its invasion of Ukraine, which since last Thursday has left more than 100 Ukrainian civilians dead and forced half a million others to flee the country, according to the UN.

Russia’s UN Ambassador Vassily Nebenzia told reporters the diplomats had been asked to leave by March 7.

Nebenzia then raised the issue at the start of a UN Security Council meeting on the humanitarian situation in Ukraine, describing the US move as “hostile” and a violation of its commitments as host of the UN headquarters in New York City.

US Deputy UN Ambassador Richard Mills responded: “Those diplomats that have been asked to leave the United States were engaged in activities that were not in accordance with their responsibilities and obligations as diplomats.”

US President Joe Biden’s administration has imposed a slew of sanctions against Russia in response to the country’s invasion of Ukraine, which began last Thursday.

The US and its allies, including the European Union, last week also announced plans to sanction Russian President Vladimir Putin and Foreign Minister Sergey Lavrov over the country’s attack on its neighbour.

The number of people fleeing the invasion has surged to more than half a million, the UN High Commissioner for Refugees Filippo Grandi said earlier on Monday, while at least 102 civilians have been killed since Russian troops entered the country. 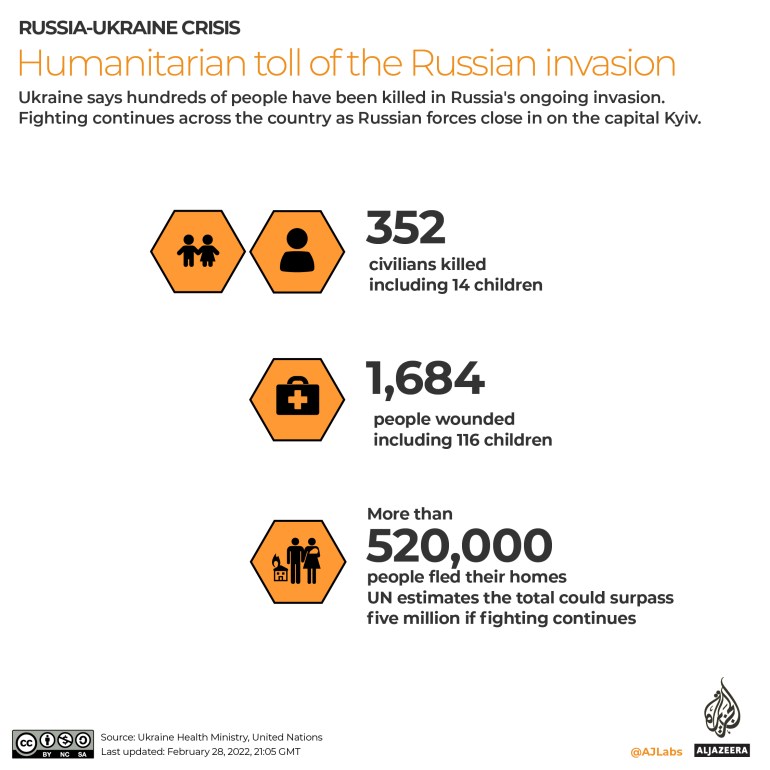 Long lines of cars and buses were backed up at checkpoints at the borders of Poland, Hungary, Slovakia, Romania and Moldova, as civilians continued to flee Russia’s assault. Others crossed the borders on foot, dragging their possessions.

The Ukrainian health ministry said the civilian death toll has now reached 352, including 14 children, while 1,684 others – including 116 children – have been wounded in the Russian assault.

The first round of talks aimed at ending the fighting between Moscow and Kyiv concluded on Monday with no immediate agreements.

The talks were held near the Belarus-Ukraine border as Russian troops continued their attack on Ukrainian cities – including the second-largest, Kharkiv – on the fifth day of Russia’s invasion.