As the Russian offensive enters its 337th day, we track where the fighting is happening and how we got here.

Read on for an overview of the situation in infographics and maps.

Kyiv hailed Germany and the United States after they promised to send battle tanks to Ukraine, following weeks of diplomatic deadlock. 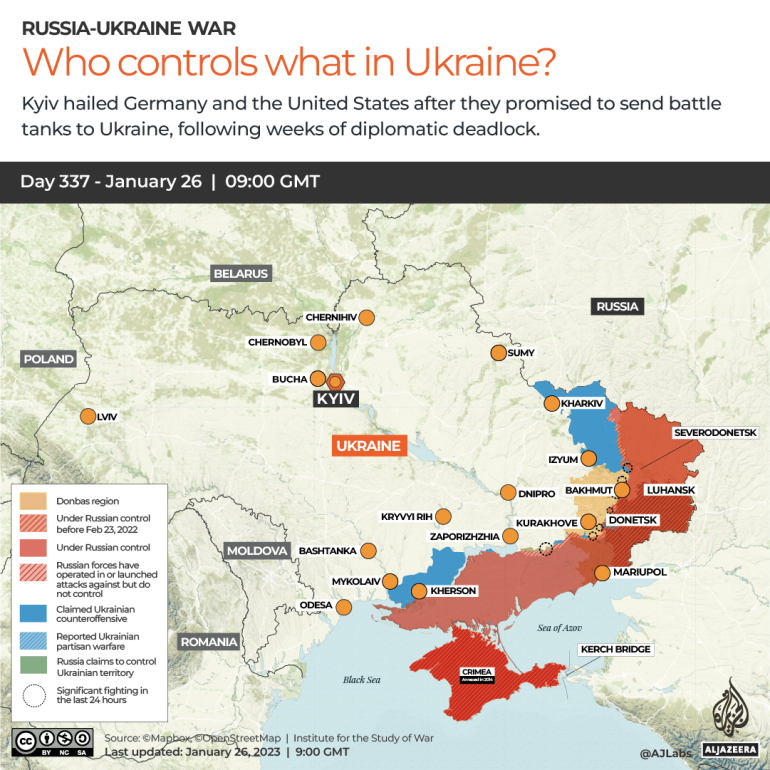 Who controls what in eastern Ukraine?

Ukraine acknowledged its forces have withdrawn from Soledar as Russian forces continued limited ground attacks near Kreminna, Bakhmut and the areas around Avdiivka and Donetsk city, the Institute for the Study of War said. 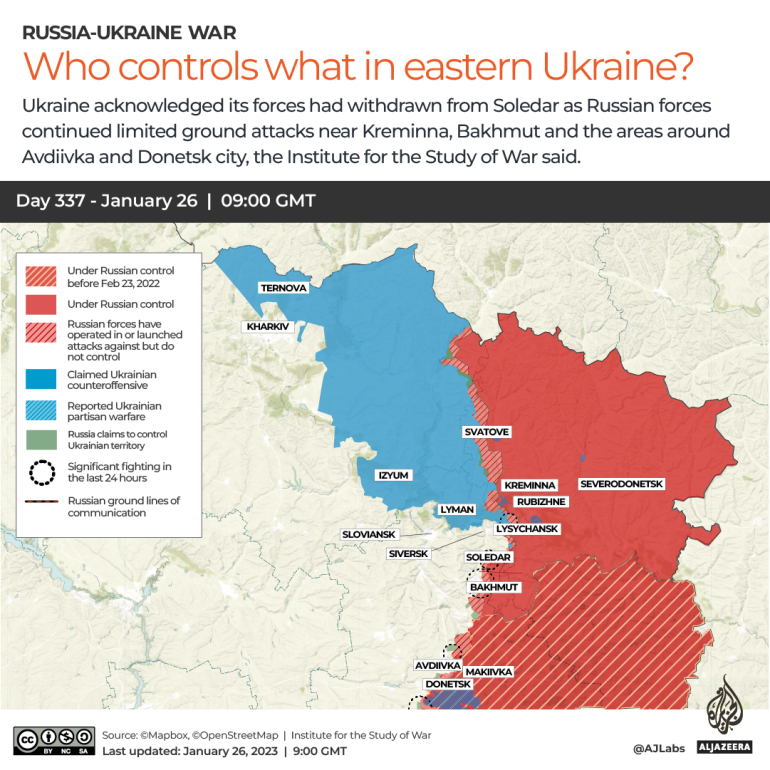 Who controls what in southern Ukraine?

Ukrainian and Russian forces continued to clash across the Dnieper River in the Kherson region. The Institute for the Study of War quoted a Kherson Oblast official as saying that Moscow’s troops struck Kherson city with incendiary munitions. 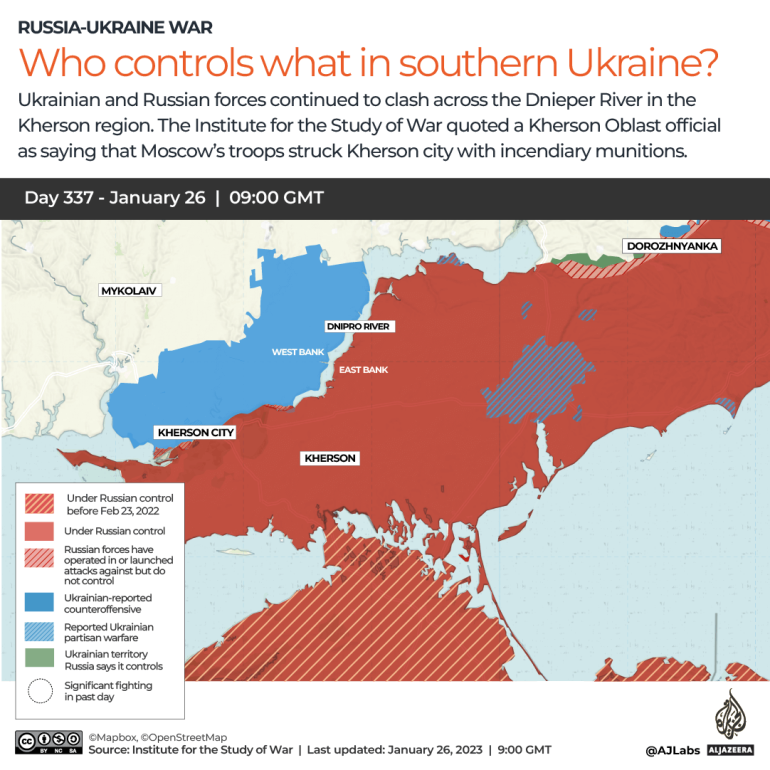 According to the UN refugee agency, there have been 17.9 million border crossings out of Ukraine since the Russian invasion began in February. Many people have sought refuge in neighbouring countries. 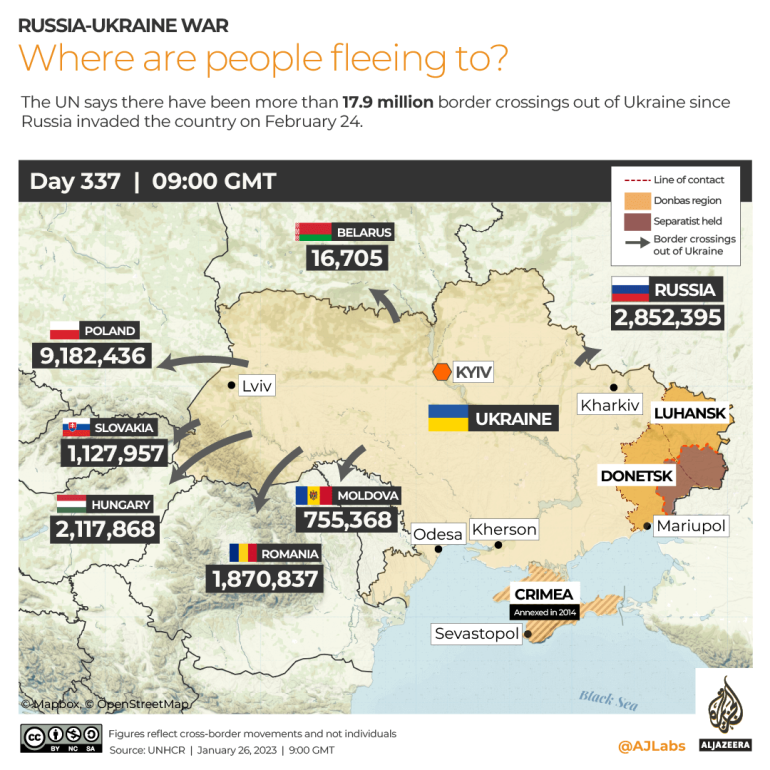 Ukraine and Russia explained in ten maps and charts

Below are ten infographics that break down the history, politics and economics of the Ukraine-Russia crisis.

1. Conflict at a glance

After months of tensions and intense diplomacy, Russian forces invaded Ukraine. Explosions were heard across the country. Kyiv declared martial law, saying Ukraine will defend itself. Below is a summary of the conflict at a glance.

2. History of the USSR

After independence, Ukraine moved to shed its Russian imperial legacy and forge increasingly close ties with the West.

Over the past 30 years, Ukraine has been led by seven presidents. The country has had a rocky path towards democracy with two revolutions, first in 2005 and then in 2014. Both times, protesters rejected Russia’s supremacy and sought a path to join the European Union and NATO.

By comparison, Russia has been led by three presidents, with Putin having been in office for 17 years. In 2021, Putin, the former agent of the Soviet Union’s KGB security services, signed a law that essentially enables him to stay in power until 2036.

Putin has repeatedly claimed that Russians and Ukrainians belong to “one people” and are part of the historical “Russian civilisation” that also includes neighbouring Belarus. Ukrainians reject his claims.

4. How big are Ukraine and Russia?

Ukraine has an estimated population of 44 million – the seventh-largest in Europe. The country comprises 24 regions, known as oblasts. The country’s population has declined since the 1990s with fertility rates among the lowest in the world. As of 2020, Ukraine’s fertility rate was just 1.2. For context, in order for a population to remain stable, an overall total fertility rate of 2.1 is required.

Ukraine is the second-largest country in Europe, after Russia. At 603,550sq km (233,031sq miles), Ukraine is a bit smaller than the US state of Texas, about three times smaller than India, half the size of South Africa and about two and a half times the size of the United Kingdom.

Read more about the military capabilities of Russia and Ukraine here.

Ukraine, too, has a sizeable reserve of oil and gas at 395 million barrels and 349 billion cubic metres, respectively. The country sits at the crossroads between the West and Russia, and plays a key role in delivering Russian gas to European markets.

Read more about the world’s oil and gas pipelines here.

More than one-quarter of the world’s wheat exports come from Russia and Ukraine. Economic sanctions or military action may have a significant effect on the cost of food as importers seek to find alternatives. Russia exported $407bn in products and Ukraine $49bn in 2019.

9. Which countries rely most on Russian oil?

Read more about what a ban on Russian oil means here.

10. Which countries buy the most Russian weapons?