Medyka, Ukraine-Poland border – Warm rays of the morning sun remove the last signs of frost from the cars parked in endless lines along the road.

Medyka – the main border crossing between Poland and Ukraine – is slowly waking up, and so are dozens of men and women who spent the night in parking lots, waiting for their loved ones to arrive.

Since the beginning of Russia’s invasion of Ukraine on February 24, more than 115,000 refugees have crossed into Poland, the Polish Ministry of Internal Affairs said on Saturday. Anyone from Ukraine is allowed entry, even those who do not hold valid passports, Polish officials said.

The United Nations Refugee Agency says more than 120,000 Ukrainian refugees have left the country since Russia invaded Ukraine on Thursday.

But for most Ukrainian refugees, it took days to escape the war.

Helena, 49, from Drohobych in western Ukraine, is sipping tea and eating a sandwich she received from volunteers. She has family in Poznan, Poland, and she knows the arduous journey will soon be over.

But it took her 24 hours to cross the border and arrive to safety. “It was hell,” she told Al Jazeera before she burst into tears.

For Denis, a 30-year-old from Chernivtsi, Ukraine, who works at construction sites in Poland, it was a difficult night as well. He arrived at Medyka on Thursday to meet his wife and children coming from Ukraine. But after a whole night of waiting, they were nowhere in sight.

“They have been at the border for over 24 hours. At the beginning, they wanted to cross on foot but it was hard, so they found a bus. At least it’s not as cold as outside,” he said.

“But for the past five hours or so, they are not letting anyone through. It is unclear why.”

While Denis’s wife and children are on their way to reunite with him, his mother decided to cross back into Ukraine. She did not want to be away from her husband and two other sons, who might soon receive a call for service.

“My father fought in Afghanistan and he knows what a war is like,” Denis said.

“It’s a paradox. But everyone can see what the Russians are doing. They took Crimea, Donbas, now they want Kharkiv.”

Denis told Al Jazeera he might join the fight too, but first wants to make sure his wife and children are safe. In a week or two, he said, if the enemy is closer to his hometown of Chernivtsi, he will have to take up arms.

“If they come closer to our homes, we will have to go back and fight. For so many years, we have worked to build the country that even if some of us leave, others will have to stay. If everyone leaves, who will defend us?” Denis asked.

For the first half of the day on Friday, more people crossed into Ukraine than were seen leaving the border – a puzzling paradox in a time of mass exodus.

Ukrainian refugees also complained about waiting hours to receive the Polish stamp, lack of food available in the passage between Ukraine and Poland, and severe cold in the region.

Amid the border chaos, volunteers handed out water, warm clothes and blankets to the conscripts crossing into Ukraine to join the fight.

The gear will allow women and children – stranded between Poland and Ukraine and still waiting for a chance to get to safety – to survive another freezing day.

Yelena, a 43-year-old refugee herself, is one of the volunteers handing out the items.

She arrived in Poland almost a year ago from Belarus. When she found out that Russia had launched a full-scale invasion against Ukraine, she did not want to stay idle.

“I wanted to join the war. The Polish border guard let me through, but the Ukrainians didn’t. You know why? Because I have a Belarusian passport,” Yelena told Al Jazeera.

“All type of help is needed there: someone has to cook, someone has to take care of the wounded. I even tried to cross a second time, but to no avail.” 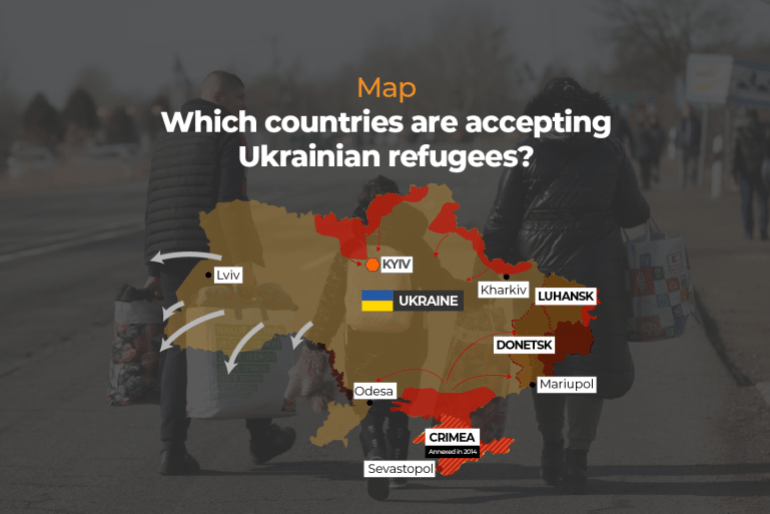 Yelena said she then destroyed her Belarusian passport in protest against the war and joined the Ukrainian and Polish volunteers at the border.

“I feel ashamed for Belarus. Ukraine has to win this war,” she said. “Slava Ukraini [Glory to Ukraine].”

She then passed a blanket and several bottles of water to a young man entering the border crossing towards Ukraine.

Olga is waiting in the same queue. She stands out from the rest of the crowd; her long, fashionable coat with quirky patterns and impeccable hair attracts attention. 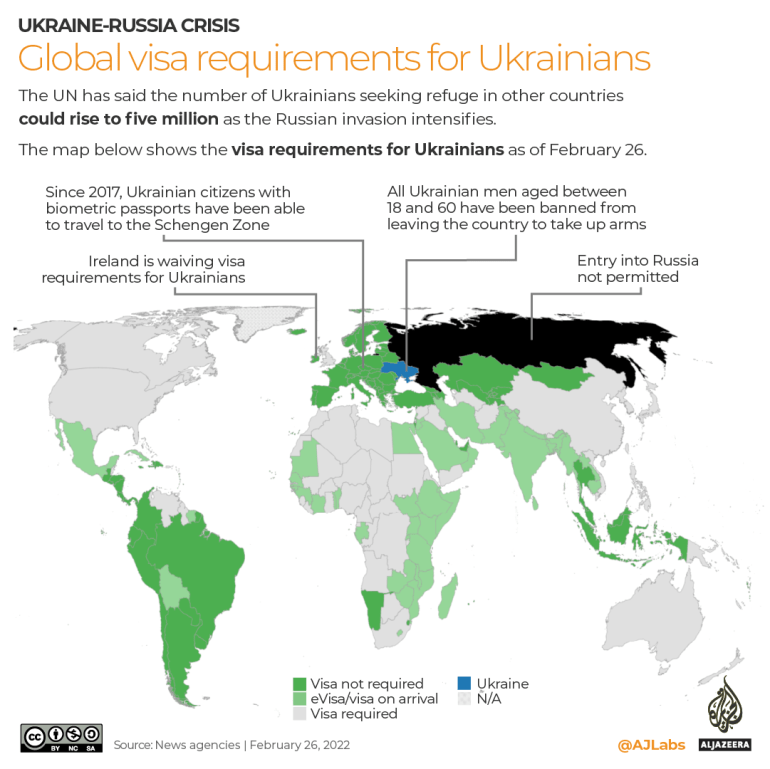 Olga and her boyfriend Sergey were waiting for a flight back to Ukraine at an airport in Vilnius, Lithuania, when they heard about the war unfolding in their homeland.

“We went to Lithuania for a weekend and we got stuck in there. Our flight home was cancelled. For the first few hours, we couldn’t understand what was going on, we couldn’t believe it,” the 33-year-old permanent makeup artist told Al Jazeera.

She now hopes that once back in Ukraine, she will be able to volunteer in a hospital as a nurse. She said she wants to make herself useful.

Her boyfriend Sergey is 38, which means he is in the conscription age. He works as a sound director and has never held a gun.

But if his skills are not enough to support the struggle, he can learn new ones, he says with an air of confidence. “Whatever it takes to help the country.”

It took the couple two days to get from Vilnius to the border. All buses on the route were cancelled, and there were no trains either. In the end, “Lithuanian brothers” drove them straight to Medyka.

While Sergey is afraid of war, he says it never crossed his mind to stay elsewhere in Europe.

“There is one Ukraine and we can’t lose it. It is our homeland and it will never be Russia.”