As attacks continue in Ukraine and Russian forces press their advance on the capital Kyiv, President Volodymyr Zelenskyy has pleaded for help from the international community.

The Western allies also said they would impose restrictions on Russia’s central bank to limit its ability to support the rouble and finance Putin’s war effort.

Below is a list of actions taken against Moscow so far:

The US on Wednesday took aim at Russia’s oil refining sector with new export curbs.

The new round of sanctions announced by the White House ban the export of specific refining technologies, making it harder for Russia to modernise its oil refineries.

Last week Washington and its allies also barred some of Russia’s banks from the SWIFT international payments system, a list officials said was still being finalised with EU partners

It also targeted military end-users, including the Russian defence ministry.

The US has imposed sanctions on 24 Belarusian individuals and entities including “two significant Belarusian state-owned banks, nine defence firms, and seven regime-connected officials and elites”.

The 27-country EU on Wednesday also imposed several packages of sanctions on Russia, including a ban on the export of specific refining technologies to Russia from Europe.

Last week, the group said it was planning close its airspace to Russian aircraft, including the private jets of Russian oligarchs.

For Russian ally Belarus, the EU imposed a ban on imports of products from mineral fuels to tobacco, wood and timber, cement, iron and steel.

The EU also decided to freeze any European assets of Russian President Vladimir Putin and his foreign minister Sergey Lavrov.

Switzerland will adopt all the sanctions that the European Union imposed on Russian people and companies and freeze their assets, the government said in a sharp deviation from the country’s traditional neutrality.

“We are in an extraordinary situation where extraordinary measures could be decided,” President and Foreign Minister Ignazio Cassis told a news conference in Bern on Monday, flanked by the finance, defence and justice ministers.

Only history would tell if such a move could happen again, he said. Swiss neutrality remained intact but “of course we stand on the side of Western values,” he added.

Japan said it will strengthen sanctions against Russia to include financial institutions and military equipment exports, Prime Minister Fumio Kishida said, adding that an impact on his resource-poor nation’s energy supply is unlikely.

Kishida told a news conference on Friday that Tokyo would take aim at Russian financial institutions and individuals with the sanctions, as well as halt exports of military-use goods such as semiconductors.

“Japan must clearly show its position that we will never tolerate any attempt to change the status quo by force,” he said.

The Korean government also decided to promote the additional release of strategic oil reserves for stabilisation of the international energy market and to further review other measures such as the resale of LNG to Europe, the ministry said in a statement on Sunday.

The UK said on Monday it will lock Russia’s Sberbank out of the sterling clearing and slap sanctions on three other banks. Foreign Secretary Liz Truss also said there will be a full asset freeze on Russian lenders within days.

In the 10-point sanctions package released on Friday, the British government said it would impose an asset freeze on major Russian banks, including state-owned VTB, its second-biggest bank, and stop major Russian companies from raising finance in the UK.

Britain will also ban Russia’s flagship airline Aeroflot from landing in the UK, suspend dual export licences to Russia, and ban exports of some high-tech exports and parts of the extractive industry.

To the people of Ukraine: Slava Ukraini.

To the people of Russia: I do not believe this war is in your name.

This crisis, this tragedy, can and must come to an end. Because the world needs a free and sovereign Ukraine. pic.twitter.com/ijbAAb8G67

Canada announced more sanctions against Russia on Friday targeting 62 individuals and entities, including members of the elite and major banks, and cancelled all export permits.

“These sanctions are wide-reaching. They will impose severe costs on complicit Russian elites.”

Canada will prioritise immigration applications for Ukrainians who want to come to Canada, he said.

We’re imposing new and severe sanctions on those responsible for Russia’s brutal, unjustified attack on Ukraine. These sanctions will target banks, financial elites, and members of the Russian Security Council — including the Defence, Finance, and Justice Ministers. pic.twitter.com/JsEodukwcZ

The Czech Republic banned Russian airlines from flying to the central European country and is considering further steps against Russia.

Prime Minister Petr Fiala said on Friday Prague will also speed up its exit from two international banks set up in the Soviet era, while the finance ministry will analyse Russian-owned companies’ access to Czech public funds.

Fiala said memories of the 1968 Soviet-led invasion of Czechoslovakia made the Czech stance tougher than that of some western European partners.

“We are a country which experienced the aggressive policy of Russia, or Soviet Union, and our unique historical experience makes us much more sensitive,” he said.

Taiwan will impose sanctions on Russia, the government said, with the world’s largest contract chipmaker saying it would comply with all export-control rules.

“We very harshly condemn such an act of invasion and will join democratic countries to jointly impose sanctions,” said Premier Su Tseng-chang on Friday, without giving details.

Asked about the sanctions, Taiwan Semiconductor Manufacturing (TSMC), a major Apple supplier and Asia’s most valuable listed company, said it had a robust export control system and would follow the rules. 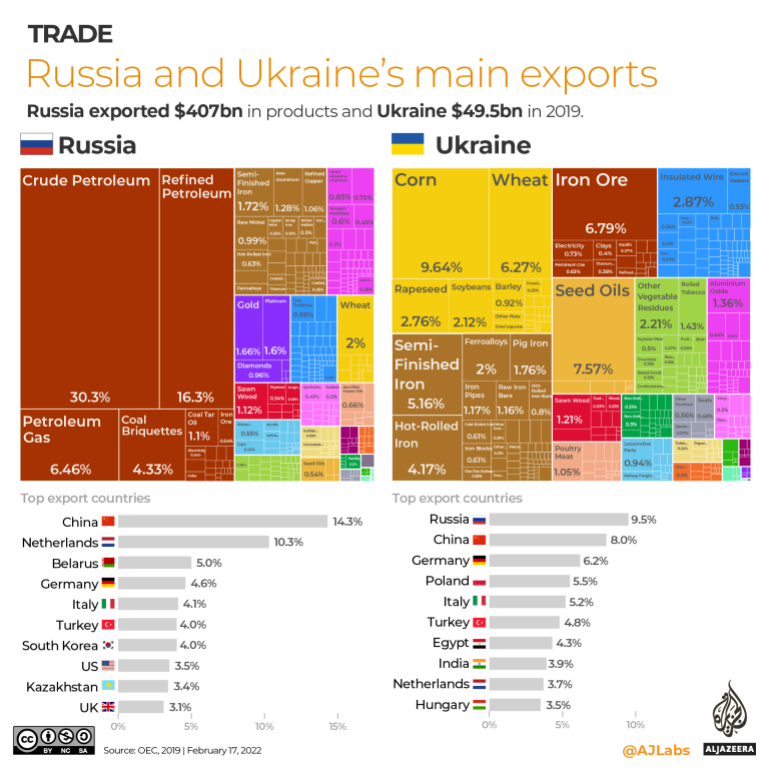 Australia imposed more sanctions on Russia targeting several of its elite citizens and lawmakers, and said it was “unacceptable” that China was easing trade restrictions with Moscow at a time when it invaded Ukraine.

Prime Minister Scott Morrison on Friday said the new sanctions will be placed against “oligarchs whose economic weight is of strategic significance to Moscow”, and more than 300 members of the Russian parliament who voted to authorise sending Russian troops into Ukraine.

Australia is also working with the United States to align sanctions on key Belarusian individuals and entities who helped Russia.

Morrison voiced concerns over the “lack of strong response” from China and criticised Beijing about reports it eased trade curbs with Moscow by allowing imports of wheat from Russia.

“The world is speaking and sending a very clear message to Russia that what they have done is wrong and they will face the condemnation of the world,” Prime Minister Jacinda Ardern said.

Ardern said “an unthinkable number of innocent lives could be lost because of Russia’s decision”.