Ukraine President Volodymyr Zelenskyy said on Wednesday Russia is attacking his country’s “military infrastructure” and border guards. In a brief televised address to the nation, he called for martial law and pledged victory.

Tensions over the Ukraine-Russia crisis have been simmering for months, with diplomatic efforts to resolve the issue showing no sign of progress.

Here is a timeline of some of the key recent events.

Satellite imagery shows a new build-up of Russian troops on the border with Ukraine, and Kyiv says Moscow has mobilised 100,000 soldiers along with tanks and other military hardware.

Russia presents detailed security demands to the West, including that NATO ceases all military activity in Eastern Europe and Ukraine and that the alliance never accept Ukraine or other former Soviet nations as members.

Biden reassures Zelenskyy that the US will “respond decisively” if Russia invades Ukraine.

The two men speak on the phone to discuss preparations for a series of upcoming diplomatic meetings to address the crisis. 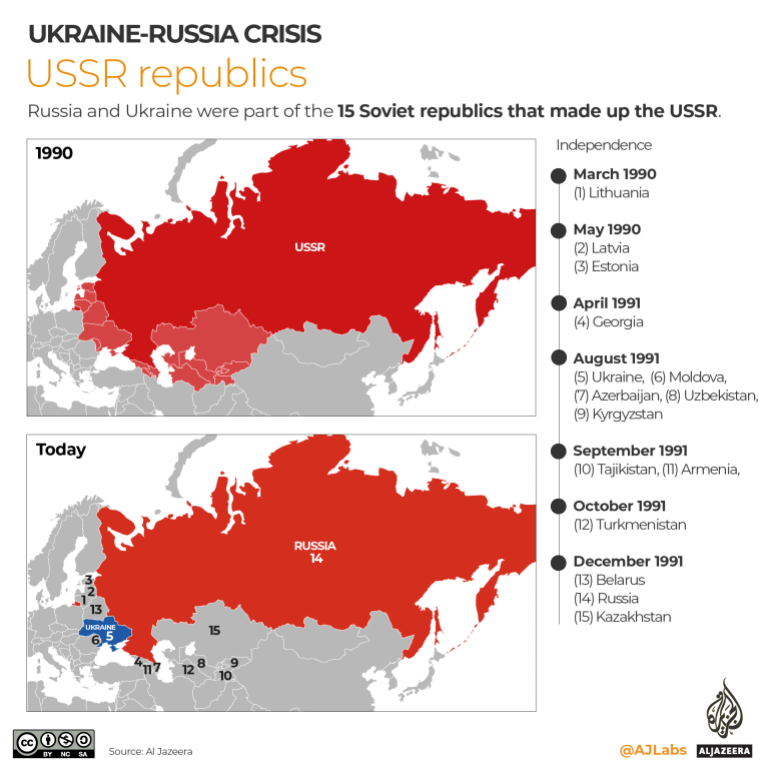 US and Russian officials meet in Geneva for diplomatic talks but differences remain unresolved as Moscow repeats security demands that Washington says it cannot accept.

NATO puts forces on standby and reinforces its military presence in Eastern Europe with more ships and fighter jets. Some Western nations start evacuating non-essential embassy staff from Kyiv. The US puts 8,500 soldiers on alert.

Washington presents a written response to Russia’s security demands, repeating a commitment to NATO’s “open-door” policy while offering a “principled and pragmatic evaluation” of Moscow’s concerns.

Biden warns of a likely Russian invasion in February. China throws its political weight behind Russia and tells the US that Moscow’s “legitimate security concerns” should be “taken seriously”.

Putin says Russia’s main security demands have not been addressed but that Moscow is ready to continue with talks.

Zelenkskyy warns the West to avoid creating “panic” that will negatively affect his country’s economy.

The US and Russia spar over the Ukraine crisis at a special closed session of the UN Security Council.

US Ambassador to the UN Linda Thomas-Greenfield tells the council a Russian invasion of Ukraine would threaten global security.

Russia’s UN envoy Vasily Nebenzya accuses Washington and its allies of drumming up the threat of war despite Moscow’s repeated denials of a planned invasion.

“The discussions about a threat of war is provocative in and of itself. You are almost calling for this. You want it to happen,” Nebenzya says. 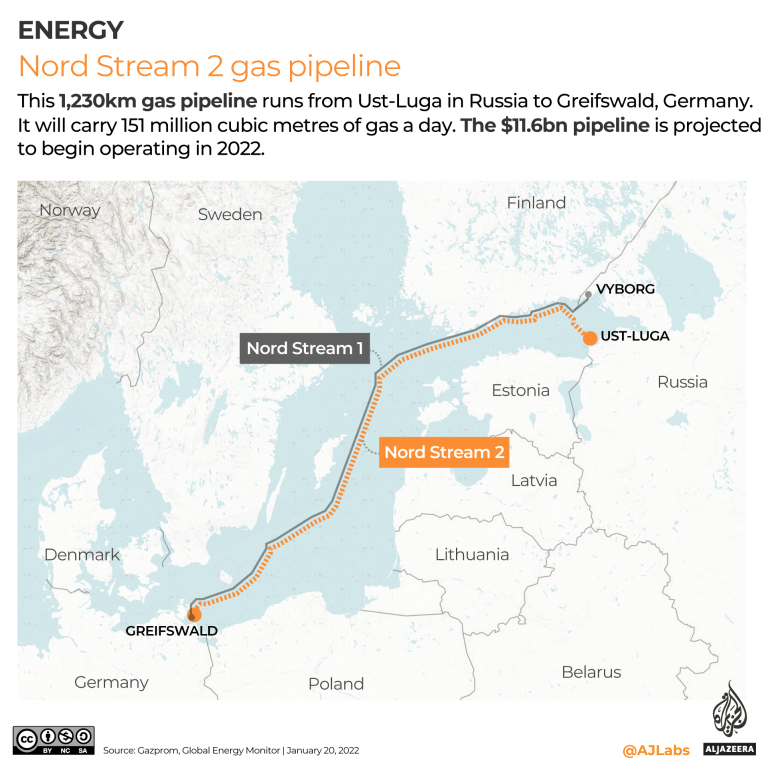 Putin denies planning an invasion and accuses the US of ignoring his country’s security demands.

“It is already clear that fundamental Russian concerns ended up being ignored,” he says.

Russia has established 70 percent of the military build-up it needs to launch a full-scale invasion of Ukraine, according to the US officials cited anonymously in US media.

However, the Kremlin denies that Macron and Putin struck a deal on de-escalating the crisis. Kremlin spokesman Dmitry Peskov says that “in the current situation, Moscow and Paris can’t be reaching any deals”.

In an icy news conference, Lavrov describes the meeting as “a conversation between a mute and a deaf person”.

He adds that the “facts” presented by his team on the crisis “bounced off” their British counterparts.

Truss, who warns of tough Western sanctions if Ukraine was attacked, challenges Lavrov about his assertion that Russia’s build-up of troops and weaponry was not threatening anyone.

The Pentagon orders an additional 3,000 US soldiers to be sent to Poland to reassure allies. Meanwhile, a number of countries called upon their citizens to leave Ukraine, with some warning that a military evacuation will not be guaranteed in the event of war.

Biden and Putin hold talks via video conference. The US president says a Russian invasion of Ukraine would cause “widespread human suffering” and that the West was committed to diplomacy to end the crisis but “equally prepared for other scenarios”.

Putin complains in the call that the US and NATO have not responded satisfactorily to Russian demands that Ukraine be prohibited from joining the military alliance and that NATO pull back forces from Eastern Europe.

Yuri Ushakov, Putin’s top foreign policy aide, says that while tensions have been escalating for months, in recent days “the situation has simply been brought to the point of absurdity”.

He says Biden mentioned the possible sanctions that could be imposed on Russia, but “this issue was not the focus during a fairly long conversation with the Russian leader”. 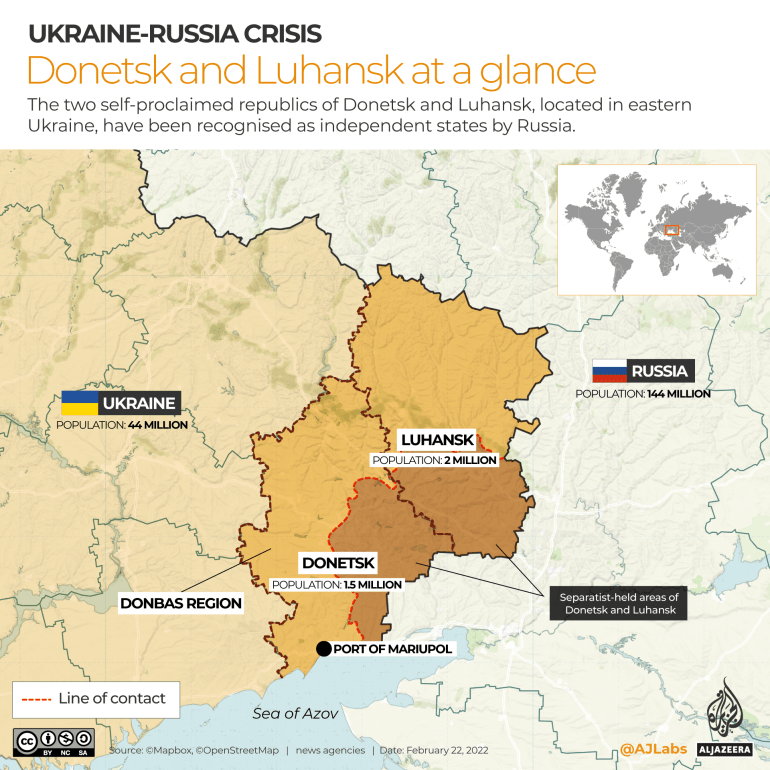 “This is a military that, that continues to grow stronger, continues to grow more ready. They’re exercising, so we believe that he has a lot of capabilities and options available to him should he want to use military force,” Kirby tells MSNBC in an interview.

“As we said, it could happen any day,” he says.

Putin says he was “ready to work further” with the West on security issues to de-escalate tensions over Ukraine, but emphasises the need for the West to heed Russia’s main demands.

German Chancellor Olaf Scholz in Moscow says at a briefing that he agrees with Russia’s assessment that there is still a chance to avert war over Ukraine and that “diplomatic options are far from exhausted”.

NATO says there is no sign of Russian de-escalation as it tasks its commanders to work out details for the deployment of battlegroups to the alliance’s southeastern flank.

Meanwhile, Secretary of State Antony Blinken says the United States has yet to see any evidence of a significant Russian withdrawal of its military forces from near Ukraine’s frontiers, despite claims from Moscow that a pullback was under way.

Biden and Blinken warn that Russia could be on the brink of invading Ukraine amid an apparent failure to withdraw troops from its side of the border and accusations of a possible false-flag operation in Ukraine’s east.

NATO’s Secretary-General Jens Stoltenberg also voiced concern that Russia may be attempting to “stage a pretext” for an attack on Ukraine following reports of shelling in the country’s conflict-hit east.

Biden says he was “convinced” Putin has made a decision to invade Ukraine, warning Moscow against starting what he called a “war of choice” that would be catastrophic.

But the US president says the door for diplomacy remains open. Until war breaks out, “diplomacy is always a possibility”, Biden tells reporters.

The announcements come as pro-Russian rebels and Ukraine accuse each other of fresh attacks, and Kyiv says a Ukrainian soldier has been killed in separatist shelling.

Putin recognises two breakaway regions in eastern Ukraine, Donetsk and Luhansk, as independent entities and then orders Russian troops to “maintain peace” there.

Putin’s announcement paves the way for Russia to openly send troops and weapons to the long-running conflict pitting Ukrainian forces against Moscow-backed rebels.

Biden announces what he calls the “first tranche” of sanctions against Russia, including steps to starve the country of financing.

The US earlier said Russia’s deployment of troops into two Moscow-backed, self-proclaimed republics in eastern Ukraine amounts to the “beginning of an invasion”.

Ukraine’s parliament votes to approve a national state of emergency in response to the threat of a Russian invasion.

The measure is overwhelmingly approved on the same day that Moscow begins to evacuate its Kyiv embassy and Washington steps up its warnings about the chances of an all-out Russian attack.

Russian forces unleash an attack on Ukraine, as Putin demands the neighbouring country’s army lay down its weapons.

In an address broadcast on state television,

“We urge you to lay down arms immediately and go home. I will explain: all servicemen of the Ukrainian army who comply with this requirement, can freely leave the area of military actions and return to their families,” he says in an address broadcast on state television.

Putin also urges other nations to not intervene.

“Whoever would try to stop us and further create threats to our country, to our people, should know that Russia’s response will be immediate and lead you to such consequences that you have never faced in your history. We are ready for any outcome.”