As diplomatic efforts to defuse tensions around Ukrainian continue, satellite images show new field deployments of armoured equipment and troops from Russian garrisons in what an analyst says could point to an increase in military readiness.

US company Maxar Technologies, which has been monitoring Russia’s military build-up along the border with Ukraine for weeks, has released new images suggesting several large movements of battle groups around the military garrison at Soloti, Russia, as of February 13.

The images released on Sunday, which have not been independently verified, showed most combat units and support equipment at Soloti had departed. But extensive vehicle tracks and some convoys of armoured equipment were seen throughout the area, the company said.

“This new activity represents a change in the pattern of the previously observed deployments of battle groups [tanks, armoured personnel carriers, artillery and support equipment],” Maxar said in a release.

Some equipment has also been deployed east of nearby Valuyki, Russia, in a field approximately 15km (9 miles) north of the Ukrainian border. A number of new field deployments are also seen northwest of the Russian city of Belgorod, Maxar said.

Based on the tracks and the snow, the activity appeared to be recent, Stephen Wood, senior director at Maxar News Bureau, told Reuters news agency.

“To me, it indicates an increased state of readiness,” he said. 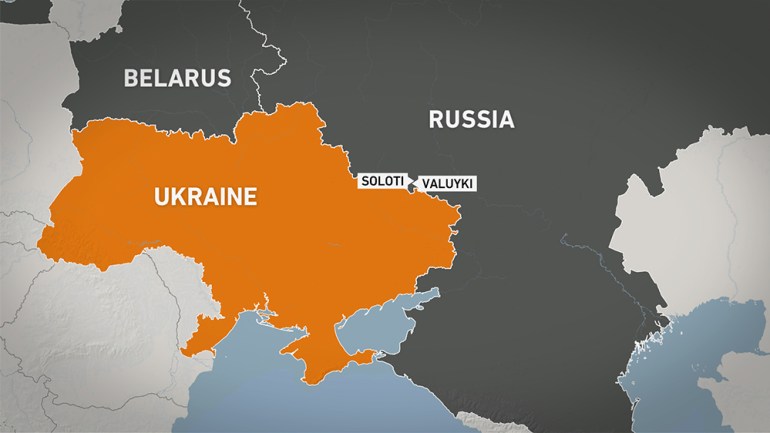 The news came as Moscow decided to continue military drills in neighbouring Belarus that were due to end on Sunday.

Belarus said on Monday that the withdrawal of Russian troops from its territory – estimated by NATO to number 30,000 – would depend to a large extent on NATO pulling back its forces from near Belarus and Russia, opening up the possibility they could remain there indefinitely.

Diplomacy is still struggling to find a breakthrough in what could turn into a “catastrophe”, as the United Nations’ chief Antonio Guterres said on Friday, referring to a potential war in Ukraine.

US President Joe Biden and his Russian counterpart Vladimir Putin on Sunday agreed in principle to hold a summit on Ukraine, after mediations by French President Emmanuel Macron.

“I have hopes that this initiative, thanks to President Macron and supported by President Biden … will be implemented,” Ukrainian Defence Minister Oleksii Reznikov said on Monday.