The United States will send a guided-missile destroyer and fifth-generation fighter jets to the United Arab Emirates (UAE) in the wake of recent missile attacks by Yemen’s Houthi rebels, Washington’s top military official has said.

In a phone call on Tuesday, US Secretary of Defense Lloyd Austin told Abu Dhabi Crown Prince Abu bin Zayed Al Nahyan the Pentagon would send the “guided-missile destroyer USS Cole to partner with the UAE Navy before making a port call in Abu Dhabi”.

Austin also told the crown prince that Washington would deploy fifth-generation fighter aircraft – a classification that includes US-made F-22 Raptor and F-35 Lighting II combat jets – to the UAE to “assist against the current threat”, according to a readout of the conversation released by the Pentagon.

He added the deployment is a “clear signal that the United States stands with the UAE as a longstanding strategic partner”, according to the readout.

The announcement comes after the UAE experienced the third missile attack in recent weeks on Monday, which the US deployed Patriot interceptors to thwart, according to White House spokesperson Jen Psaki. The Pentagon later said UAE surface-to-air missiles struck down the incoming missile.

While the UAE, which does not directly border Yemen, has not been a major target of attacks by Houthis since 2015 – when it began fighting in Yemen as part of a Saudi-led military coalition backing the country’s internationally recognised government – a January 17 attack by the Houthis appeared to signal a distinct strategic shift for the rebel group.

Seven days later, on January 24, US forces stationed at Abu Dhabi’s al-Dhafra airbase also fired Patriot interceptors during a missile attack that forced soldiers to scramble to bunkers for cover. Two ballistic missiles were shot down over the city and no one was reported injured in that assault.

The UAE hosts about 2,000 US troops, who provide early-warning intelligence and collaborates on air defence. The base operates the deployment of US armed drones and F-35 stealth fighters.

The last Houthi-claimed attack against the UAE prior to the latest series of assaults had been in 2018.

While the Houthis in recent years have largely targeted Saudi Arabia, which borders Yemen, with drone and missile attacks, the most recent assault comes after the rebel group experienced a series of defeats inflicted by the UAE-backed Giants Brigades militia in Yemen.

Though the UAE announced it had completed its phased troop withdrawal from Yemen in February 2020, it maintains influence over tens of thousands of fighters in several armed groups in the country.

Meanwhile, while the US last year suspended its “offensive support” to the Saudi-led coalition, it has repeatedly said it will continue to give military support for defensive operations to its allies in the region.

US President Joe Biden also told reporters last month that he was considering re-designating the Houthis as a “foreign terrorist organisation”, which rights groups say could drastically hinder aid delivery in the war-torn country.

Still, Andreas Krieg, a senior lecturer at the School of Security Studies at King’s College London, said the Pentagon deployment to the UAE is primarily aimed at “securing US assets in the country” and not necessarily meant to meaningfully help “with protecting the Emirates from Houthi drone or ballistic missile fire”.

He added the “gesture of support” does not mean a renewed emphasis on the region by Washington.

“The United States has no interest in getting sucked back into a conflict in the Middle East, especially not in Yemen,” he told Al Jazeera.

Yemen’s war, which began when the Houthis seized the capital, Sanaa, in 2014, has created what the United Nations calls the world’s worst humanitarian crisis.

About 2.3 million Yemeni children below the age of five currently suffer from acute malnutrition, with 400,000 expected to suffer from life-threatening severe malnutrition in the coming months, according to UNICEF.

A November 2021 report by the United Nations Development Programme (UNDP) projected that 377,000 people in Yemen would be killed by the beginning of 2022 by direct and indirect fallout from the eight years of fighting. It is estimated 70 percent of those would be children.

Following the most recent escalation in Houthi attacks, the Saudi-led coalition retaliated by conducting air raids that have killed dozens of civilians and destroyed infrastructure and services, including in the capital Sanaa, according to rights groups. 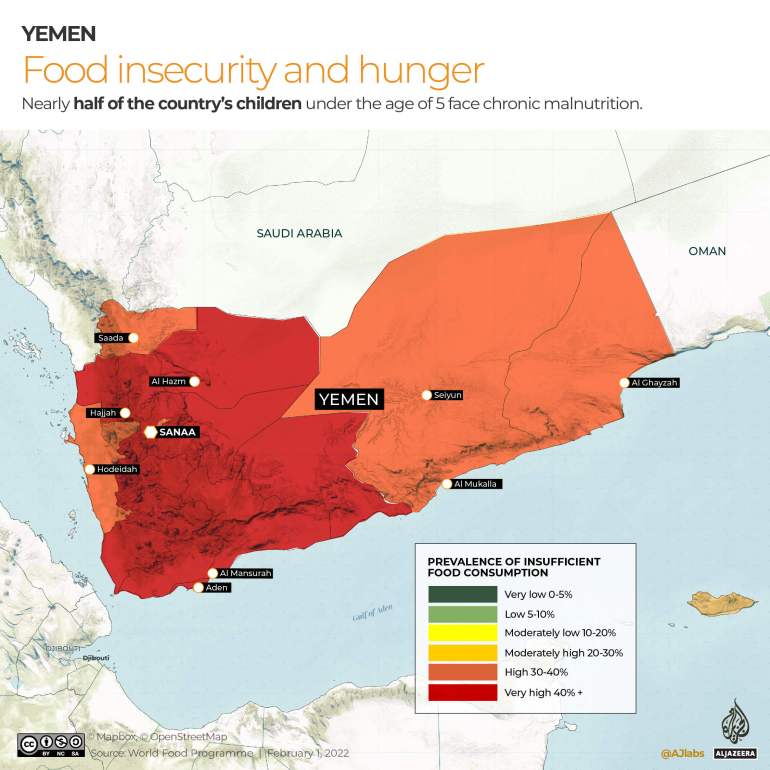