Suspected militiamen have attacked a camp for internally displaced people in the eastern Democratic Republic of the Congo (DRC), killing dozens of people, according to local sources and a monitoring group.

The overnight assault took place in the DRC’s restive Ituri province, which has been placed under a state of siege since May 2021, an exceptional measure taken by the government to combat armed groups roaming the country’s mineral-rich east.

Local officials said on Wednesday that the militiamen killed at least 60 people at the displaced persons camp. 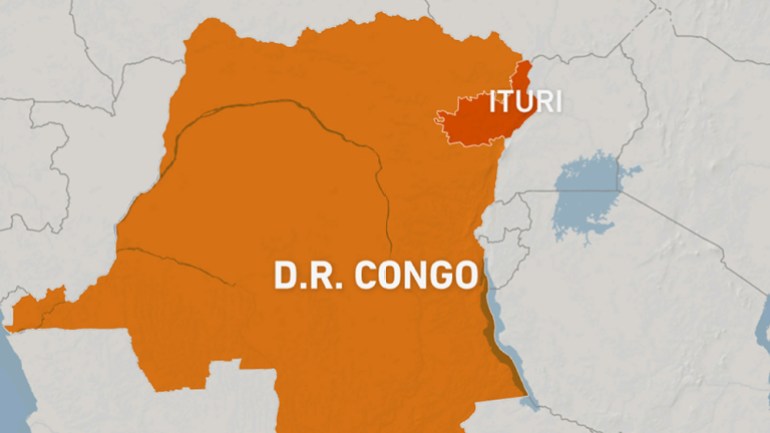 “We currently have 60 people in the shelters for the displaced who were killed with machetes and other edged weapons,” Ndalo Budz, who is the head of the camp, said to local press.

Charite Banza Bavi, president of the local humanitarian group for the Bahema-North area, put the death toll at 63, while a witness also confirmed the account.

Four people have been brought to the hospital, according to Pilo Mulindo, the head of the chiefdom of Bahema N’adhere.

There was no immediate claim of responsibility, but Budz said fighters from the Cooperative for the Development of the Congo armed group, known as CODECO, arrived at the Plaine Savo displaced persons site and used machetes and other weapons to kill dozens of people.

“I first heard cries when I was still in bed. Then several minutes of gunshots. I fled and I saw torches and people crying for help and I realised it was the CODECO militiamen who had invaded our site,” said Lokana Bale Lussa, a camp resident.

The Kivu Security Tracker (KST), which monitors violence in the region, had put the death toll at 40, adding on Twitter that CODECO fighters were suspected of being behind the raid.

The Savo displacement site was home to about 4,000 people in December, according to the UN migration agency.

A government spokesman could not immediately be reached for comment.

CODECO’s fighters are drawn mainly from the Lendu farming community, which has long been in conflict with Hema herders.

The Djugu area, bordering Lake Albert and Uganda which lie to the east, is the theatre for a bloody, long-running feud between the Lendu and Hema communities.

Hassan Khannen Je, an analyst specialising in the the Horn of Africa analyst, said the conflict has its origins in the “colonial history, in which there was a perception that the Hema community was particularly favoured”.

“This later on evolved to become an ethno-nationalist, religious cult … with a very extremist kind of approach,” Je told Al Jazeera from Nairobi.

“Their mission of what they want is not clearly articulated,” he said. “I think the extent of the kind of damage they’ve been able to do … this is a kind of situation that is likely to escalate further.”

The region – which lacks a government – encompasses more than 120 armed groups, Je said. The densely populated and vast area is quite remote, limiting access to the it while IDPs face dire circumstances, he added.

Fighting between the two groups flared between 1999 and 2003, claiming tens of thousands of lives before being quelled by a European Union peacekeeping force, Artemis.

Violence then resumed in 2017, blamed on the emergence of CODECO which claims to defend the Lendu.

Attacks on camps for displaced people over an eight-day period in November-December left 123 dead, according to the KST.