Tiraspol, Transnistria – What surprises many Transnistrians about their home is that foreigners are curious about it.

Internationally recognised as part of Moldova, the Russian-backed breakaway territory runs 400 kilometres (250 miles) along the border with southwest Ukraine.

It first garnered attention during a short civil war between Moldovan loyalists and Transnistrian separatists in early 1992 following the collapse of the Soviet Union.

Then it became a destination for adventure tourists who labelled it a Soviet time capsule due to its numerous statues of Vladimir Lenin, imposing Soviet-style architecture, and national flag – the last in the world to bear the hammer and sickle insignia.

It made international headlines in 2021 when Transnistria’s football team, FC Sheriff Tiraspol, shocked the sporting world by making it to the Champions League.

But today, most people are curious about any threat Transnistria poses to Ukraine, as Russia continues its military manoeuvres on the country’s borders.

At present, there are 1,500 Russian soldiers and peacekeepers stationed on Transnistrian soil despite calls from Moldova, NATO, Ukraine, and the United States for them to withdraw.

Russia has carried out military drills in the region as recently as February 2, and says the Russian presence is essential to protect their citizens in the area and keep the peace between Moldovans and Transnistrians.

About 400,000 people live in Transnistria, and the majority identify as Russian.

Since 2002, Moscow has been issuing passports to residents, a move that has infuriated Kyiv and Chisinau, Moldova’s capital.

Also known as the Pridnestrovian Moldavian Republic (PMR) to those who support its calls for recognition, Transnistria has its own security services, government, currency, and border control.

Tiraspol, the declared capital, is dependent on the Kremlin for gas and pension subsidies but despite this, Russia, along with all members of the United Nations, does not recognise its claim to independence. 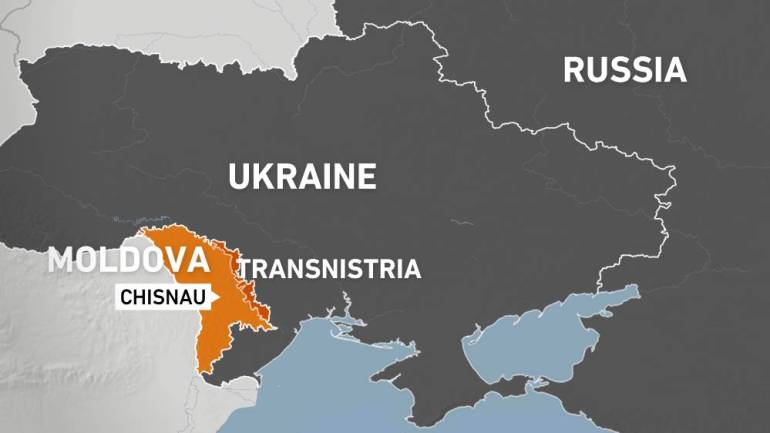 The Pridnestrovian Moldavian Republic is recognised only by the self-declared republics of South Ossetia, Abkhazia, and Artsakh.

“I feel like a Russian, my family, my friends, the people around me all feel that way too, so you grow up with it,” said Rodion Osadchy, a 30-year-old English teacher from the small Transnistrian town of Bender.

“Many older people here still identify as Soviet even though the Soviet Union doesn’t exist any more. I’ve known a few who still have their Soviet passport … All that said, many of us have neutral feelings towards what’s happening in Ukraine, everyone has family in all these countries and it’s very sensitive for us.”

The 1,000 Russian soldiers in Transnistria are there to guard 22,000 tonnes of ammunition housed in a depot in the village of Cobasna – the site is thought to be the largest ammunition depot in Eastern Europe.

While Chisinau has repeatedly called for the materials to be evacuated, Moscow has been slow on its promises to take action on the matter. About 50 percent of the ammunition is out of date.

Five hundred peacekeepers make up the Russian peacekeeping mission to the region.

Tiraspol is a quiet city with Soviet-style apartment blocks, gaudy modern hotels, and cosy shops. One company appears to own almost all of the petrol stations, supermarkets, and distilleries – Sheriff, a name synonymous with Transnistria.

Although the people of Transnistria are warm and welcoming, there is a feeling of unease about the place. People are keen to avoid political topics or serious questions about Viktor Gushan and his business dealings.

There is no press freedom in the territory and the government has been accused of cracking down on opposition candidates and civic activists. According to the non-profit Freedom House, this unrecognised state is “not free”.

“The European Court for Human Rights has found Russia guilty of human rights violations in the Transnistrian region … Moscow can influence the situation all the time and they support the situation economically, socially, politically and militarily,” says Ion Manole, executive director of the human rights group Promo-LEX.

“We cannot speak about respect for human rights in this region. The main reason for this is impunity. It’s a closed territory where journalists, specialists, lawyers, and human rights defenders are not accepted. So we cannot even monitor the status of human rights as we would like.”

Heart in the east, mind in the west

Transnistria’s population has been steadily declining due to high levels of emigration.

Although some young people have stayed behind to cater to the growing tourist trade or introduce burger bars to the otherwise traditional restaurant scene, many have moved to Poland, Germany, or Estonia.

This struggle to survive outweighs any desire to scrutinise Russian influence or even the local authorities.

“Of course, Transnistrians are pressed by the situation around us, as for my friends, some of them are quite patriotic about Pridnestrovia … others want to earn more money and they have to leave the country and go abroad,” said Katya, a young businesswoman.

“My parents are quite patriotic about Pridnestrovia, and they want it to be with Russia. They also identify as Russian … I hear from many foreigners when they come here that Pridnestrovia feels almost the same as Russia – as everything is in Russian and the people look the same. But for many of us, we don’t think about politics we just try and focus on our own life.”