The price cap on Russian seaborne oil agreed upon by the European Union, the G7 and Australia has come into force.

The cap of $60 per barrel, which took effect on Monday, is aimed at limiting Russia’s ability to finance its war in Ukraine while making sure it keeps supplying the global market.

Moscow, however, has said it will not abide by the measure even if it has to cut production. 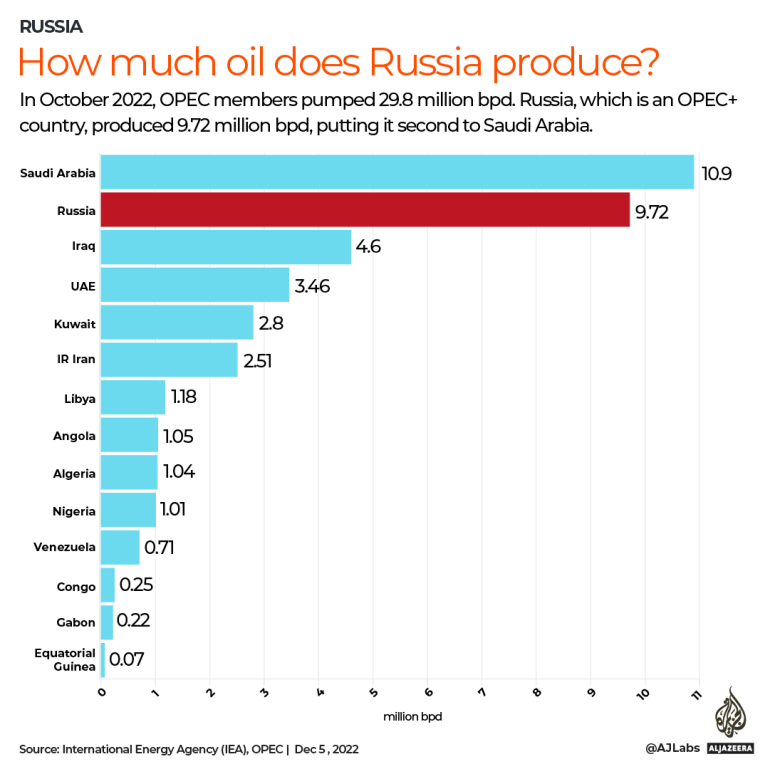 The cap comes on top of the EU’s embargo on imports of Russian crude by sea and similar pledges by the United States, Canada, Japan and the United Kingdom.

It means Russian oil sold only at a price equal to or less than $60 per barrel can be shipped to third-party countries using G7 and EU tankers, insurance companies and credit institutions. Because the world’s key shipping and insurance firms are based in G7 countries, the cap could make it difficult for Moscow to sell its oil for a higher price.

Countries that do not adopt the measure can continue to buy Russian oil above the price cap, but without using Western services to acquire, insure or transport it.

“We have clear signals that a number of emerging economies, particularly in Asia, will observe the principles of the cap,” a European official told AFP news agency, adding that Russia is already “under pressure” from its customers to offer discounts.

But Russia, the world’s second-largest oil exporter, said on Sunday it would not accept the cap and would not sell oil that is subject to it.

Deputy Prime Minister Alexander Novak said the move by the West was a gross interference that contradicted the rules of free trade and would destabilise global energy markets by triggering a shortage of supply.

“We are working on mechanisms to prohibit the use of a price cap instrument, regardless of what level is set, because such interference could further destabilise the market,” he said.

“We will sell oil and petroleum products only to those countries that will work with us under market conditions, even if we have to reduce production a little,” he added.

Selling oil and gas to Europe has been one of the main sources of Russian foreign currency earnings since Soviet geologists found oil and gas in the swamps of Siberia in the decades after World War II.

The G7 price cap, which was agreed upon on Friday, is not much below the $67 level where a barrel of Russian oil closed at the end of the day. So, the EU and G7 countries expect Russia will still have an incentive to continue selling oil at that price while accepting smaller profits.

“Russia must retain an interest in selling its oil” or risk reducing global supply and causing prices to soar, a second European official told AFP, saying they did not believe the Kremlin’s threats to stop deliveries to countries complying with the cap.

The official said Russia would remain concerned about maintaining the state of its infrastructure, which would be damaged if production is halted, and keeping the confidence of its customers, including China and India.

While Russia could be tempted to create its own fleet of tankers, operating and insuring them itself, Brussels believes “building a maritime ecosystem overnight will be very complicated” – and such make-do measures could have trouble convincing customers.

The level of the cap is to be reviewed by the EU and the G7 every two months, with the first such review scheduled for mid-January.

“This review should take into account … the effectiveness of the measure, its implementation, international adherence and alignment, the potential impact on coalition members and partners, and market developments,” the European Commission said in a statement.

The cap on crude will be followed by a similar measure affecting Russian petroleum products that will come into force on February 5, although the level of that cap has still to be decided.