Russia launched at least 76 missiles at Ukrainian energy facilities and other infrastructure in its latest wave of deadly attacks that have caused widespread power outages across the country.

The bombardment on Friday hit at least four cities, killing at least two people in the central city of Kryvyi Rih. Meanwhile, one person died in the southern Kherson region, where an apartment block caught fire from shelling that proceeded the missile strikes, according to regional authorities.

Oleksiy Kuleba, the governor of the Kyiv region, said Russia was “massively attacking” Ukraine in the latest coordinated wave of raids, which have been hitting Ukrainian infrastructure since October.

“The attack is continuing. Stay in shelters and safe places,” Kuleba urged after the attacks began early Friday.

Later in the day, Ukraine’s top general said the country’s air defence had taken out 60 of the incoming missiles fired at critical infrastructure.

Ukraine’s railway operator said a number of train lines had been left without power across the country, while Kyrylo Tymoshenko, the deputy head of the Ukrainian president’s office, said emergency power shutdowns had been introduced across the country to enable repairs after damage to energy facilities in several regions.

At least three explosions were heard in Kyiv with parts of the capital experiencing power outages and water stoppages as residents flocked to subway tunnels deep underground to seek shelter.

A spokesperson for Kyiv’s military administration said Ukrainian air defences shot down 37 of 40 incoming Russian missiles in the area of the city. Regional authorities, in a statement posted on social media, called the bombardment of the city “one of the biggest missile attacks since the beginning of the full-scale invasion”.

Ukrainian air defences also shot down 10 missiles over the Dnipro region, governor Valentyn Reznichenko said in a statement on Telegram.

The southern city of Kherson as well as the central cities of Poltava and Kremenchuk also experienced outages in the wake of the attack. Mayor Ihor Terekhov described “colossal” damage to infrastructure in the northeastern city of Kharkiv.

“I ask you to be patient with what is happening now. I know that in your houses there is no light, no heating, no water supply,” he wrote in a post on Telegram.

All told, about half of Ukraine’s energy grid has been damaged during weeks of sustained attacks, according to the national provider, Ukrenegro.

Outages have eliminated home heating for many residents across the country, where temperatures on Friday hovered around minus one and three degrees Celsius (30 to 37 degrees Fahrenheit).

Russia, which invaded Ukraine on February 24, has maintained the attacks on basic infrastructure are militarily legitimate.

Kyiv, the United Nations human rights office and the head of the European Commission have said the attacks constitute war crimes by threatening civilians and stifling basic services in a country where an estimated 18 million people are already in need of humanitarian aid.

“Massive shelling, explosions. The goal of the Russian Federation is for Ukrainians to be constantly under pressure, to go down into bomb shelters almost every day, to feel discomfort due to power outages or water interruptions,” economy minister Yulia Svyrydenko wrote on Facebook after the onslaught.

“But Ukraine’s position is unchanged: let it be without light, but #withoutyou. We will endure. We will win. We will rebuild.”

The latest attacks came after top Ukrainian officials on Thursday warned of a renewed offensive by Russia in the new year, which could possibly include a novel ground offensive on Kyiv such as the one repelled in the early days of the war.

The raids also come after the European Union cleared the way to give Ukraine another 18 billion euros ($19bn) in aid.

Meanwhile, the United States military announced on Thursday it will expand training for Ukrainian forces in Germany to about 500 people per month, focused on larger-scale manoeuvres and specific weapons systems.

Ukraine’s foreign minister Minister Dmytro Kuleba seized on the latest attacks to call on allies to bolster supplies of weapons.

“For each Russian missile or drone aimed at Ukraine and Ukrainians there must be a howitzer delivered to Ukraine, a tank for Ukraine, an armoured vehicle for Ukraine,” he said on social media.

“This would effectively end Russian terror against Ukraine and restore peace and security in Europe and beyond.” 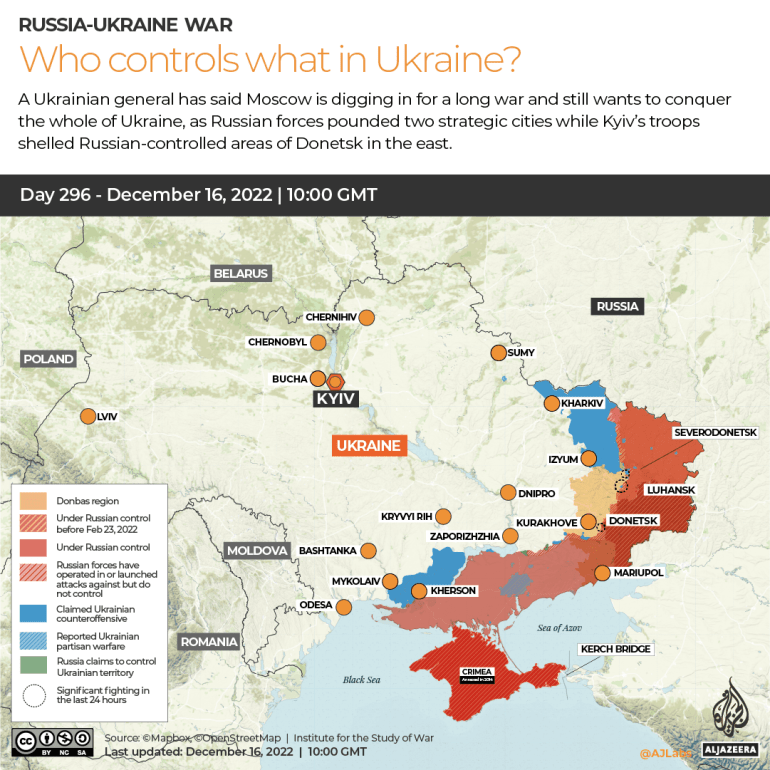