The Kremlin has said Patriot missile defence systems would be a legitimate target if sent to Ukraine to intercept the barrage of incoming Russian missiles that have crippled the war-torn country’s power infrastructure.

Former Russian President Dmitry Medvedev on Wednesday warned NATO against equipping Kyiv with Patriot missile batteries. It is likely the Kremlin will view the move as an escalation.

The comments come as Moscow said no “Christmas ceasefire” was on the cards after nearly 10 months of the war in Ukraine, even as the release of dozens more prisoners, including a United States national, showed some contact between the two sides remained.

Russia and Ukraine are not currently engaged in talks to end the fighting, which is raging in Ukraine’s east and south while Moscow has carried out missile and drone strikes on power and water facilities across the country, including the capital city Kyiv.

Ukraine has been asking its Western allies to boost its air defence system in the wake of the Russian attacks, which have forced millions of people to live without power or heat in winter.

Ukraine on Wednesday said its forces shot down 13 Russian drones that had been launched towards Kyiv.

Kyiv Mayor Vitali Klitschko said there were explosions in the central Shevchenkivskyi district and two administrative buildings were damaged but mentioned no casualties.

“It has been an unpleasant wake-up call for Kyiv this morning,” Al Jazeera’s Rory Challands reported from Kyiv.

Challands said while he did not hear the air-raid alarm, he woke up from “an enormous explosion that reverberated around the city centre”. The explosions were likely caused by drones being shot down in the air and hitting the ground, he added.

Meanwhile, Ukrainian President Volodymyr Zelenskyy said “there is no calm on the front line”, describing Russia’s destruction of towns in the east with artillery. 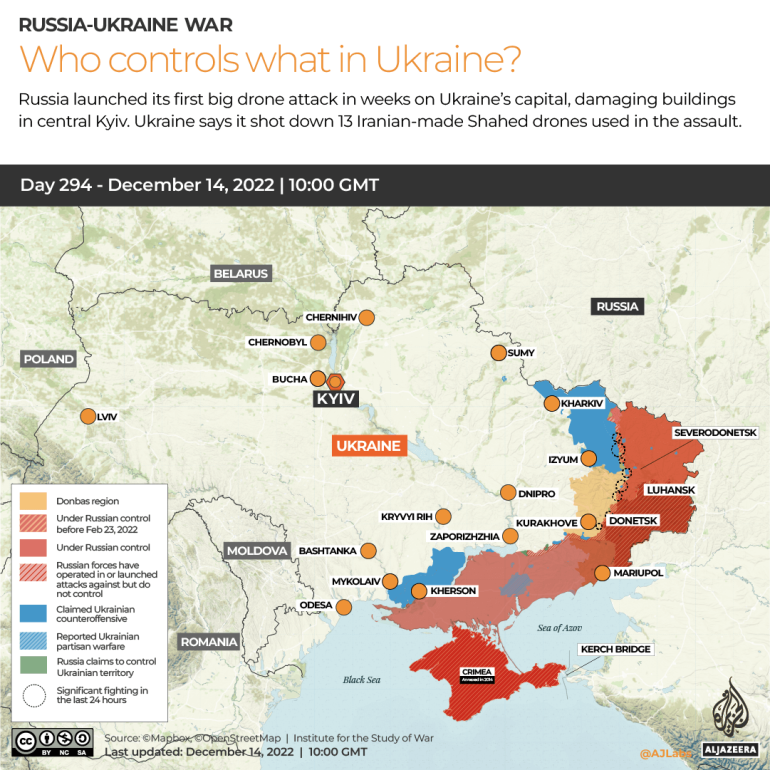 The Ukrainian president said this week Russia should start withdrawing from his country by Christmas as a step to end the conflict. Moscow rejected the proposal outright, saying Ukraine must accept the loss of territory to Russia before any progress can be made.

Russia claims to have annexed four eastern Ukrainian regions in September – a move not recognised by the international community.

On Wednesday, Ukraine said Russia released 64 of its soldiers as well as a US citizen in the latest prisoner swaps between the two sides.

The head of Ukraine’s presidential administration Andriy Yermak identified the American as Suedi Murekezi, who he said had been “helping our people” before ending up in Russian custody. The Washington Post said Murekezi was a US Air Force veteran born in Uganda.

Kirby said the scale of the ongoing violence tempered hopes for an imminent end to hostilities.

“Just given what we’re seeing in the air and on the ground in Ukraine, it’s difficult to conclude that this war will be over by year’s end,” Kirby said in response to a question about the prospects for a negotiated peace with Russian President Vladimir Putin.

“So there is active fighting going on right now. We would expect that that will continue for some time going forward.”