Asbestos – a cheap, heat-resistant mineral – was once used widely in building materials all around the world. Today, it is banned in 70 countries which have deemed that this construction material is a “silent killer” since its fibres are carcinogenic.

While there are six types of asbestos, chrysotile – white asbestos – is the most common form, used especially in roofing houses.

According to the World Health Organization, all types of asbestos cause “lung cancer, mesothelioma, cancer of the larynx and ovary, and asbestosis [fibrosis of the lungs]”.

Exposure to the fibres and handling or inhaling them could also result in death.

In 2011, India banned asbestos mining and asbestos waste used in ships. But it continues to trade in raw asbestos and asbestos-based products, commonly found in the roofs of houses, especially in poorer regions of the country. 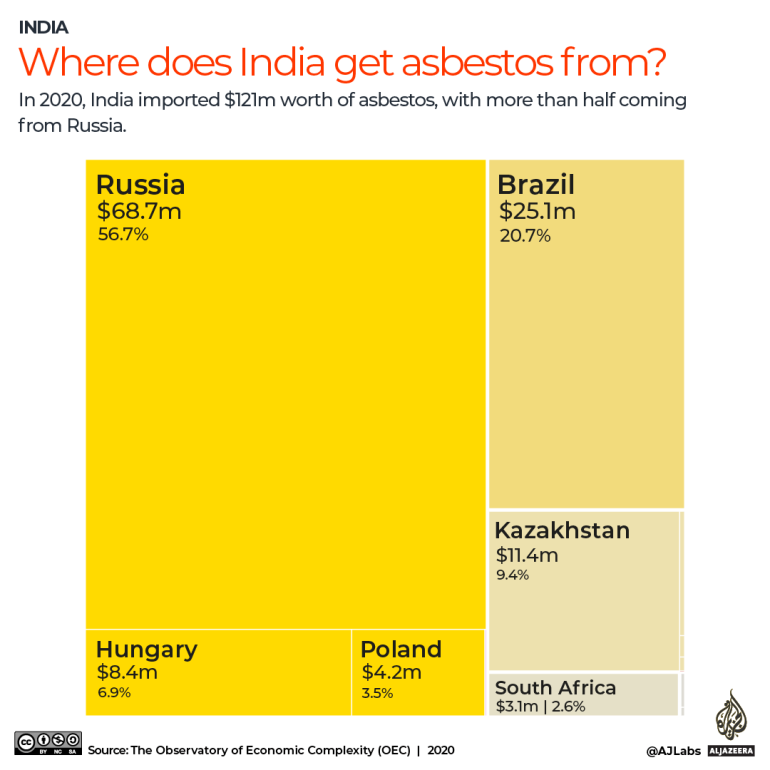 The report noted that almost the entire import was chrysotile asbestos, with 85 percent of these fibres coming from Russia. About 3 percent also came from Brazil, Kazakhstan and Hungary each, and 2 percent came from Poland and South Africa respectively.

Aaron Cosbey, a development economist and head of Small World Sustainability, a consultancy, told Al Jazeera that trade goes on because commercial interests have been prioritised over human welfare.

“India’s biggest source of chrysotile asbestos – Russia – has not banned it nationally. So there is no hypocrisy; it is just bad policy, given that the WHO and 70 states worldwide have agreed that there are no safe uses for the substance,” he said.

India also exports asbestos, but its sales have decreased substantially to 1,001 tonnes between 2019 and 2020, compared with 1,112 tonnes in the previous year.

The Indian government’s November 2021 report noted that most of the exports went to Bangladesh, and 7 percent to Sri Lanka.

Gopal Krishna, an environmental lawyer and co-founder of the Ban Asbestos Network of India, said despite countries like Brazil ruling that asbestos use was unconstitutional – and Hungary, Poland and South Africa banning asbestos – India continues with its import and export.

“The trade continues because nobody in India has time to deal with health complaints when money is involved and there is a lewd relationship between the Indian government and the asbestos manufacturers in the country,” he told Al Jazeera.

“A 2012 study (PDF) was conducted by the National Institute of Occupational Health in Ahmedabad, India, surveying 1,248 workers exposed to the substance. Noting that the fibres affected only three workers, the study concluded that asbestos and its derivatives are not harmful to human health. But this study by a government body was co-sponsored by the Asbestos Cement Products Manufacturers’ Association, which lobbies for the industry, making it a conflict of interest,” he added.

Krishna said the study contradicts the UN Rotterdam Convention, which was adopted in 2004 and reviews the harmful effects of a wide range of chemicals and pesticides.

The convention has listed white chrysotile asbestos mineral fibres as a part of its list of substances which have been banned or restricted because of their health or environmental impact.

“The Indian government is aware of the harmful impacts of asbestos, but is heavily influenced by the profit-inducing capacity of the industry. Currently, Mansukh Mandaviya, the minister responsible for chemicals and fertilisers, is also the country’s health and family welfare minister.

“So he is a promoter of trading asbestos and also the guardian of public health in the country, magnifying that incestuous relationship between the asbestos industry and politics in India,” Krishna said.

At the time of publishing, Mandaviya had not responded to Al Jazeera’s request for a response.

On the global stage, the landmark ruling in favour of banning the trade of asbestos came in 2001, when the World Trade Organization (WTO) supported a move by France to ban the substance.

The WTO had been called on by Canada to look into whether France’s ban, which was announced in 1997, was legitimate.

The WTO’s Appellate body – a seven-person committee that hears appeals – gave its verdict, saying that “dangerous substances cannot be judged to be similar to safer substances”.

“This ruling was heavily protested by asbestos trade lobbies in India who said that a trade organisation should not get involved in health matters. Their position on the matter is still the same with them also claiming that health and environmental concerns about asbestos, raised by health and environment safety bodies, are distorted,” Krishna told Al Jazeera.

“These business enterprises don’t operate on logic. They operate on profit,” he added.

The Indian asbestos lobby, which seeks to promote the use of mainly chrysotile cement products in the country, has claimed that India is plagued by a chrysotile fibre phobia.

In a 2019 article purporting to bust myths, the lobby said this was due to a lack of awareness in society about the difference between amphibole asbestos and serpentine chrysotile.

The lobby cited WHO guidance that the controlled use of chrysotile asbestos would not cause any health hazards.

But a 2014 WHO report stated that “the most efficient way to eliminate asbestos-related diseases is to stop using all types of asbestos”.

A month before the 10th Conference of the UN Rotterdam Convention took place in Geneva in June this year, the association said in a statement: “The relentless battle against chrysotile over the course of numerous conferences of the parties since the Convention was established has turned the Rotterdam Conference into an anti-asbestos conference.”

The use of chrysotile fibres is in line with the WHO and International Labour Organization’s (ILO) policy, the statement added.

Krishna said the usage and trading of asbestos began when Britain ruled India.

“India is a victim of the British legacy under which many of these companies were set up in the first place, even when the British knew its harmful effects,” he said.

The British Medical Journal has been reporting on asbestos since 1924, he added, “so since then, the subcontinent has not been free of asbestos, especially in building materials”.

So far, the Indian government has phased out the use of asbestos in the railway sector by making more than 7,000 railway stations asbestos-free. New Delhi has also issued a working conditions code for companies involved in handling the substance.

But the government’s November 2021 trade report noted that trade will continue.

Krishna, intent on his mission, says campaigning will be key in pushing demand down.

“People need to be educated about it in schools, so that they understand how the industry works and what the health hazards are,” he said. “Only then will they be able to make a decision about the substance, which could indirectly influence the demand and supply of asbestos.”