Russian attacks on Ukraine’s energy infrastructure are a justified response to inherent threats, Foreign Minister Sergey Lavrov has said in a televised press conference that lasted more than two hours.

“This infrastructure supports the combat capability of the Ukrainian armed forces and nationalist battalions,” Lavrov said Thursday in an online news conference, claiming that Moscow’s actions are, in fact, aimed at minimising the number of civilian casualties.

He said that the recent barrage of Russian missile attacks was intended to “knock out energy facilities that allow you to keep pumping deadly weapons into Ukraine in order to kill the Russians”.

Waves of missile attacks on Ukrainian energy infrastructure since October have left millions of people cut off from electricity and heat and, in some cases, water.

Dozens of civilians have died in nationwide attacks.

Lavrov also ranted against the US and its NATO allies, accusing them of trampling on international law while trying to isolate and destroy Russia.

He claimed that the US has tried to discourage other countries, including India, from maintaining close ties with Russia, but those attempts failed.

Russia, which invaded Ukraine on February 24, insists it does not target civilians. In some cases, it has blamed Ukraine for attacks on Kyiv.

But Ukraine and the West say Russia is targeting key civilian infrastructure in a bid to lower morale and force Ukraine into peace talks – on Moscow’s conditions.

Lavrov said Russia has “never asked for talks but always said that we are ready to listen to those who are interested in a negotiated settlement”.

At the same time, Russia’s top diplomat accused NATO and the US of similar warfare tactics in the recent past.

“Compare the hysteria unleashed in the Western media now with what happened when the US bombed Iraq,” he said.

In the former Yugoslavia, NATO also bombed the TV centre in Belgrade on the grounds that it served enemy war propaganda, Lavrov said.

The Kremlin has urged Ukraine to acknowledge Crimea, which Moscow annexed from Ukraine in 2014, as part of Russia and recognise other land gains made during this year’s conflict.

It also has continued to push for guarantees that Ukraine will not join NATO, and for vaguely formulated “demilitarisation” and “de-Nazification” goals.

Asked if a meeting between Russian President Vladimir Putin and US President Joe Biden is possible, Lavrov said “we don’t shun contacts” but added, “we haven’t yet heard any serious ideas yet”.

Lavrov said US Secretary of State Antony Blinken has raised the issue of US citizens imprisoned in Russia in a phone call, but noted that Putin and Biden agreed to set up a separate channel of communication between special services to discuss the issue when they met in Geneva in June 2021.

“It’s working and I hope that some results will be achieved,” he added.

The Biden administration has been trying for months to negotiate the release of WNBA star Brittney Griner and another American – Michigan corporate security executive Paul Whelan, through a possible prisoner swap with Moscow. 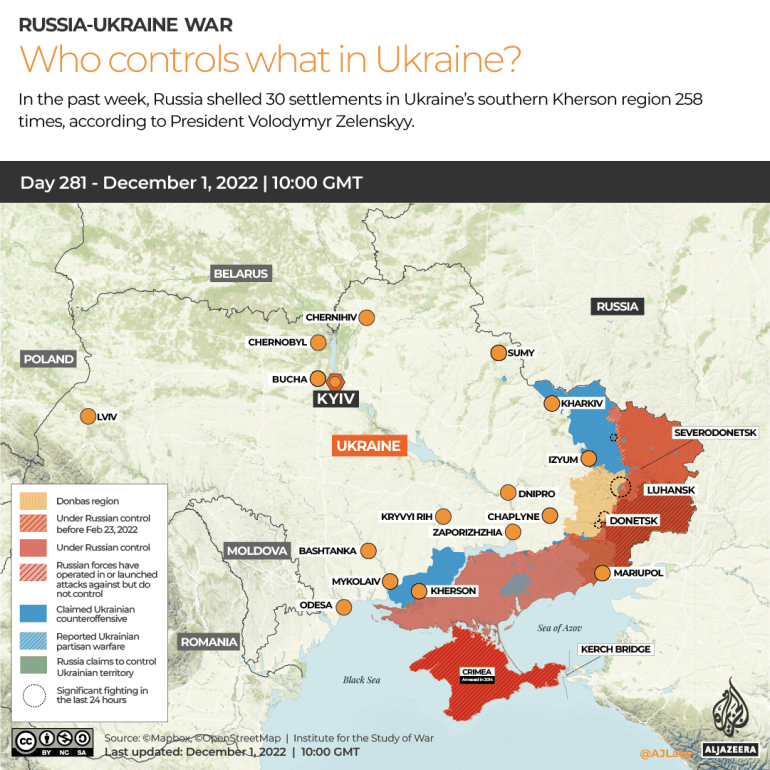 Commenting on Russia’s decision to postpone a round of nuclear arms control talks with the US that was scheduled for this week, Lavrov argued that “it’s impossible to discuss strategic stability nowadays while ignoring everything that is happening in Ukraine”.

“The goal has been announced to defeat Russia on the battlefield or even destroy Russia,” he said. “How can the goal of defeating Russia not bear significance for strategic stability, considering that they want to destroy a key strategic stability actor?”